And that title is what happens when I start running out of ideas.

I’ve always wanted a jetpack. I think that’s a pretty universal desire. I don’t think I would even be able to pilot such a thing, let alone keep from vomiting into my helmet from motion sickness. But that’s what we have videogames for, to live out our fantasies.

While visiting Capcom at CES, after checking out the real Dark Void, I was given an opportunity to put the DSiWare “prequel” through its paces. It’s looking like it might be one of the best games to hit Nintendo’s portable marketplace. That might not be saying a whole lot, but it’s certainly something.

Hit the jump and I’ll go into more detail. 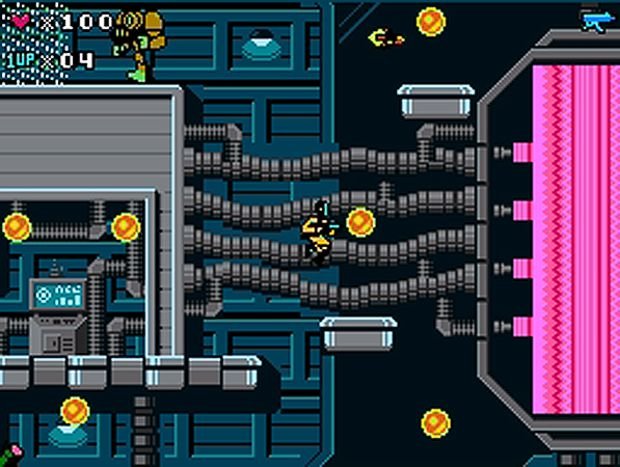 Dark Void Zero might not have an actual history as a planned 8-bit title, but you wouldn’t know it from playing the game. It has all the hallmarks of a Capcom game of the era, with precise controls and a considerable level of difficulty.

Taking the role of Nikola Tesla’s first test subject, Rusty, players fight and fly through three levels of hectic shooting and exploration. There’s a real arcade sensibility at work in the title, with lots of score increasing items scattered throughout the levels, tons of enemies and power-ups being lost after death. Even the game’s calling card, the jetpack, must be re-collected should you meet with a mishap and have to traverse a section again.

Jetpack flight is easy to control and has two different modes. Holding the jump button while in the air activates upward thrust that ends upon release. Alternately, a quick double-tap puts the pack into a hover mode, giving freedom of movement without the effects of gravity. The former feels faster but is quite a bit more difficult to control, especially when trying to shoot enemies. 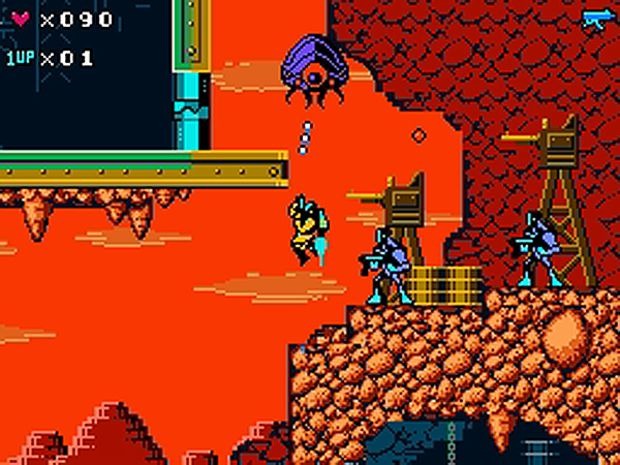 Rusty can fire his weapon in eight directions, an absolute necessity of the design which finds the player perpetually surrounded by threats. Gun emplacements seem to exist everywhere you turn and enemies run about on many of the ground surfaces. The shooting works well most of the time, but can be frustrating on the ground. Rusty has the ability to duck but is unable to fire directly forward while doing so, something which is sure to annoy from time to time.

It’s still a lot of fun to play, and fans of challenging platform games will likely be sated by the experience. While we couldn’t get the folks at Capcom to give us an exact release date, it was suggested that Dark Void Zero would be finding its way to the DSiWare store the same week as the console title.