Sony brought along some of the upcoming PlayStation Network games to CES this year, and Rag Doll Kung Fu: Fists of Plastic is one of the coolest ones we’ve played. This is a multiplayer party fighter, kind of like the Smash Bros. games, but with a shift of focus from Nintendo characters to nonsense and plastic-y characters that look like toys.

Rag Doll is laced with unconventional attack controls that use the SIXAXIS motion-sensing capabilites to do things like throw fireballs of chi energy at opponents. Of course, there’s standard controls for you to mash. Face buttons give you kick, punch and jump commands, and the R1 button will let you lift and throw just about anything, including your opponents. If you manage to pick up a pair of nunchucks or a staff, thrashing about the right analog stick will let you get crazy on those around you.

The Chi attacks let you build up energy to literally fling at your enemies. After you’ve amassed enough, holding down the L1 button and flicking the controller in a direction lets you throw it like a massive fireball. 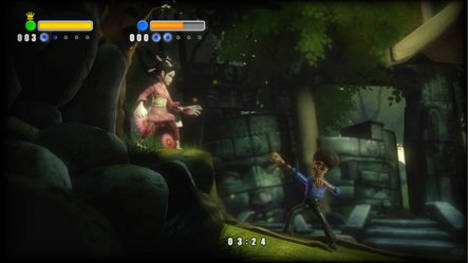 The SIXAXIS motion sensing is also used in recovery. If you take too many hits and are about to die, you can move away from the action and flip the SIXAXIS controller upside down. This causes your character to float and meditate, slowly building back your health. Of course, you’re vunerable to attacks during this period, so you’ll want to use this sparingly.

Conrad and I went up against a Sony rep. He was busy talking about attacks, so I beat him down whenever he wasn’t looking. Going up against Conrad — who was actually, you know, fighting — was pretty fun, too. Rag Doll Kung Fu is a simple, good-looking, silly-ass brawler with a few neat SIXAXIS controller twists that are fun additions, and do not get in the way of the easy-to-approach gameplay you’d expect from a party brawler. Good stuff. We’re looking forward to the spring 2009 release on the PlayStation Network.