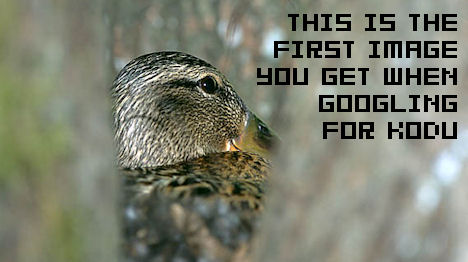 At its CES keynote speech moments ago, Microsoft announced a new addition to the Community Games Channel, called simply Kodu. A game designed to “turn Xbox 360 players into creators,” Kodu is a new piece of software hoping to hop aboard the “user generated content” train that is proving so quasi-popular lately.

Giving a demonstration “with an actual 12-year-old girl,” Microsoft’s President of the Entertainment and Devices Division, Robbie Bach, demonstrated the service, which actually looks like it might have potential. Granted, we have no idea what was actually going on as Bach went looking for imaginary rocks among musical trees with a pre-teen girl calling herself “Sparrow” … but it looked kind of cool.

It’s also worth noting that this game was originally titled Boku, or at least shows ridiculous similarities. No idea why the name changed, but we have seen slivers of this game before.

This is sure to draw comparisons with Sony’s LittleBigPlanet, but Kodu looks like it might be a cool little program for younger kids. Whether the Xbox 360 has the right audience for it, however, is another question. Let us not forget how successful games like LIPS have been so far.

Microsoft announced today that it will turn Xbox 360 players into creators with the release of their new game, “Kodu”. Launching on the Xbox LIVE Community Games Channel, “Kodu’s” easy to use game creation techniques will make building personal playgrounds simple for anyone, with the help of an Xbox 360 controller. During a keynote speech at the annual Consumer Electronics Show in Las Vegas, 12-year-old student, Sparrow joined Microsoft’s President of the Entertainment and Devices Division, Robbie Bach on stage to demonstrate the intuitive game that lets players choose from a variety of visual building blocks in order to develop their own unique creation.

This spring, “Kodu” will find its home among some of the freshest, most diverse and creatively independent games showcased on the Xbox LIVE Community Games Channel. “Kodu” is a pick-up-and-create game where anyone can build their own unique world in just minutes using a simple image-based creator menu that makes game creation simple for anyone, from ages seven to 70. “Kodu” created playgrounds are expressed in physical action-reaction terms, using basic concepts like vision, hearing and time to control your character’s behavior. Players can start their own unique “Kodu” created playgrounds from scratch or, if they aren’t in the mood to create, they can choose from several pre-loaded levels for quick play. With almost 200 different game-creation building blocks to choose from, the opportunities are endless.

“We’ve done everything possible to make sure that creating a “Kodu” playground is not only easy, but that it is also fun and engaging for people of all ages and backgrounds,” principal program manager for Microsoft Research and lead “Kodu” designer, Matt MacLaurin said. “Since ‘Kodu’s’ interface is intuitive and prevents common programming mistakes, we’re making it easy for everyone to enjoy the magic of game creation.”

Originally designed by Microsoft Research as a learning tool for young kids, “Kodu” is the newest game to keep minds of all ages sharp by developing logic, problem-solving and creative thinking skills. In fact, in 2006, Microsoft Research teamed up with Girls Inc. and the University of Santa Barbara to create an after school “Kodu” program to accurately measure the influence educational games have in the fields of math, science, and comprehension. The team logged hundreds of hours of “Kodu” research with creators from ages five to 45 to ensure that it is easy for beginners, but maintains a depth of content for those who are more advanced.

“What I love about “Kodu” is that I can do everything myself,” Sparrow, who demoed the game, said. “It’s fast to build and different from the other games I play. I can do cool, silly things in it!”

More detailed information about “Kodu” and Community Games can be found by visiting https://creators.xna.com.