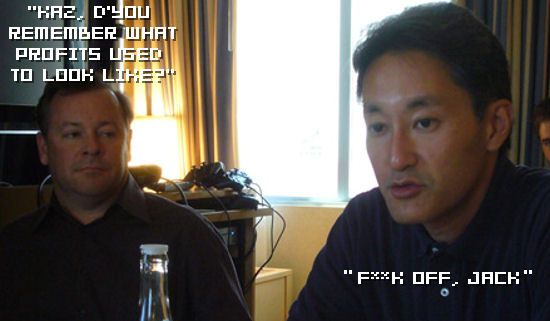 Speaking at the Consumer Electronics Show, everyone’s favorite Tekken character lookalike Kaz Hirai has made an encouraging claim for investors — the PS3 may make money one day! As we all know, the PS3 is currently a profit whirlpool, sucking profit into its murky depths and negating any cash made with software, the PS2 and the PSP. It’s not all doom and gloom, however, as an optimistic Kaz is quick to point out.

With costs reducing, Kaz hopes that Sony will be on the “positive side of the equation” in due time. The new fiscal year begins in April and Hirai is aiming for profits before it’s over. A tall order, considering how damaging the thing has been for Sony thus far, but far be it from us to discourage a man with ambition.

[Thanks to Aerox, the bubbly chocolate]