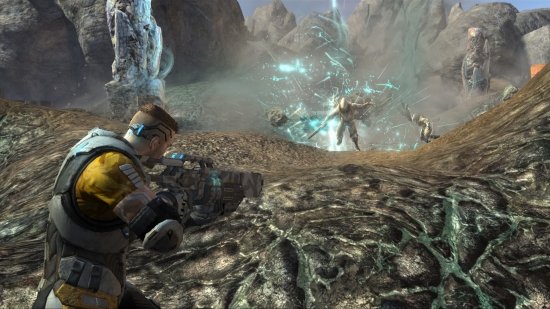 The fine folks from LucasArts invited us to a private showing of their new, next-generation IP, Fracture.

In the Fracture world, the United States aren’t so united anymore. In the 2100’s, global warming causes The Great Flood, and this splits the country into two parts. The East coast becomes the Atlantic Alliance, and they side with Europe to focus on cybernetics. The West becomes The Republic of Pacifica, and they side with Asia, choosing genetics over cybernetics. The Atlantic Alliance isn’t pleased with this choice, and this eventually leads to the United States becoming a battlefield.

LucasArts demoed Fracture on an Xbox 360. The action shooter is coming to both the Xbox 360 and the PS3, and they explain that these are the only consoles that can handle its next-generation gameplay. When I saw it in action, I understood why.

Hit the jump to read more on Fracture.

A big part of the gameplay relies on terrain deformation. As a demolition expert from the Atlantic Alliance, you’re armed with various weapons that can the terrain to do amazing things. Flat ground can become a hill, molten lava spikes can raise out of the ground to become pillars, and earth can collapse below your feet. This makes for almost endless gameplay possibilities, and witnessing the terrain being dynamically altered in real time made me understand why this would only work on the PS3 or Xbox 360.

Early in the demo, our demolitions expert was encountered by several Pacificans. The terrain was wide open, and the player was at a disadvantage. This was remedied by a couple of grenades to the ground; when they exploded, hills sprung up, making instant cover.

Being able to reshape the terrain strategically is only one aspect of the terrain deformation gameplay. Hidden pathways and puzzle solutions are uncovered by using the correct type of terrain deformation. Standing on a pillar of earth forced out of the ground provides navigational benefits. The possibilities seem endless, and are only limited by how much ammo is available.

As you’d expect from a next-generation LucasArts title, Fracture is gorgeous. The look is decidedly sci-fi, and even though the game’s main gameplay mechanic involves drab, brown earth, the visuals do not fail to impress.

The single-player gameplay I witnessed was enough to sell me on the title, but LucasArts says to expect intense multiplayer action on top of this. We’ll have to wait until Summer of 2008 to get our hands on this, but it already looks like Day 1 Studios and LucasArts have a new hit on their hands.