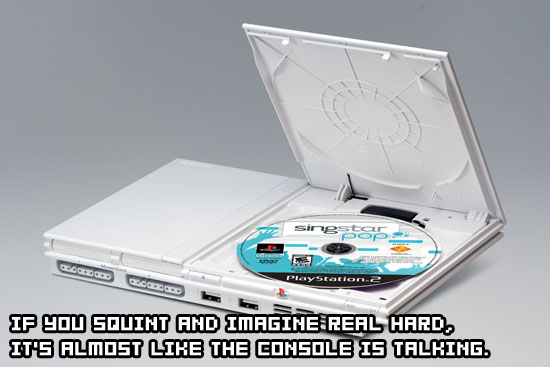 Bored this weekend? Do you need a white PlayStation 2, and are just dying to get involved in some competitive karaoke action? Sony’s got what you need, as they’ve announced that the limited-edition SingStar PlayStation 2 Pack will be available at select retailers starting today.

The $149.99 bundle includes the limited-edition Ceramic White PlayStation 2 (as shown above), and a copy of SingStar Pop, which also ships with two microphones. The best part about this? The console’s white finish will allow you to blow coke off of the top of it without leaving all of that noticeable residue.

The SingStar PlayStation 2 Pack should be available nationwide starting on November 4, two days before my birthday. Is that a strong enough hint, or what?

At such an attractive price point, this new limited-edition bundle makes social gaming more affordable than ever, and is the perfect companion to holiday get-togethers with friends and family. SingStar Pop puts players center stage in their living rooms with their favorite artists, singing duets and one-on-one battles, and even singing with up to eight players in a “Pass-the-Mic” party game. SingStar Pop also is available separately as a standalone game, with or without microphones.

Players who want to rock the mic on even more songs can check out three additional SingStar titles currently available in North America as standalone games: SingStar™ Rocks!, SingStar™ Amped, and SingStar™ 80’s.

SingStar, along with Buzz!, have proven to be successful social gaming franchises for the PlayStation 2 platform, and this new bundle delivers great value, making it easier for first-time and casual gamers in particular to experience social gaming entertainment.

PlayStation 2, celebrating its seventh anniversary today, continues to be the best-selling gaming system on the market with more than 120 million units shipped worldwide. A further 12 million PlayStation 2 units are expected to be sold worldwide by the end of March 2008. With more than 160 new games expected in North America throughout the holidays and by the end of March 2008 – including Guitar Hero™ Encore: Rock the 80s™, Rock Band, Buzz!™ The Mega Quiz and Buzz!™ Junior: Jungle Party –  as well as a back catalogue of over 1,400 games, the new limited-edition SingStar PlayStation 2 Pack makes for an extremely compelling package for the entire family.