I don’t know Split from Atom

The Internet. It’s a place where cats reign, where strangers will give you DIY tips for making fucking machines [as in machines to sex; I am not being overly enthusiastic about the general idea of machines], where Silicon Valley venture capitalists will whine on Twitter that there’s “nothing to do” in San Francisco and that the city lacks culture because there aren’t enough fancy carpet stores.

It is a public place, a nascent extension of our real world selves that we’re still not quite sure socially how to handle. Otherwise ZenSephiroth89 wouldn’t be telling gamenvape to kill himself over his stance on the subs-versus-dubs debate.

And so I’m not quite sure how I ended up back on Agar.io, a free game you can play in your browser. You are a cell, a circular blob, and there are other cells floating about controlled by other real-life people. Ostensibly the goal is to get as big as possible because larger cells can devour smaller ones and self-preservation, I’m told, is a natural human instinct despite how frequently I eat food that is clearly past its expiration date (I cut the mold off, I’m not stupid).

There are, however, even smaller blobs littered around Agar.io‘s grid that are stationary and not controlled by other people. Eating them will make you bigger. So, an experiment. What if I got big through non-violence? Could I eat my way to the top in peace and then, plump on vegan balls, force my philosophy onto the others? Would I be able to do that by example, or would that require force, undercutting my moral high ground? 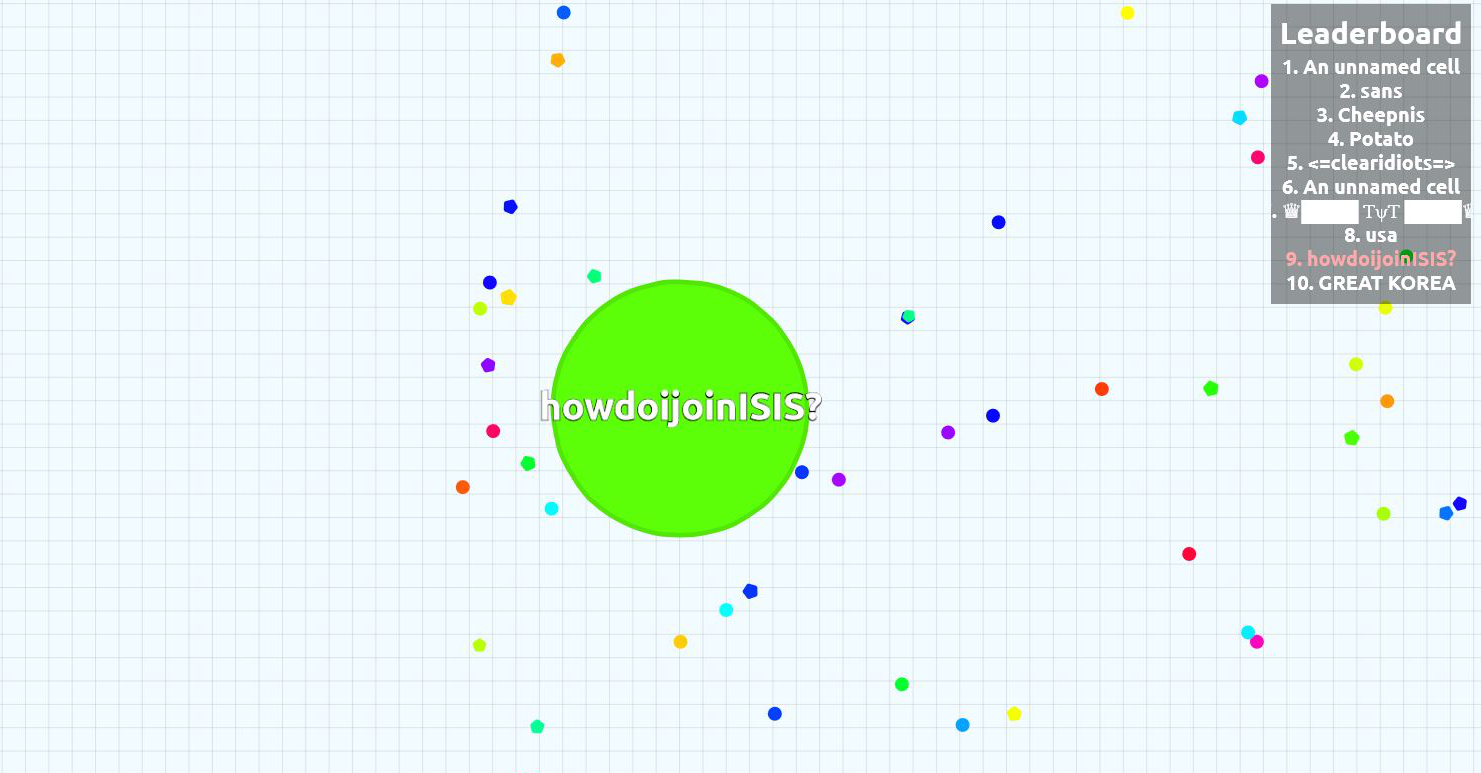 I pondered these questions as I casually jetted around with the extra speed being small affords. When you start out it’s easy to avoid the lumbering behemoths and you’re not a substantial meal, so while I occasionally hightailed it away from folks with names like “idecidewholives,” things were pretty uneventful for a while. The big boys squabbled between thmselves for rank and I was able to find plenty of balls to gobble in the southern section of the grid. I even placed on the leaderboard (10th) and that’s when things started getting dicey.

Once you become a big player on the board, the folks atop you are looking for an easy meal to plump their girth. At one frightening point I had reached the left most edge of the map and a slightly-bigger-than-me “usa” was coming up my rear. But as I fled north I was running straight into “GREAT KOREA,” then just below me on the leaderboard. I had a choice: devour the weaker “GREAT KOREA” unfortunately blocking my escape, or get et up by “usa.” I had a moment of weakness. If I offed “GREAT KOREA,” I could double right back and absorb the trailing “usa,” too.

Instead I took a hard right and lost half my gut to a fixed spike ball. Now smaller and faster, I made a full escape, and went back to consuming the non-living resources.

At some point I have to address the radical militant group in the room and, look, I realize that naming myself “howcanijoinISIS?” is probably not the best idea when trying to run on a platform of peace and nonviolence, but the latter notion came to me after I had already started my campaign and chose my name. I thought it was funny. Especially in an election year, “ISIS” oft repeated is a “Bloody Mary” boogeyman uttered in your bathroom mirror to scare your youngest, most gullible cousins until it starts to sound like a nonsense word. Coca-cola coca-cola coca-cola coca-cola coca-cola.

Ok. Here’s when things got surprising.

I continued to build myself back up through non-violence until I hit a score of something like 906 and the counter stopped ticking. I might have been too big to notice, but eating up little pips didn’t increase the ticker and didn’t seem to be affecting me growth. I was bumped out of the top 10, seemingly unable to get back there without devouring others. I wandered aimlessly thinking my experiment a wash.

And then I ran into two similar-sized cells. They were both a little smaller and as we converged accidentally from three different points, I pumped the brakes to show I wouldn’t eat them. As a show of friendship I ejected a little orb of mass in their direction and then headed away. Then, they both did the same. One of them, a blue ball called “JakeFromSt.Farm,” started following me.

You can call it an alliance, but I think “Jake” noticed I was a friendly green orb spinning my wheels on this earth and copied my example. We kept enough distance for his safety, occasionally blasting mass each others’ way not dissimilar from Journey‘s delightful chirp. I was not aggressive towards any smaller balls we passed and neither was “Jake.” We were just palling around the petri dish.

Jake about caught up to me in size so he must have realized I was stagnant, at which point something even more surprising happened: Jake split in two and sent half of his mass rocketing towards me. I couldn’t avoid eating it. He gave up half of his body for the cause.

I had an honest-to-goodness acolyte on the path towards Agar.io non-violence. I placed as high as 7th on the leaderboard. I knew I could grow stronger yet if I could convince more players to join the cause. Suddenly I didn’t have to be a stagnant, say, Switzerland, but I could maybe one day roam the board, followers in tow, turgid. A global power. I could be the USA of Agar.io except my $670 billion in “defense” would, truly, be working towards everyone’s defense because I will have done it through non-violence. A world not even Big Boss himself could envision; he, instead, choosing nuke-as-deterrent instead of leading by example.

It was a nice hope. I lost Jake in a taut dogfight (or dogflee?) and part of myself, too. I was erased from the global leaderboard. Not too long after I would be wholly absorbed, chased by “doge,” a circle with the shiba meme painted in the middle, right down the gullet of a giant red circle called “hola.”