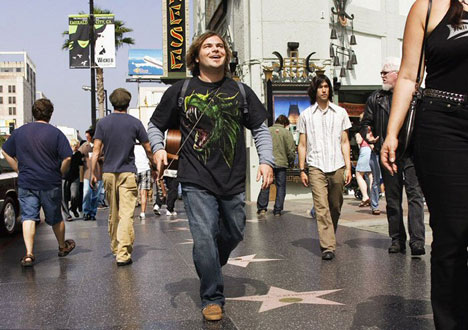 Activision and Red Bull have teamed up, suckering celebrities into scrawling their artwork all over Guitar Hero controllers. Of course, it’s all in the name of charity.

An online auction will be held April 3rd-13th to benefit MusiCares, an organization focused on providing “a safety net of critical assistance for music people in times of need.” You know, like if P Diddy gets a cold or breaks his toe, MusiCares is there. The guitars will be on public display starting March 9 through the 18th at Hi-Lo in Austin, Texas. So if any of our Austin readers want to head out to snap some shots of the guitars, please send them in!

Celebrities contributing their work include Tenacious D, That 70s Show‘s Danny Masterson, My Chemical Romance, and The Suicide Girls … all of them. At the same time. Get your mind out of the gutter and hit the jump for the press release.

LOS ANGELES, March 8, 2007 /PRNewswire via COMTEX News Network/ — Celebrities from the music, film, art and sports worlds will use their creative talents to design and personalize Guitar Hero II(TM) video game controllers for Rock, Paint, Bid — an online auction by Activision, Inc. and Red Bull Energy Drink to be held April 3rd-13th benefiting MusiCares(R). The pieces will be on public display March 9-18 at Hi-Lo in Austin, Texas, where a surprise performance by a legendary guitarist will also mark the event.

“We are proud to be working with such an amazing list of artists and sports figures in support of this important foundation,” said Tim Riley, Worldwide Executive of Music at Activision. “MusiCares provides a much-needed safety net of critical assistance for musicians in times of need. We hope our event is extremely successful and will make a real difference in the lives of people who need it the most.”

ABOUT MUSIC CARES:
Established in 1989 by The Recording Academy(R), MusiCares provides a safety net of critical assistance for music people in times of need. MusiCares’ services and resources cover a wide range of financial, medical and personal emergencies, and each case is treated with integrity and confidentiality. MusiCares also focuses the resources and attention of the music industry on human service issues that directly impact the health and welfare of the music community. For more information, please visit www.musicares.com.