It’s the Bloody Baron, of course

At Digital Dragons this past week, Pawel Sasko, Lead Technical Quest Designer at CD Projekt Red, took apart several quests in The Witcher 3: Wild Hunt and its expansions. Since most of the quests Sasko discussed were fairly late-game and spoiler-heavy, and the rest of the talk followed the same formula, we’ll be focusing on Family Matters, the Bloody Baron quest. We’ve also attached many of the pertinent slides, and we’ll be speaking in some detail about the questline.

Family Matters continues Geralt’s quest to find Ciri, as the veteran Witcher crosses paths with the infamous Bloody Baron. The Baron met Ciri some time earlier, and will give Geralt information on her location in exchange for Geralt’s help with a Botchling – a creature born from an improperly buried stillborn fetus. Once Geralt deals with the creature and helps the Baron with his family, the Baron will put Geralt on Ciri’s path once again.

Sasko broke down the questline on a pacing graph, which “shows the curve between tension and time” – essentially mapping the level of tension the player is supposed to feel to specific moments in the quest. “The most important parts in the story are when the tension is the lowest and when the tension is the highest,” Sasko said. “That is when you want to show the important stuff in your story, when there’s something interesting, or something that you want the player to memorize.” 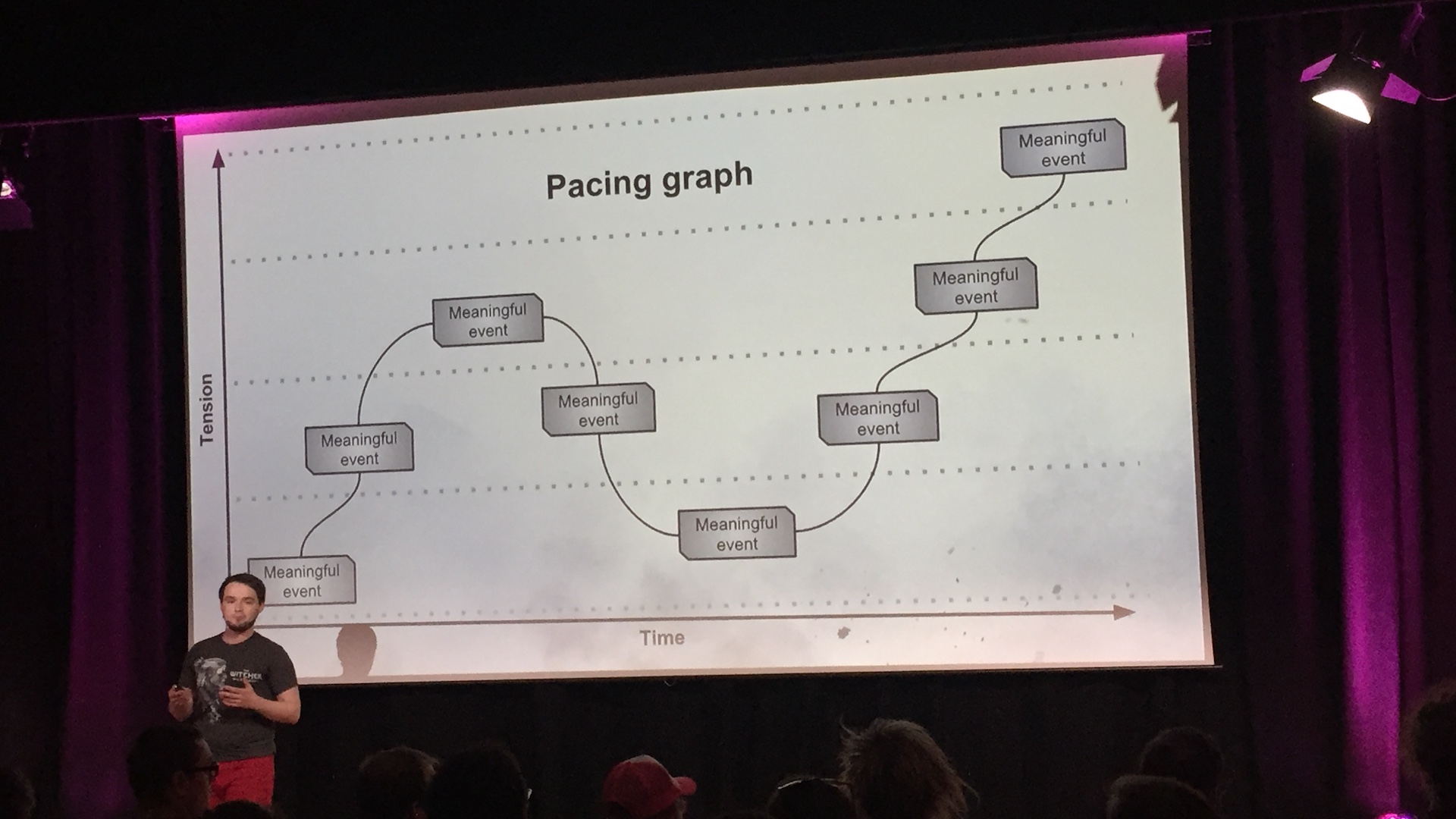 Using that graph, Sasko broke down the initial meeting between the Baron and Geralt in Bloody Baron and the Botchling ritual in Family Matters. Since the traditional film and TV pacing graph lacks any kind of notation for different types of gameplay, the graph for The Witcher 3 is color-coded. Blue emphasizes non-interactive storytelling, red is combat, and green is a mix between non-combat interactivity and storytelling – basically, walking from point A to point B while somebody talks to you about what’s happening.

“When you have too much blue scenes close to each other, it starts to look like the story’s too slow,” Sasko said. “When you have too much of the gameplay, you start to lose purpose. You feel like you actually forgot what the whole story was about, because there’s no reminder. There’s nobody telling you ‘Yeah, actually, you’re doing it because there’s a purpose. There’s a goal you’re trying to reach.'”

Each scene on the pacing graph is also defined by very general story beats, most of which revolve around the player’s interaction with the quest. With regards to the Bloody Baron sequence shown above, the game teases the player with a hint of conflict in order to pique their interest. “I get engaged, and then I get involved, and then I start to care,” Sasko said. “It starts to be important for me, because I tried to make things better.”

The quest’s difficulty curve also ties into player emotion, leading them towards catharsis while still providing the thrills you’d expect from a dark fantasy RPG. “We want the player to feel the tension, to make their involvement stronger,” Sasko said. “I’m battling monsters, I’m getting further, they’re getting stronger, but I’m managing to defeat it. This whole thing is a buildup to the burial.” 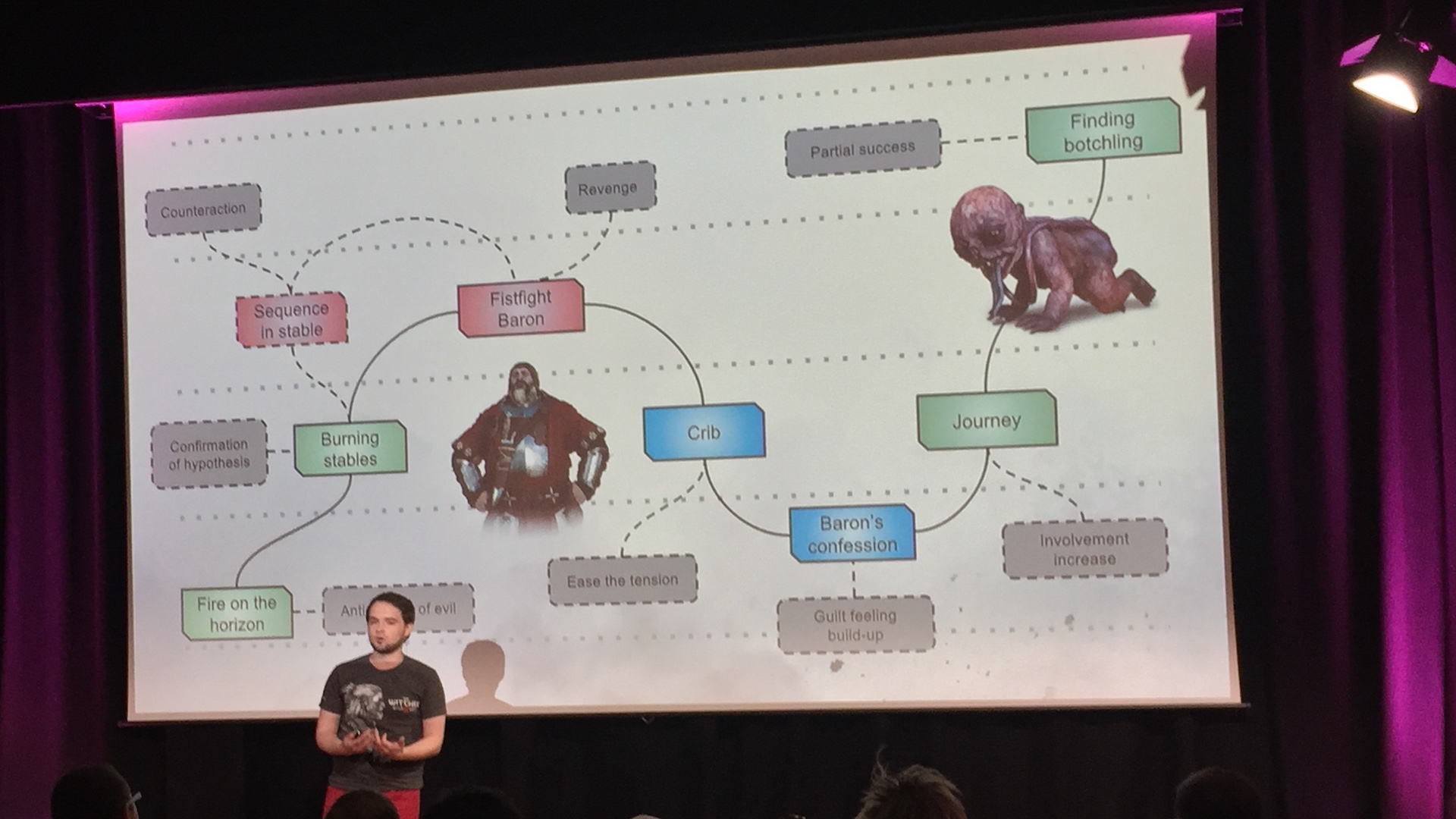 Although the botchling burial isn’t exactly the end of the Baron’s storyline, it’s a significant moment of emotional catharsis, delivered after a series of challenging fights and heady revelations. “The burial causes a huge tension release, and a lot of people cry at that moment,” Sasko said.

Sasko often watches YouTubers play the quests he’s authored, in order to make sure the game’s emotional beats hit as intended. “If this quest is built right, at some point they will get where we wanted them to be. At the moment of the burial, we wanted them to cry,” Sasko said. “A lot of people cried and I just love it. I live for the moment when people cry at my quests.”

During the Q&A, Sasko talked about how to use fantasy clichés without making the story feel rote. According to him, as long as you use cliché with some level of self-awareness, you’ll be fine. “There’s two ways to do clichés. There’s the Tarantino way, where you can do clichés but you do it very consciously. The other way is to just not use the cliché,” Sasko said. During brainstorming, the quest team will often cross out the first ideas that come to mind “because those are the clichés.”

“So, for part of our internal pipeline, designers in the quest team will play each others’ quests and give feedback,” Sasko said. “We just rework all the time. Our production is just changing things back and forth all the time.”