“We’re not going to ship a unit and then in six months it’s off the shelves and people have stopped playing it,” he said at the time. Of course, six months from now people will be buying the PlayStation 4, which may raise some doubts about the game’s longterm success. 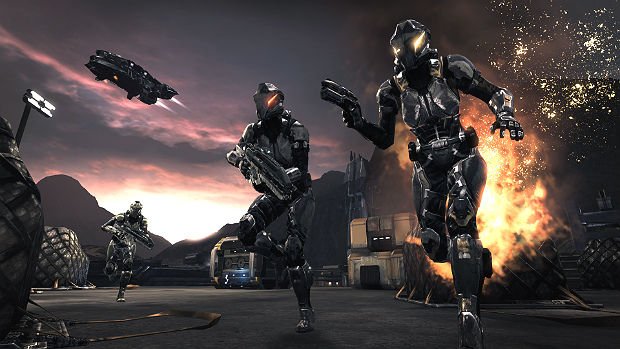 “We already see that Dust 514, during open beta, had been driving hardware sales for Sony. We actually track that together,” he tells me. “We so know that our fan base, Dust-curious players, are buying the PlayStation 3 to get into our game.”

More generally, though, Gunnarsson seems confident in Sony’s ability to support the PlayStation 3 well into the next few years. “What we hear, anecdotally, is that PS3 sales are increasing,” he says. “Sony have done a phenomenal job of managing console transitions, like they did with the PlayStation 2’s cost and size reductions,” he effuses.

“We can make the logical assumption that something similar will happen as the PlayStation 4 comes to market,” Gunnarsson continues, noting that the PS3’s large European and Asian install base and incremental success since 2006 will give it “long legs” moving forward.

His ultimate declaration on the subject is this: “If you look at the large third-party publishers, you’ll see that Sony is not falling away from the PlayStation 3. What about Grand Theft Auto V? It took Square Enix years to come to the PlayStation 3.”

Gunnarsson’s enthusiasm is partly diplomatic, I’m sure, but fans’ enduring interest in the PS3 is the crux of Dust 514‘s development strategy, which is to keep players coming back with a periodic trickle of high-quality — and, most importantly, free — updates. 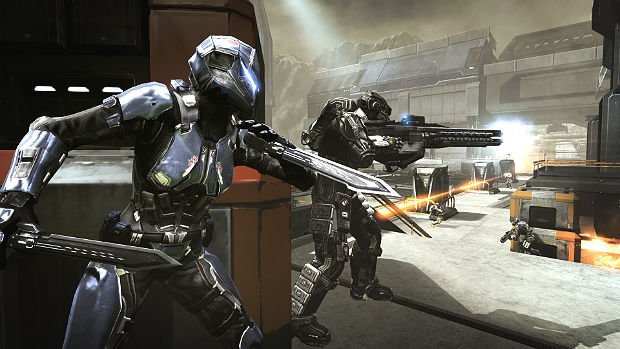 The foundation for these types of updates was laid when Dust 514 was still in open beta. Several months in, CCP rolled out a free, updated build of the game, called “Uprising,” which overhauled the game’s graphics, added content, and re-structured much of the game’s user interface and menus.

More updates — most notably, a King of the Hill mode called “Domination” — were made when the game officially launched on May 14 (get it?), only a week later.

“Here we are in the late stage of the open beta, and we’ve completely overhauled the whole thing,” explains executive producer Brandon Laurino during a brief chat. “Even for a PC MMO, that’s pretty outrageous, but you’ve never had that for a console game. You’ve never had something like a demo or a version 1.0 of something in your hands and then had a huge graphics update on it.”

Dust 514 has been officially released for less than a month now, but the Shanghai-based team responsible for it is already in active development on new gameplay modes that should be available “very soon.” (I should note that “very soon” int his case means up to three years from now.) 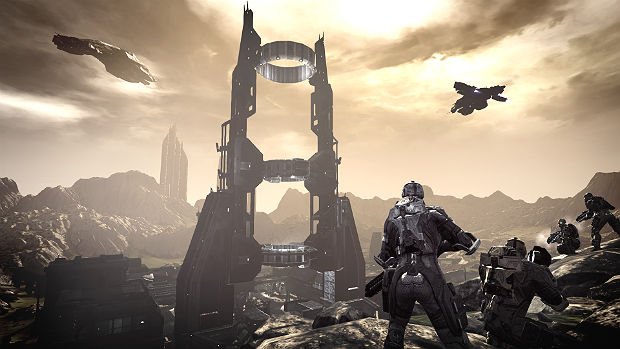 In its current iteration, Dust 514 is a competitive, player-vs.-player, deathmatch-based affair. However, CCP Shanghai are working on cooperative, player-vs.-environment modes that they hope will encourage corporation-level play: “Survival” is a wave-based Horde mode, and “Infestation” will involve scouring any enemies trying to establish a toehold in corporation-controlled districts.

In both modes, groups of players will fight against drones, the so-called “rats” or “mobs” of Dust 514, to gather money and other resources. The idea is that these PvE modes will give players and corps new entry points into the robust in-game economy that ties Dust 514 and EVE Online together. Eventually, CCP plans to implement space elevators to carry those resources from the planetary surfaces of Dust to the orbiting fleets of EVE, linking the two games physically as well as thematically, economically, and structurally.

Other upcoming modes include “Penetration,” which will allow Dust mercenaries to raid and board EVE’s Titan-class warships, and “Gladiator,” a set of organized tournaments that will include in-game betting and streaming.

The EVE universe spans hundreds of star systems and thousands of planets, each of which will need to be dynamically populated with weather patterns, terrain, vegetation, and architecture. Racially variegated weapons, vehicles, and space stations are also in the works. 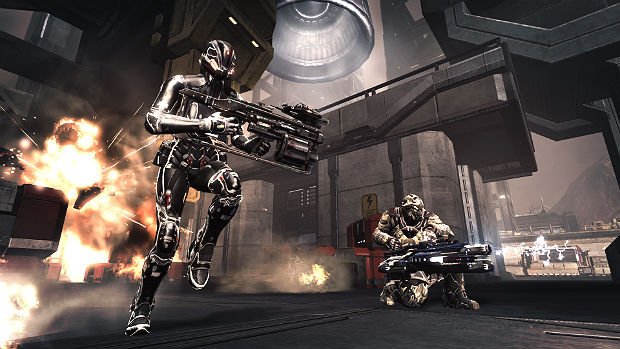 If that sounds like a lot, that’s mostly the point. “This is the way that CCP does a game,” says Laurino. “We’ll never make a Dust 514-2, right? We’ll never update the graphics, package up a bunch of content, and say, ‘Okay, now this is a $60 expansion.’”

“It’s just all part of the game as a service that we provide to our users. That’s part of the value proposition that we offer,” he continues. “‘Uprising’ is not the end of the major, free updates. We’ve got quite a few more planned for the rest of 2013 and then out for two years, out for five years, out for ten years, just like EVE.”

Still, CCP will eventually need to develop a PlayStation 4 version of Dust 514, link it to the PS3 version, and then tie both of them to Tranquility, the London-based server that governs everything that happens in the EVE universe. And they’ll do it, ideally, with as little downtime as possible.

A tall order, but one that CCP are already familiar with. “When we launched EVE in 2003, it was running on Windows XP at the time, on DirectX 7,” Gunnarsson tells me. “We migrated to DirectX 9 with a live game in operation and ran a dual rendering across DX7 and DX9 for many years. We launched the Mac version the same way.” 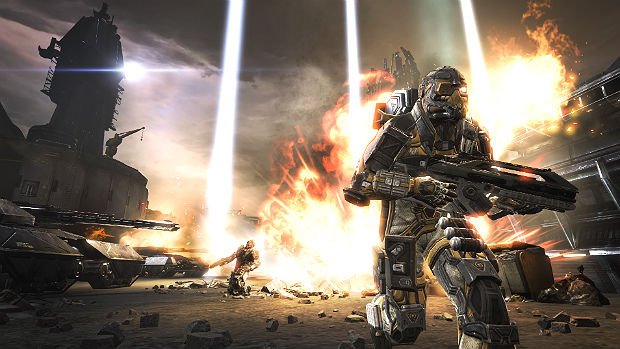 Not surprisingly, Laurino agrees, though he’s less concerned with the nitty-gritty details at this point. “Really, any game could be set up to this. So it’s more a philosophy than it is a real technical roadblock,” he explains. “Of course there are a lot of technical challenges, sure, but it’s about holding yourself to a different software development standard and a different standard for service that makes a difference.”

“It’s also just common sense,” Laurino goes on. “If you want to sustain a ten-year product in the videogame industry, you have to upgrade at some point.”

I ask Gunnarsson, somewhat dubiously, about the economics and logistics of running two different games on three platforms connected by one central server; he remains nonchalant throughout. “We’re very confident. We’ve already done this in the PC space,” he explains.

“If you think about it from that perspective, we’ve been doing this for years.”