It’s a good day for fans of action/platformers — an updated version of the indie freeware classic Cave Story finally hits WiiWare today. With updated visuals, new modes, and familiar Cave Story gameplay, it was a “must have” as soon as it was announced.

Developed by one man, Daisuke Amaya, over the course of five years, the game was originally released for PC back in 2004. In order to bring to game to a more mainstream audience (as well as get a quality update the game deserved), Amaya (who goes by the nickname “Pixel”) teamed up with indie developer Nicalis to bring the WiiWare game to life.

Nicalis’ Tyrone Rodriguez recently sat down with Pixel to pick his brain about all things Cave Story, including his inspirations, characters, sequel potential, family, and more. That conversation is after the jump.

Daisuke “Pixel” Amaya, Studio Pixel: I am Pixel, the creator of Cave Story.

Why did you call it Cave Story? Did you have other names in mind?

Cave Story was a temporary name I used during development. The name Cave Story kind of stuck and we started to feel that this simple and not overly dramatic title was perfect.

Is Metroid a big or small inspiration for Cave Story?

I believe it was a very strong inspiration. There were several games as well as things (outside of games) that were a strong inspiration for Cave Story. Among those the one of the biggest would be Metroid. More than anything else, I love Metroid (especially the SNES Super Metroid). 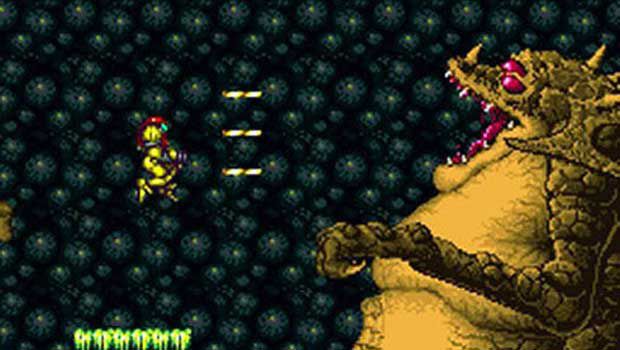 Please tell us more about the unreleased version of Cave Story.

At first I was thinking of a game that required careful bullet/ammunition management; take down enemies then use the collected money to obtain more ammunition. It was that type of game.

But then, we wanted to create a flow where you would start out using the bullets sparingly and as you proceed in the game the amount of ammunition would become unlimited. At one point, we prototyped the unlimited bullets and it felt so good that I believed my idea was a success–but on the contrary, I felt stress from the restrictions of the limited ammunition in some areas.

How much of this beta version is complete?

This may be a bit of a spoiler, but I had completed the game up to the the final showdown where Puu (final name Balrog). By this point the player will have fought against many times in the story. In this final form he’s a giant, but most of the puzzles spread around in each stage hadn’t been completed. I felt it was very shallow. Being incomplete, it also had a lot of bugs.

Are there any elements from this version that you wanted to include in the WiiWare version?

When creating the WiiWare version, we had no thoughts about the previous version. I’m not good at integrating previous elements. 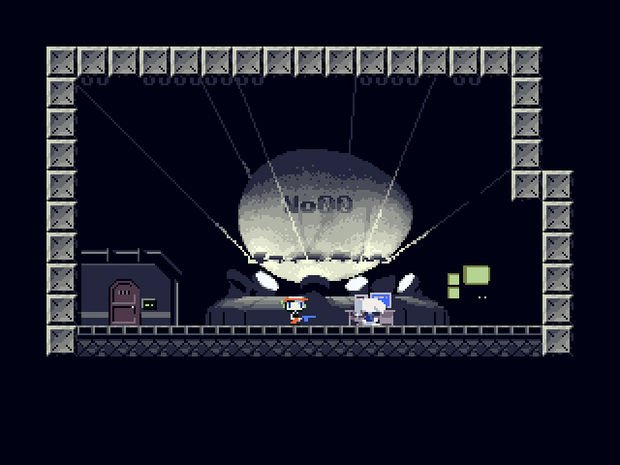 No matter what environment (PC), if it runs well on 60fps, then I will always choose 60fps, without a doubt.

However, at that time, there were lots of PC setups that weren’t 60 fps. There were environments that could set the refresh rate through the program, but there were other environments where you couldn’t. Most PC’s were at a refresh rate slightly higher than 60fps. When that happens, with a one to two second cycle, the periodical scroll of the screen shook erratically and this affected the game experience–which I didn’t like.

In the end, I made it 50 fps because there were no environments at 50 fps. Regardless what environment it’s run on there would be no adverse issues. It’s very important that the movement or motion is consistent no matter what the environment.

At first I had contemplated that it was a refresh rate problem. The environment is restricted, but when I saw how smoothly the game scrolled on 60 fps I thought there couldn’t be any other choice than 60 fps. There were several other people on the Internet who’ve had similar thoughts, but then I saw points like it’s more important to make a fun game than to fixate on the refresh rate. I remember at that time feeling like I finally reached a solution.

Early on in the game a character inside Egg Tell us about “Master’s Eggs.” Some players are under the impression that Igor is referring to the evil doctor.

I don’t usually any character settings that are confirmed or set in stone during development….

In the Egg Corridor, one of the flying dragon eggs hatches. There was a professor who managed and examined the eggs inside the Egg Corridor. This doctor was not THE doctor nor Professor Booster. (And of course not even Dr. Gero) This person does not appear in the game, but performed tests alone. Before dying from old age, this professor met a lost Mimiga (Igor). Igor loved and respected the professor and continued the work. At a later time, though, Igor ate a red flower. Players see the result pretty early on in the game. 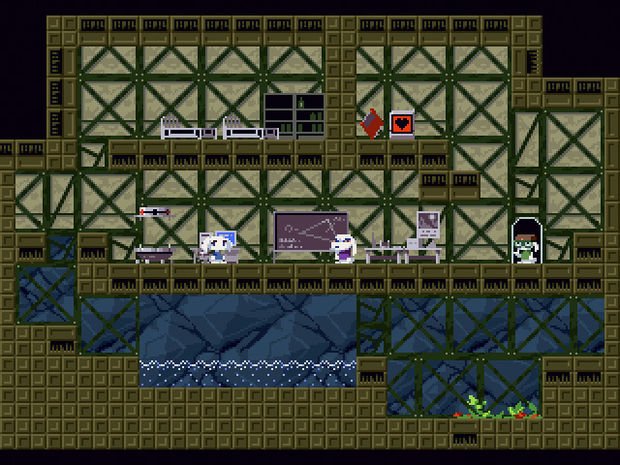 One of the main antagonists, Misery seems to have an issue with her hair in the PC versions. Sometimes it appears green and sometimes blue. Why is her hair originally green and blue? Which is it?

In Cave Story, there are several characters with dark green hair that appear. To be honest, I wanted to make their hair black, but it would have blended into the background too much. Because of my lack of skill I couldn’t omit any colors other than black, so from those problems their hair color was decided. The hair color of the Misery could be blue or green. Black hair will look like the color changed depending on the background it’s against.

Please tell us a little bit about the Miakido and other statues in a specific area.

Those are statues of the reigning Lords of Cave Story that the sculptor created.

What was your most favorite part for making the WiiWare version of Cave Story?

I really like that the music and art was remade. In the original game it was my preference to show the art and music poorly because it was an aspect that couldn’t be undertaken effectively due to limited time and manpower. For the Wii version, the music was recreated by a professional musician. Going back to the original Cave Story, by the time it was completed I had listened to the background music enough times to hate it, so it’s fun to play it with new music.

The new art was drawn with more details. At first, I was a little uneasy thinking that it was very important to maintain a consistent look, but I was relieved after it was complete, seeing the background and characters move. I was playing the PC version in 320×240 mode. I’m still not used to playing the game in 640×480.

Anyway, it’s wonderful that it came out on a game console that families can play. I had endless abandonment problems for choosing the PC as the platform. One of them being the vast of setups. As I mentioned earlier, depending on the environment, the functionality and control changes…

I made it so that it can be played on the keyboard, but as far as I know there are several things that are difficult to use on the PC game controller. Cave Story has the Nintendo Wii Remote (which I love) and Classic Controller to use on the and it functions the same no matter who plays. 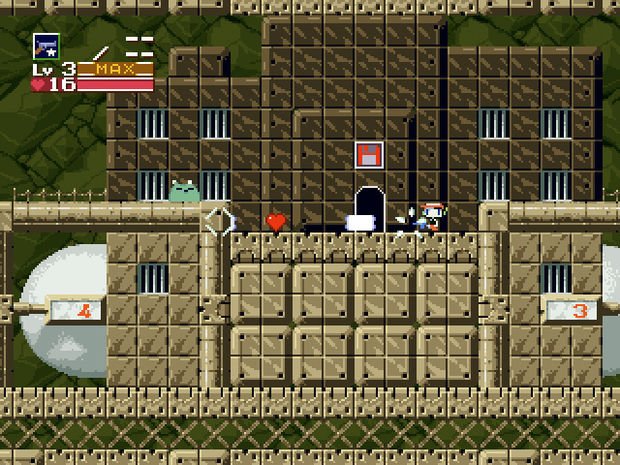 If you were to design Cave Story now, what would you do differently?

First of all, I would make a completely different main character. I don’t know about the rest. But, there might be a lot of pressure caused by comparisons with its predecessor.

What is the most popular question or request from fans?

That there be a sequel or continuation of some kind. It makes me happy to know people want it.

What will convince you to create Another Cave Story?

There is an order of priorities for me, that’s: Family > Myself > Work > Hobbies

Currently, being married and raising a family, there aren’t many resources I can put in to my hobbies, but with that little resource I am slowly making an RPG. Even that barely moves forward, so it may be impossible to create a Cave Story that surpasses its predecessor.

I’ve been told many times that the work in creating a game is difficult. Many individuals lose their spare time and end up having to work hard through late nights. If they are creating a game they like, then I am quite envious. However, it would be a problem for those with families that do not have time to spend with them.

How does it feel to be able to play your game on a game console?

Of course, it’s wonderful to have people play it on the Wii. For me, it’s like a dream come true. I think I will tell my family and friends. My wife is still half-believing and half not-believing.

And if you had been told it would someday come out on a console?

I’d have been happy, but wouldn’t have believed it. 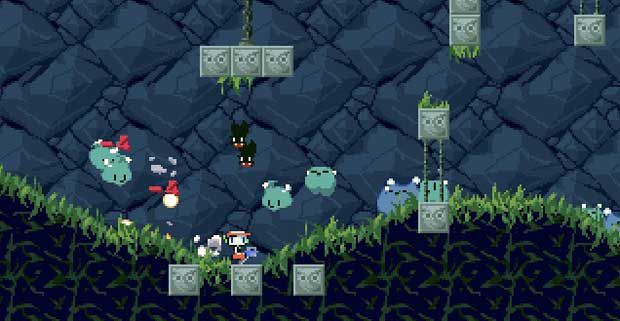 Do you have any suggestions for those people who want to learn how to program and design their own games?

I believe that ideas for a game design should not be polished until it’s actually running. What I do is play while creating, feel and think about what would make me like this game more. The problem with this method is that you can’t effectively create planning documents.

If you had an unlimited budget and a team that would work for you, what kind of game would you create?

I have a habit of thinking what can be done within the limitations, so nothing comes to mind if you give me an unlimited budget. I think it would be very appealing to create my own world on a network and have other players communicate to each other through that.

Do you think your lifestyle would change now?

I don’t know. But, I’m looking forward to my wife becoming more interested in my game creations.