I beat the final, North American retail version of Catherine yesterday. I know I’ve previewed the Japanese release, and then later previewed code from E3 earlier this year, but this is the final preview coming from me ahead of our official review next week. If you want deeper details on the game, go check out those earlier previews or wait on that review. Otherwise, here’s my wrap-up thoughts on this highly anticipated, not-an-RPG Atlus game.

Competition stats? I beat the game in just under twelve hours, but I think that’s because I’ve played it before. I knew all the stages, and had learned all the techniques from my previous play-throughs. I did that on Easy Mode. I tried the game for the first time on Normal Mode in Japan, and that was pre-patch. Hard Mode? Fuck that!

I’d guess that if you’re going on easy, you’ll spend another hour or two on the game’s dialogue, technique discussion and exploration. I’d say that this is a 15-hour game.

There’s a bit of replay value if you go back in under a more difficult mode, as the stages change a bit. There’s also the Babel and co-op play challenges to revisit. Otherwise, expect a dozen or more hours of tower climbing, drinking and cute blondes. 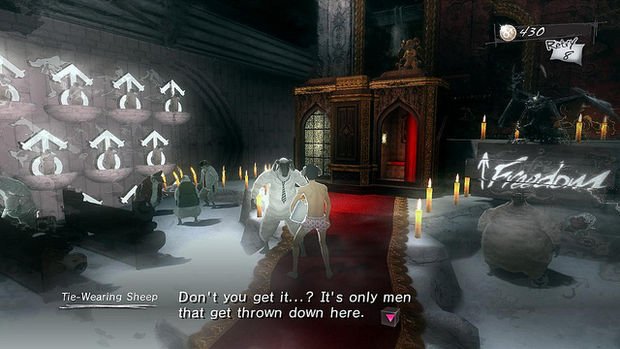 Difficulty? Not as much!

I bitched a bit about how difficult Catherine was after playing the Japanese release earlier this year. I take some of that back. As I predicted, Catherine is a much more enjoyable game with the difficultly pulled down a bit. The balance was not there before. Now Easy feels more easy. Normal is a bitch. I didn’t even try Hard — I’ll leave that to you.

I quickly noticed some changes in the North American version. The first is that there are more mid-level checkpoints in the game’s tower-climbing puzzles. Phew! That alone makes a huge difference. When you die, you come back to that checkpoint, saving you from the frustration of figuring out what the hell you did the last time to barely make it up to that point of the tower.

Between the post-patch effect and tweaks, you now have so many lives/tries that it’s almost ridiculous! I finished the game with more than 90 retries left! Of course, it was on Easy, and this is game where it’s easy to blow through 20 ‘lives’ on the harder stages while trying to figure out how to proceed. This is not a complaint. I am glad that there are plenty of retries now. You will be, too. 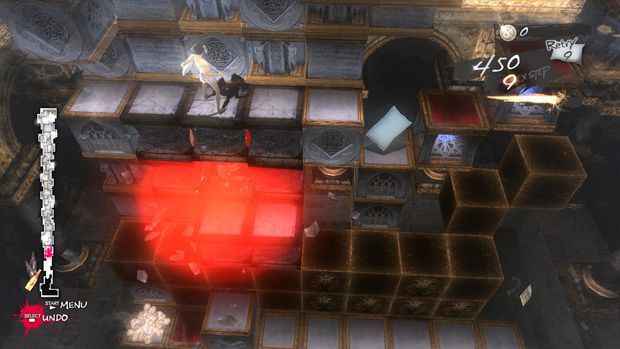 The levels are mostly the same. There may be a few areas where they’ve tweaked the puzzles in particularly trying areas, but they look to be mostly the same as they were my first time through. The changes in this version are more about how many retries you get and how many checkpoints there are. It’s much better this time around overall.

Localization is a win!

The English language script is outstanding. Great job, writers. There’s countless one-liners that had me rolling. Some of Vincent’s under-the-breath mutterings will go down in gaming history. His victory cheers are also hilarious. Beyond all of this, the care put into the script makes for some relatable, realistic characters. The game’s story was already a treat, but the work on this localization makes it a delight. 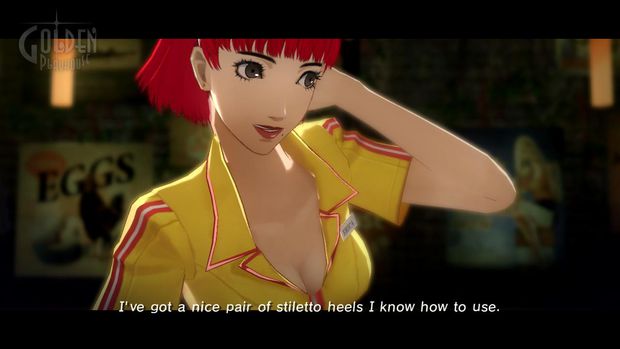 The only potential negative I see to this script is the heavy use of the word “fuck.” I think Atlus has broken the record for F-bomb usage in a videogame!

For me it’s not a negative at all. Vincent is often fucked in this game (dual meaning! Hello!), and he definitely lets you know it. Sometimes the use of the word is so funny that I’m glad they didn’t hold back. If there was ever a game to drop the F-bomb in, it’s this one. Fucking perfect.

Is this game sexy or not?

Jim Sterling asked me yesterday: “Is there boobs?!”

Well, all the girls in the games have boobs. 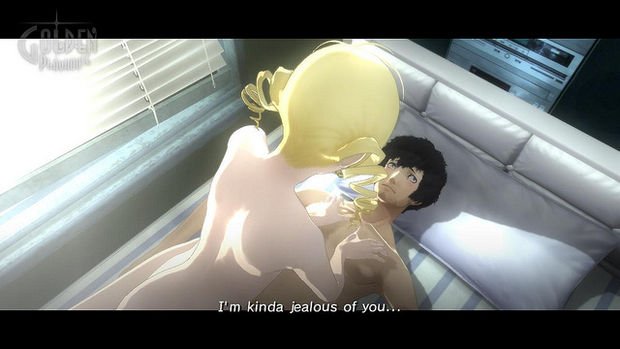 I think some things I’ve said before may have confused some of you. Catherine is definitely a sexy game. It’s not a sex game, but there is sex in it. There’s also sexy characters and sexy design. And wait until you see what pops up in your inbox in the game! Yes, Catherine is a sexy game. The point I was trying to get across last time is that Atlus Japan went at the advertising in the wrong way. Catherine is an action-puzzle title with a sexy story, and not a sex game.

This game is beautiful!

Confession: The first time I played Catherine was in my small Tokyo apartment. My television set was not even high definition. If I told you how small it was, you’d laugh. I won’t tell you how bad my TV was. I did this game an injustice by previewing it on that set.

Now I’m back home in America for a bit, back in the land of excess. My gaming rig is either a 55″ Sony LCD or a 109″ HD projector. I played Catherine on the latter and my jaw dropped. 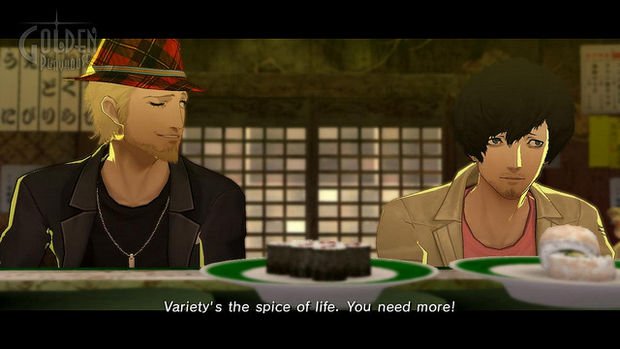 Catherine is a beautiful game! Now I see. Atlus have made it clear that this title was a sort of test for what they could do on HD consoles. Whatever engine they have running this bad boy needs to be used in future titles. The real-time cutscenes are so good that I don’t even think they need to bother calling Studio 4°C the next time around. (Sorry, Studio 4°C)  The animation, mo-cap, shading and details in HD were so lovely that I feel spoiled. I’m already imagining the next Shin Megami Tensei title with this engine.

Not really. I got those out with the first preview. I would even take back some of the old ones, like the one on the difficulty. There’s a few left, though.

I still really, really, really hate the decision to have the screen shake so much during the boss battles, as I first mentioned here. I still maintain that it’s a major fault in a action-puzzle game where precision and speed is key. They should have fixed that. Luckily it doesn’t happen very often.

I still have beef with how the camera sometimes sort of auto-pans during puzzles. Sometimes you can lose track of where you’re going. That’s not as serious of an issue, though.

If there is a new one, I don’t love the transition between anime cutscene and the real-time cutscenes. As I said before, the real-time stuff looks really great. They should have just had Studio 4°C do the intro and ending. 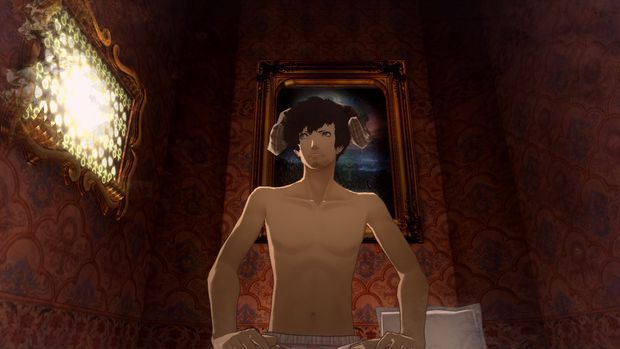 Oh yes. Unless you hate story-based games or action puzzlers, you must get down with Catherine. Again, there’s no way to put a name on what kind of game this is. I still maintain that it’s unlike anything you’ve ever played, so don’t try categorizing it.

That demo? I feel like that demo is just a small window into a big, beautiful world that you’d be missing if you simply wrote this off as a puzzle game.

Atlus tried something new with Catherine and it definitely paid off. No, there’s no dungeon crawling or level grinding or demons…well, scratch that last one as there’s some demon-y things. But Atlus went a different route here with gameplay and story, but you’ll still find that their ability to pull you into a great story has never been stronger. Sure, it’s not an RPG, but Catherine definitely still has that Atlus charm.

Catherine hits the PS3 and Xbox 360 on July 26 in North America. Look for our review next week.