Is Konami starting to make a comeback? It’s too hard to tell, right? They seem to be supporting Bomberman R quite well, Zone of the Enders Mars is a success, and they’re making an effort to bring Castlevania into the fold in multiple ways. Castlevania: Requiem, a collective of Rondo of Blood and Symphony of the Night on PS4, is one such revival.

Having spent roughly two decades with these games I know them inside and out. Depending on what you’re looking for, that might be a good thing if you’re thinking of grabbing Requiem. 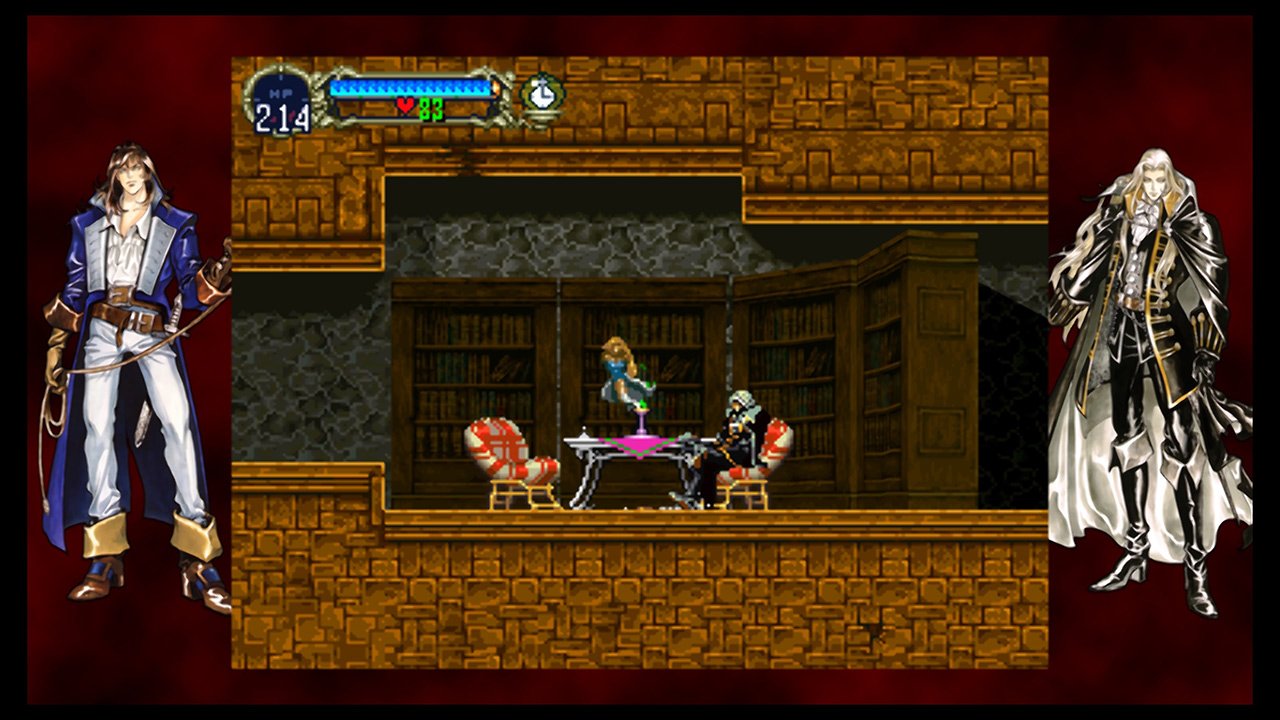 So the elephant in the room is the main change: the dialogue and voices are from the PSP version, not the originals. That means less cheesy but equally uninspired voicework, as well as changes to iconic lines like Dracula’s “what is a man?” speech. In the case of Symphony of the Night, if you’re the type of person who cares whether or not a 10-ish hour game has a five-second meme in it or not, you’re going to be pissed. For the rest of us, there’s a great set of games to enjoy here, even if not much has changed.

Rondo of Blood, which conveniently functions as a precursor to Symphony of the Night (complete with several of the same enemy designs) is more of a linear, classic Castlevania experience. It’s roughly an hour long and will take you through Dracula’s Castle and its denizens, capping off stages with challenging boss fights. If you haven’t played Rondo of Blood before it’s definitely going to take patience, or know-how of similar retro games from the era, to get into. It throws tons of enemies at you pretty much at all times, with several tricky platforming sections to boot. It’s dated and the Requiem release doesn’t significantly upgrade it in any way, but it remains one of the more memorable old-style Castlevanias to date. I specifically have a soft spot for its cheesy cutscenes and sometimes maddening bosses.

You’re probably not here for Rondo of Blood though, are you? Symphony of the Night didn’t invent the subgenre but it significantly meshed existing concepts together to cement the “Metroidvania” formula: it did it to such aplomb that I’ve played it annually every year since 1997. Given that it was originally a PlayStation release, it only makes sense that it would come home. And…it’s back, in PS4 form, using the Dracula X Chronicles shell. As far as I’m concerned that’s a good thing.

This is still Symphony of the Night as you know it. Sure the voices aren’t the same but the tight controls, customization system, and sequence-breaking action are still translated perfectly. The ability to level-up for your efforts is such a monumentally good change, as are the RPG systems that let you feel like you’re earning something over time. Alucard’s otherworldly nature also lends itself well to the idea that you never really know which power you’re going to get next.

Pretty much everything in Symphony comes together to form one of the most perfect platformers to date. Moreso than Rondo, Symphony benefits from the visual touch-ups and a smoothing filter, especially when it’s stretched with the full-screen option. Text is clear (which matters when swapping gear and eyeing stats), as are on-screen item pickups, which were sometimes difficult to discern in the original PlayStation version or the PSP port.

As far as the touch-ups go for Requiem as a whole they’re very few and far between. You can customize the controls in Rondo of Blood from the Requiem menu (Symphony already allows this in-game), quick save in either game (which boots you out until you return to the file), there’s some cute DualShock 4 speaker sounds, you can alter the display size from “normal” to fullscreen, opt for scanlines or seizure-inducing interlacing, swap to Japanese or English audio, and turn on slight graphical smoothing. It is possible to change between either game without quitting out of Requiem entirely.

While the PS4 release is convenient, it’s somewhat of a missed opportunity to innovate in the way that many other developers are doing with re-releases. An L3 or R3 button for additional item slots in Symphony of the Night would have gone a long way, as would a fun photo mode with a few filters. Anything, really.

Castlevania: Requiem is a complicated thing. It’s both a wonderful package of two incredible moments in Castlevania history and a bog-standard port. Nothing has been significantly upgraded from the already existing PSP dual-pack, so if you already own these in some form or another, stick with those. Just keep in mind that at $10 each (Requiem is $20) it’s currently one of the cheapest ways to get them. That ain’t bad!