Not a horrible night to play these games

Castlevania went through a pretty rough patch after 2008’s Order of Ecclesia.

While the original Lords of Shadow was a fine God of War-like romp, it was far removed from what made the series famous in the first place, and the sequel flub kind of put a kibosh on the whole idea of a 3D Castlevania. Mirror of Fate sort of course corrected (and served as a prelude for the better Metroid: Samus Returns from the same developer), but by then the damage had been done: Castlevania has been dormant for nearly five years now.

But Konami will never, ever pass up the chance to resurrect the classics. 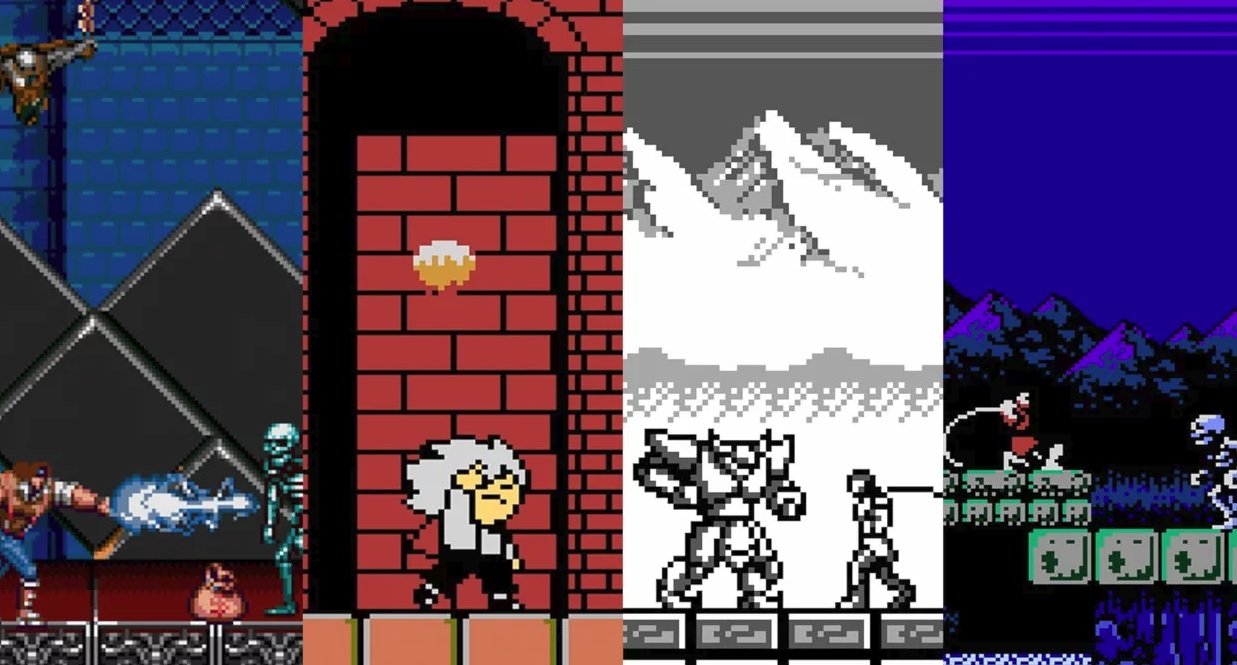 Before I continue, here’s the rundown:

Each and every game deserves to be there for different reasons but come together as one cohesive symphony of storytelling. The classic feel that was born out of the original is present throughout the collection, despite the more free-roaming aspects of Simon’s Quest and Dracula’s Curse. It’s a true trip down memory lane and the avenues you might not remember so well.

The first four games, straight up, are all great platformers that still hold strong. There’s a reason they all get speedruns yearly at various events, and they’ve been talked about at length, so I won’t bore you here. The two included Game Boy iterations, on the other hand, are a bit more complicated. They don’t really stand out anymore (even in this compilation) and the blown-up visuals and slowdown don’t do any favors for games that were from a Game Boy source. Still, they’re a frequently forgotten part of Castlevania‘s history and should be remembered. Plus, Belmont’s Revenge wins out with a more compelling stage-select option from the get-go, a flashier soundtrack, and more detailed game worlds.

Bloodlines is so extremely Sega Genesis you’ll be able to hear it immediately after booting it up and mucking about for a few moments. It’s another game that’s not always in the Castlevania conversation – especially for SNES kids – but it should be. It has more of an immediate beat-’em-up feel with flashier power-ups and some impressive animations, with bulkier enemy models, as well as a globe-trotting concept and a continuation of the multi-character option from Castlevania III. Now is the time to play this one if you missed out. Bloodlines differentiates itself while still keeping to the core of Castlevania. I’m proud of my physical copy.

And then there’s Maude Kid Dracula. Mmm mmm Swedish Chef kissy fingers, this subseries is great. As sort of a parody of the original franchise, you’ll take a super deformed version of Dracula’s son on a goofy romp through a lot of the same types of Castlevania levels, but with adorable chibi editions of enemies stomping around. Kid boasts a four-way Mega Man-style charge shot, and the Rockman comparisons don’t end there as he’ll acquire abilities from bosses. This one is extra special as it’s the NES (Famicom) edition and not the Game Boy version (which was actually a sequel/re-imagining), which was never released in the west. It’s a perfect chaser after you finish the original game, especially when you can spot all of the homages and sit back and enjoy the wacky casino games.

All eight offerings have six display settings (well, three, as half are scanline variants: original, pixel perfect, 16:9, 4:3 scanlines, pixel perfect scanlines, and 16:9 scanlines), and the Game Boy games have dot matrix and (limited) color filters. A quick save state slot is a go, as is an instant (and I mean instant) back to the main menu/game selection when it’s time for a change. No controller remaps is a bummer, especially if you don’t own a solution you like (a Pro controller is ace here, I had no real complaints).

But the best part is probably the roughly 80-page “bonus book” extra, also accessible from the main menu. It’s littered with old-school tips, brief historical overviews of each game, and a rundown of the controls in case you haven’t played any of them before (the Genesis-style Bloodlines controls add an extra button to the mix). There’s interviews, a timeline of included games, a run-through of the Belmonts involved, character/location concept art. Dare say it has…actual effort put into it? The future of Castlevania looks bright if this is what we’re getting from a collection of re-releases. Japanese editions for select games are getting patched in “shortly after launch,” too.

Castlevania Anniversary Collection always looked on-point when the full game list was announced, but I’m surprised at how great the extras are and how functional it is. More of this please, Konami.

[This assessment is based on a retail build of the Switch version provided by the publisher.]