CastleStorm is definitely not a game that’s easy to draw a frame of reference for. One part Jenga, and one part tower defense, this mash up certainly draws from opposite genres to get its own formula going.

Once it’s off though, its may surprise with just how tasking, and fun, it can be. 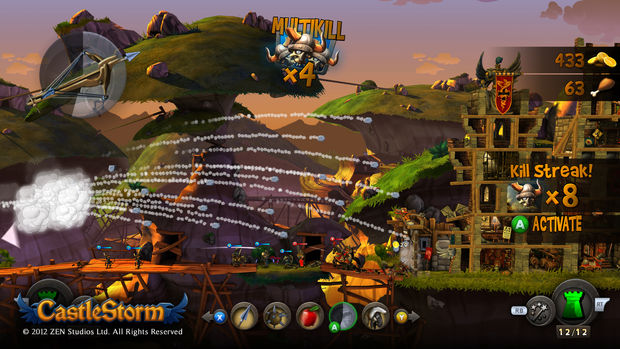 CastleStorm is an oddity that’s not the easiest to explain. Each match is a battle with the same objective: destroy the other team’s castle. The main method of destroying a castle is to hurl projectiles at it until the superstructure collapses. The projectiles themselves come in a variety of forms, including a single standard, one that breaks off into smaller pieces, a few bomb variants — stop me if this is sounding familiar. While it is certainly Angry Birds inspired, CastleStorm is hardly a retread. Depending on the map you’re playing, there are a variety of secondary objectives that can really put the screws to you, testing your ability to multitask.

During my playthrough, my secondary objectives were to guard a convoy of peasants running from enemy forces, and capturing a center, neutral flag. It’s here that CastleStorm shows its strategic sensibilities. Operating on a traditional resource system, you can spawn troops for a cost to fight battles. Since fights are on a 2D plane, there is little in the way of micromanaging units, resource gathering, and the like. 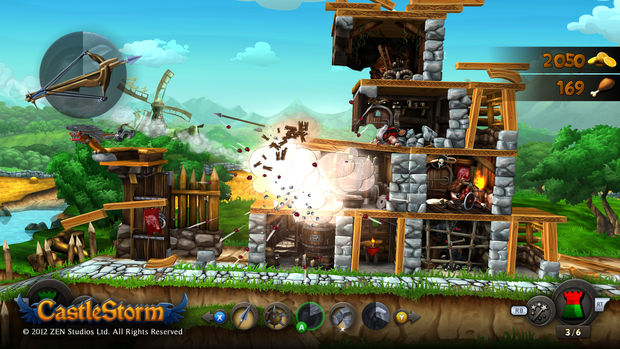 Running the fantasy gamut of mage, archers and warriors, your troops are AI controlled, though you can use your projectiles meant for the enemy castle on enemy units, if you absolutely crave direct intervention. There is also no real resource gathering, as they will simply regenerate over time.

So without a direct element of control in the minute of battle, CastleStorm seems simple enough right? Wrong. While no one given objective was in itself a challenge, it’s when I had three — even on normal difficulty — that the real juggling act starts. Hurl a couple of bombs at the enemy castle, now spawn warriors to cap the flag, set the archers to take out enemy infantry, get mages on the field to assist the peasants; oops now I’m dead because the enemy took out my castle. It really takes a minute to settle into a good rhythm for each map.

There’s a good amount of planning that takes place outside of battle, mostly in the form of the castle editor. From here, you can create your own fortress, complete with barracks to spawn extra troops, labs for resources, and so one. Custom castles can be used online too.

While I didn’t get to see it in my demo, you can expect CastleStorm to ship with co-op, survival, and adversarial modes when it’s released next month. Certainly an interesting approach to tower defense, and one worth watching out for.