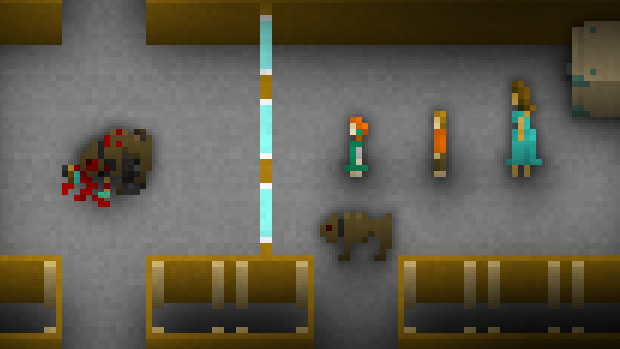 Jason Rohrer’s new massively multiplayer game, The Castle Doctrine, releases next week. To celebrate the end of the game’s alpha test and looming launch, players who have bought the game ahead of release are eligible to compete in the “Steal Real Money” contest. Rohrer will be giving away up to $3000 in cash, divided among the game’s players based on their success in the coming week, along with real versions of collectible in-game paintings, door jamb reinforcement kits, and gift certificates to a Los Cruces, New Mexico gun shop.

The contest’s grand prize is a telescoping metal baton, referred to as a “dog club,” which Rohrer purchased for his wife following a dog attack which helped inspire the game. Certainly one of the more interesting awards we’ve seen, this is an honest-to-god weapon actually illegal to own in three states (including California, where Rohrer has since moved, leaving the club behind) and the District of Columbia.

I’m playing in the contest, simply by virtue of my playing The Castle Doctrine, but perhaps “playing” is too strong a word to describe what I’ve been doing. First, I load the game. Then I spend about an hour staring at my house, overwhelmed by the terror of knowing that someone will to come and take all the precious things, before finally placing a maze of walls and corridors. Then, I leave my house, enter another player’s house, and die pretty much instantly (rendering all my time in my own house utterly pointless). Then, I start again. Something tells me I’m at little risk of winning a prize.