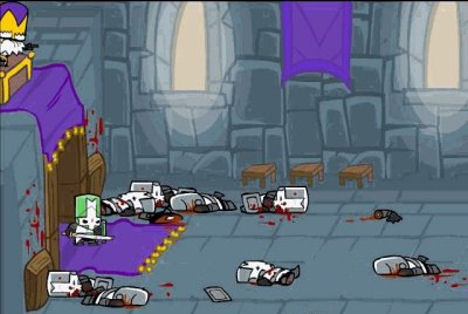 The Behemoth has been talking DLC for its highly popular XBLA game, Castle Crashers, explaining why there is no chainsaw in the game as expected, and promising that at least two new characters will become playable in the future:

Moving forward we can tell you that yes there will be a playable King and Necromancer. Yes, there is a chainsaw weapon, and no, they are not currently in the game.

As soon as we get more information from our friends over at Microsoft we’ll share that with you.

According to The Behemoth, this content was expected to be in the game thanks to various developers and media outlets being able to view Castle Crashers on Microsoft’s internal network when it was being tested. Not knowing that what they were viewing was proposed DLC, they expected it to be in the game. Our own Reverend Anthony was quite upset at not being able to play as The King, while I was really hoping for some Necromancer action, so it looks like we’ll both be getting what we want, with a chainsaw bonus to boot.

While the idea of playing as The Necromancer makes me happy, I do dislike the idea that this stuff existed long before launch and was being held back just to hawk it to us at a later date. That’s one of the few things I despise about DLC lately. I don’t know if I’d pay extra cash just for some new characters and a weapon, either. However, if The Behemoth wants to talk about extra campaigns and levels, then I am all ears.