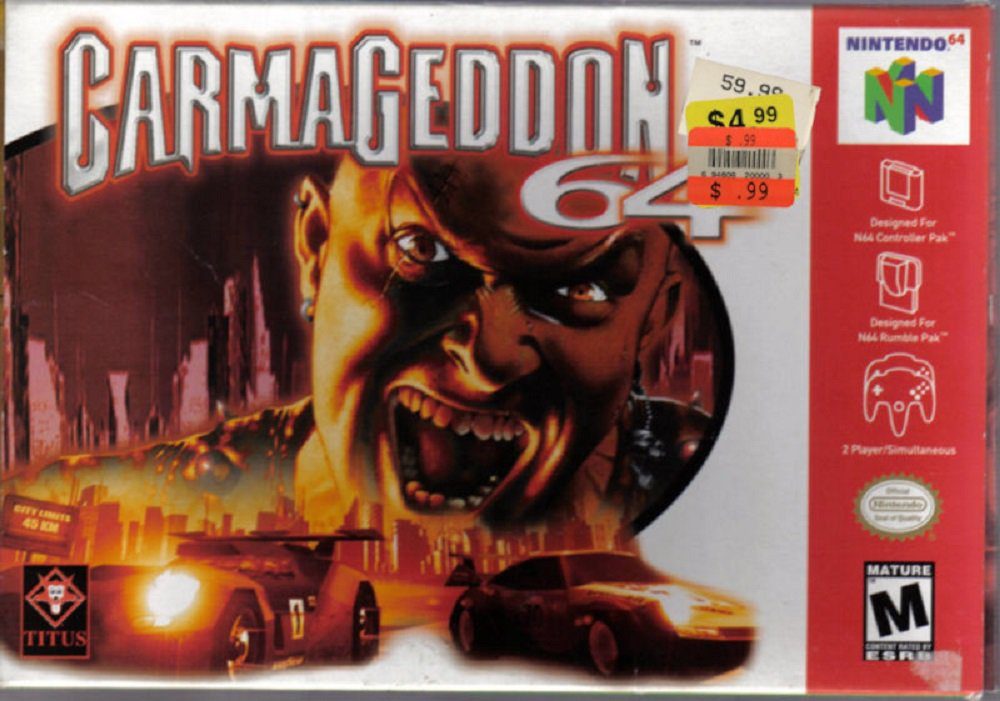 It is difficult to express how much this kusoge revolts me

I’m something of an apologist for Superman on the N64. No, I’m not about to claim it was good — it definitely wasn’t. It was an abysmal void of despair where a game should be. However, I often argue that it’s not the worst game ever like some people claim. It wasn’t even the worst game on the N64. It wasn’t even the worst game developed on the N64 by Titus. No, Titus had a special talent for pumping garbage water from the bottom of the well. I have a mantra about Titus: “It ain’t no fun if there’s a fox on the box.”

The publisher was responsible for bringing us such questionable N64 titles as Xena: Warrior Princess: The Talisman of Fate, Hercules: The Legendary Journeys, and Carmageddon 64. But whereas Xena and Hercules are, uh, playable, to put it charitably, Carmageddon 64 is the deepest pits. It’s like getting your shoelace stuck in the world’s slowest escalator; it may sound like an easy thing to avoid, but if you try to ride it out, you’re in for a very slow, painful, and embarrassing death. 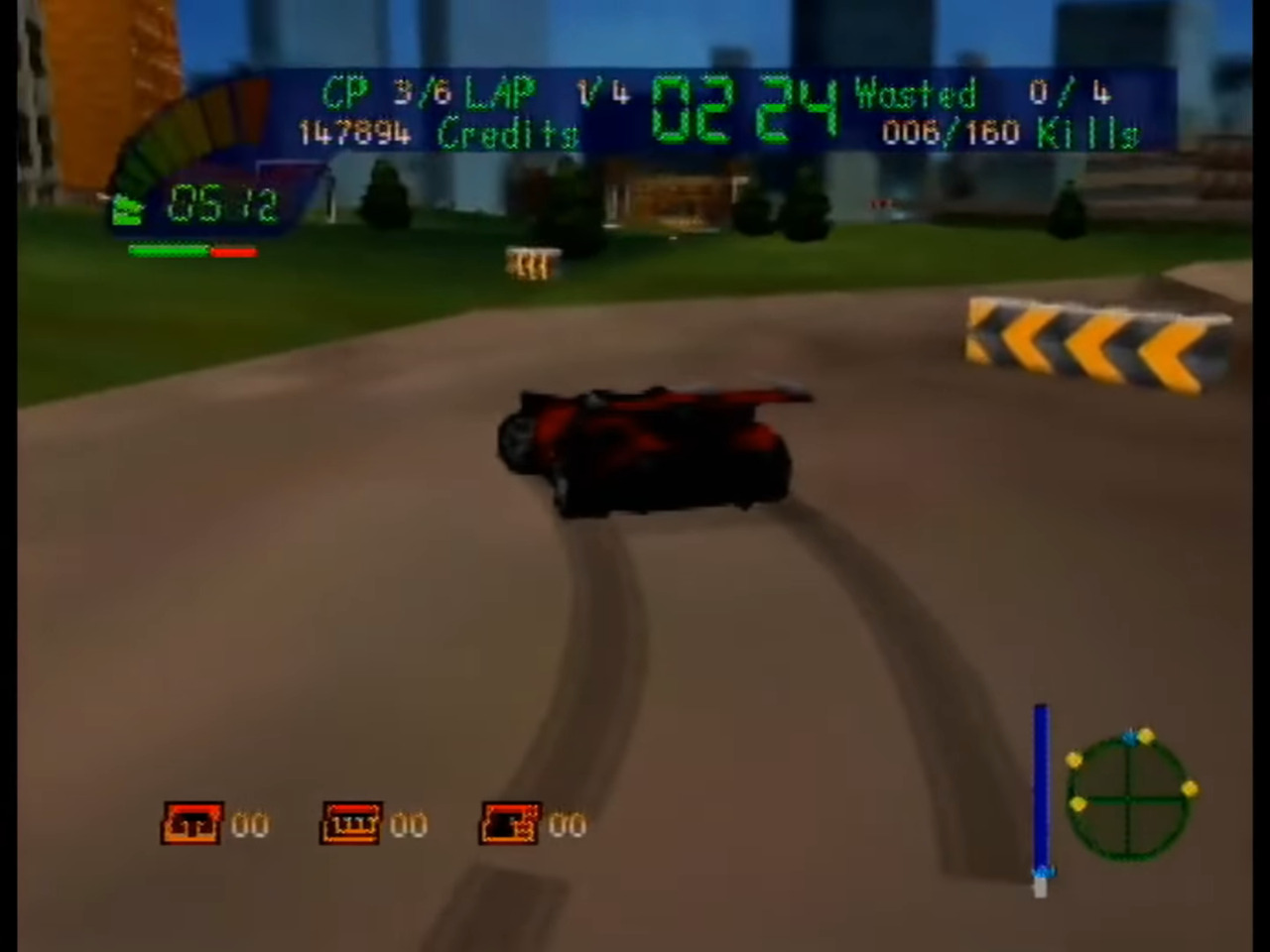 At its rotten core, Carmageddon 64 is an N64 port of Carmageddon 2: Carpocalypse Now, a PC game that wasn’t really all that great in the first place. The Carmageddon series was somewhat notorious for one simple reason: it encouraged you to run over pedestrians. Morbid, perhaps, but something that appealed to a certain audience, especially back in the ‘90s when absurd violence was en vogue for video games.

To be fair to Titus, they only published the game in North America. The port itself was mishandled by the creatively named Software Creations.

There are some stark differences between the N64 version and the PC original. Most drastically is the replacement of pedestrians for zombies. It was implied that this was done at Nintendo’s behest, but I have the sneaking suspicion that they just didn’t want to program the pedestrians to walk on the sidewalk, so instead, they just mill about in groups. The German version had the zombies replaced with dinosaurs, and I’m embarrassed to say that I wish I played that one instead. 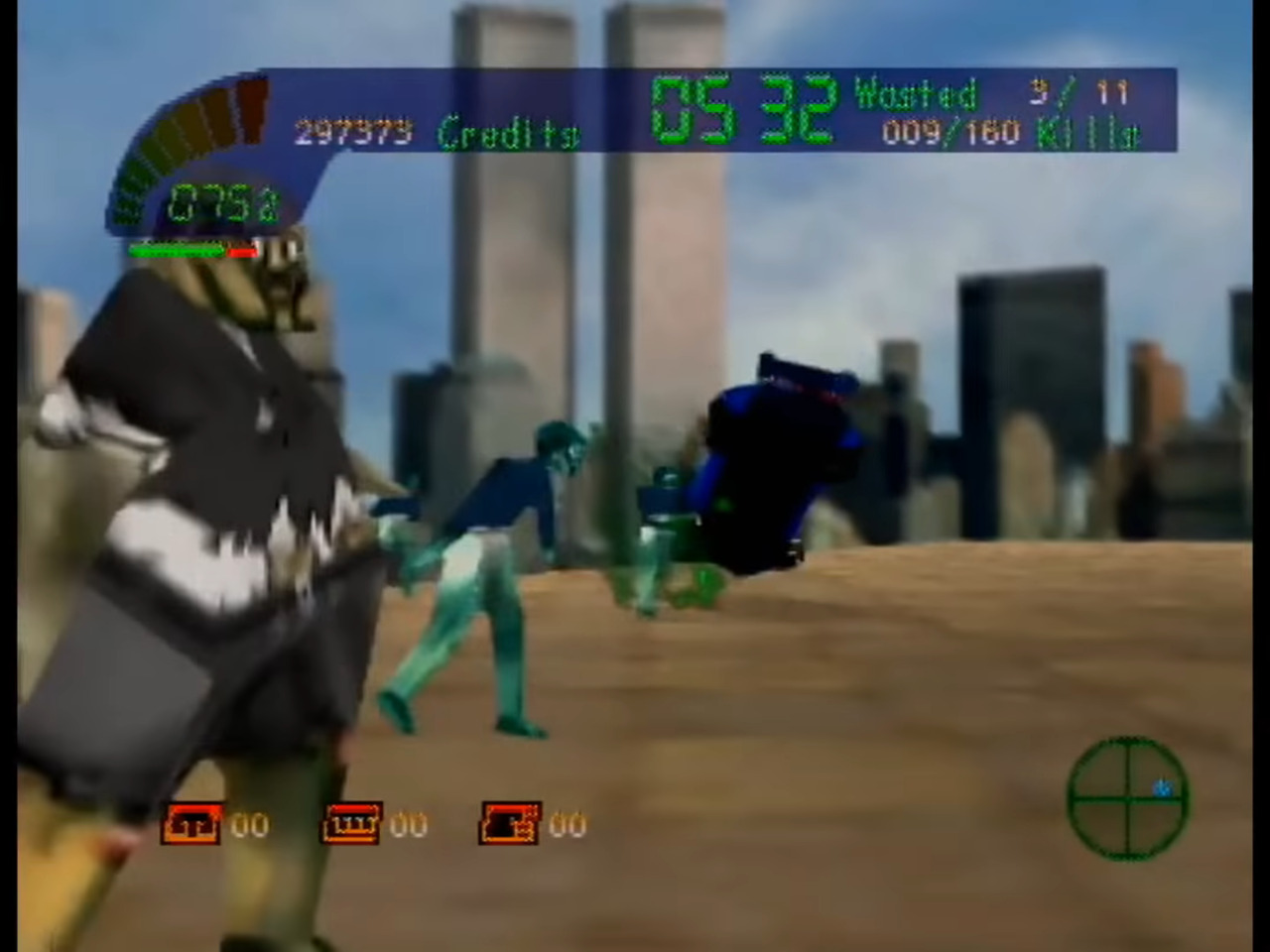 If you’re not familiar with the series, Carmageddon is a driving game with three ways to win: clear all the checkpoints within the time limit, wreck the other drivers, or kill all the zombies on the map. Make that two ways to win because there are sometimes hundreds of zombies on the course at one time, and the only way I see someone accomplishing that goal is if they’re sadistic in the most boring way imaginable.

That may make it sound like that leaves a race where you automatically win if you take out your opponents. A reasonable assumption, but an inaccurate one. No, I’m not sure what the other drivers are doing here, but they are not part of your race. Your options are exactly as I stated: complete the circuit or kill everyone else. Your only competitor is the time limit.

You’re likely going to lean to the latter for two reasons. First, the tracks aren’t very well designed, which is a problem that sort of gets carried over from Carmageddon 2. They’re all cut out of a much larger, open area, which is kind of cool for such an early game but is pointless when you’re reduced to easing yourself around turns and over hills to prevent your car from wigging out.

The second reason is that later levels force you to complete a full eight laps around the course. It’s easier to just shift your car into reverse and slam into whoever is behind you in the starting grid. The AI is dumber than a robot vacuum cleaner and has the self-preservation skills of an earthworm. I’m not sure what they do when they’re off-screen, but they always seem to gravitate toward your grill at some point. 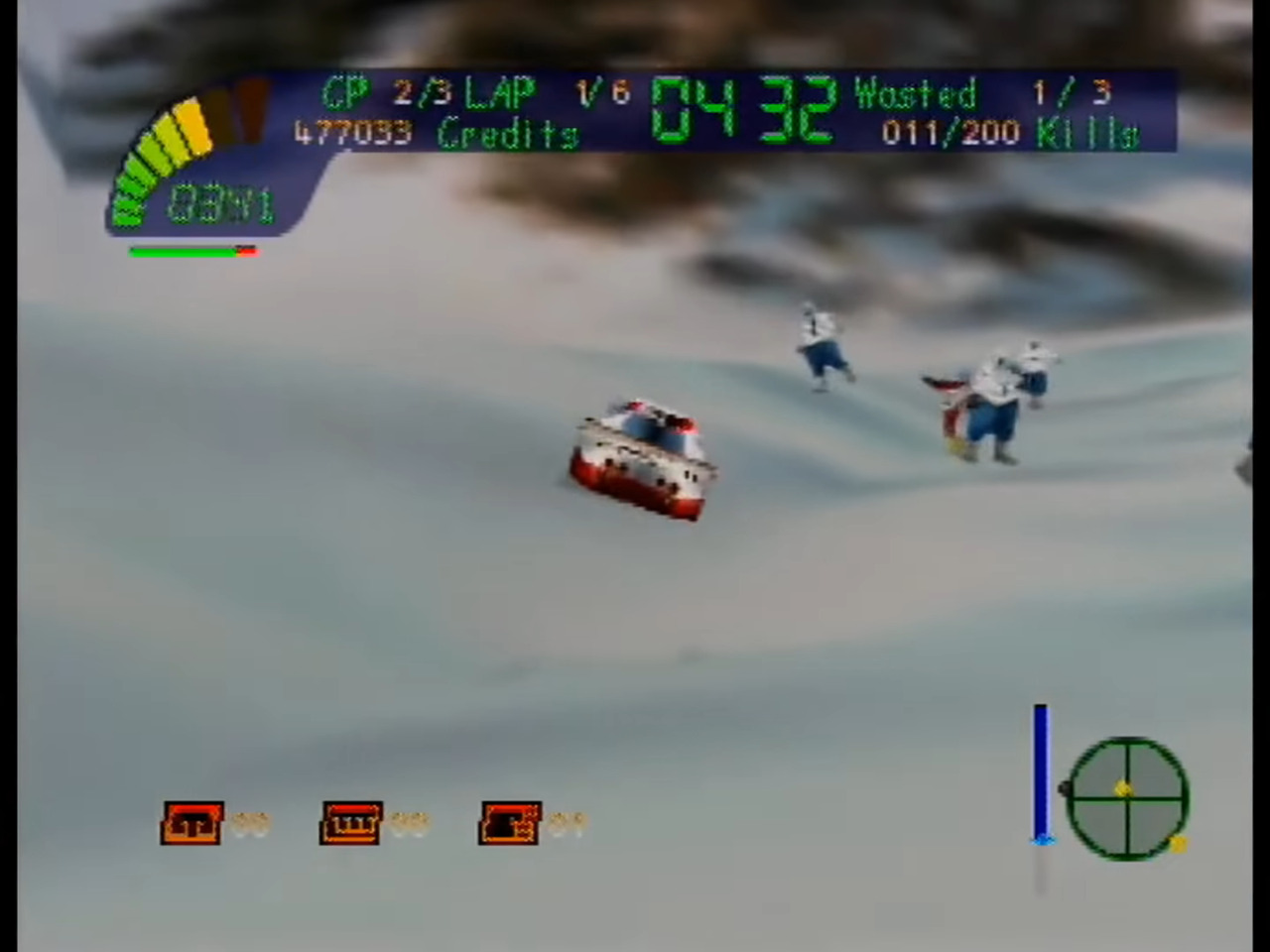 So, that reduces the game to a demolition derby at the starting grid, and it’s not even good at presenting that. Carmageddon 2, to its credit, had a pretty cool damage system for its time. Individual parts could break and cause your car to handle differently, and cars deform and fall apart as they’re hit. Carmageddon 64 has none of that. You’re driving a brick and a meter depletes every time you hit something, and when it’s empty, you explode.

Before you hit that point, you can just repair yourself, which in the N64 version can be done instantaneously by double-pressing the R button. As long as you have the cash, that is, and really, making money is so embarrassingly easy here that I’m surprised I didn’t max out the counter by the time the credits rolled. This makes combat completely brainless and the few bosses that get thrown your way laughably ineffective because you’re always just a couple button presses away from full health.

The only real challenge I found with the game was the missions that cap off every group of levels. They range from “kill all the zombies because you have no other choice” to “intentionally drive over all the mines in the map.” Grappling with Carmageddon 64’s physics to make tricky jumps across obstacles is its own circle of hell. The worst requires you to land a jump on the top floor of a building, and I was tearing my hair out until I found that a power-up allows you to jump on command and jump in mid-air. 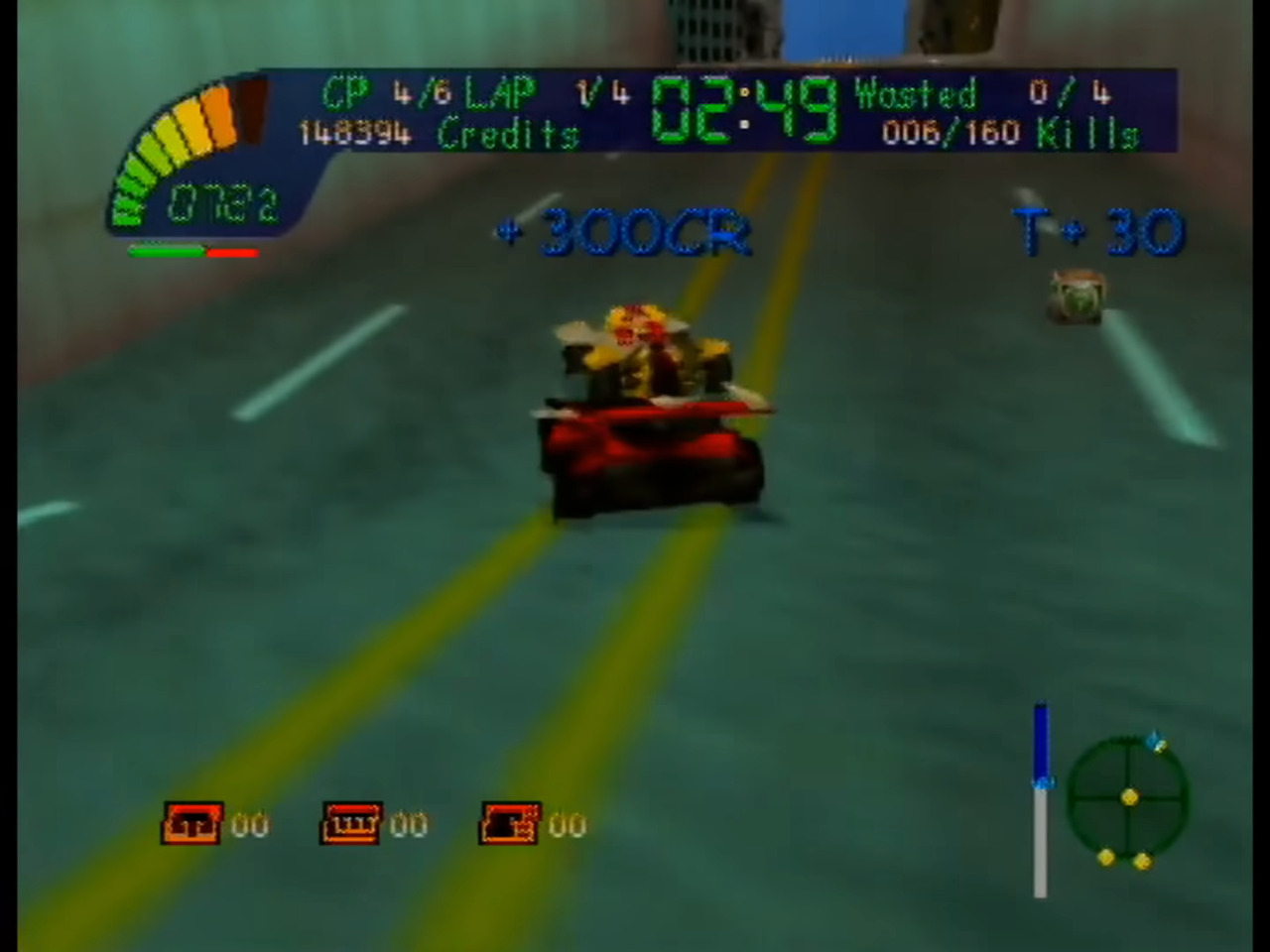 You can buy your opponents’ cars after you wreck them, keeping up to six in your garage. To be fair to the game, they all handle and accelerate differently, but if there’s a way to view the stats or even the strengths and weaknesses of each car, I never figured out how to do it. I was overjoyed when I was able to unlock the ice cream truck, but then shattered when I realized the hit detection on its roof ornament extended so high above the truck that it made entering certain tunnels and underpasses impassible.

I’ll admit that it’s technically impressive that the developers were able to duplicate Carmageddon 2’s large-ish worlds on the N64, and they were also able to do so while providing a rather impressive draw distance. However, they probably shouldn’t have because the game slows to a crawl pretty frequently.

I’ve played enough N64 that I consider myself practically immune to the eccentric performance of many of its games, but I haven’t been so inoculated that I don’t notice how bad Carmageddon 64’s is. Some maps just chug in general, but there’s a section of highways on the city map where the game just turns into a slideshow. 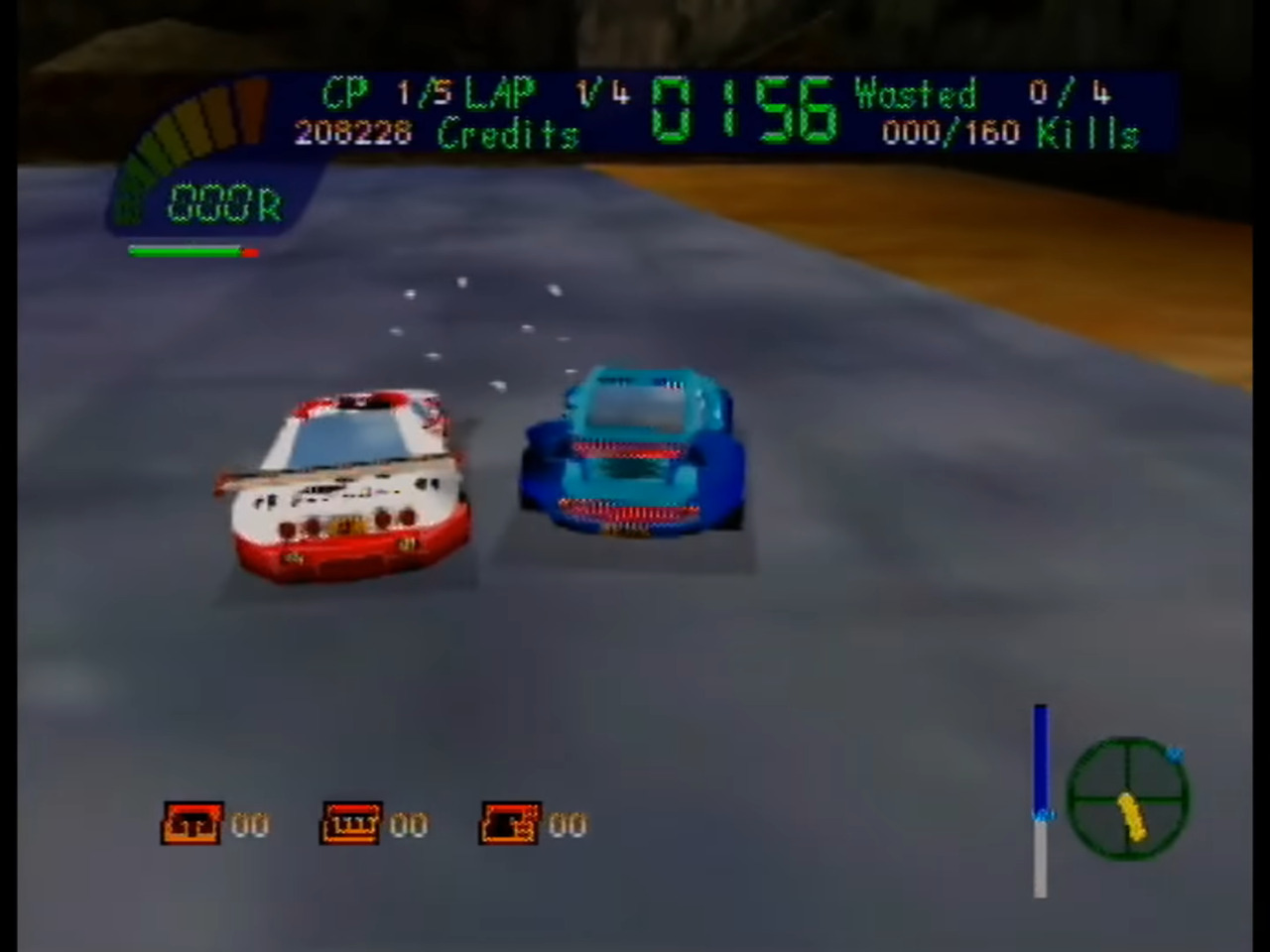 If there’s one redeeming quality among Carmageddon 64’s many deficiencies, it’s absolutely nothing. There is nothing good about this game. It’s terrible from a design standpoint, it’s awful from a technical perspective, and even the music sucks. Say what you want about Iron Maiden, but it was probably exciting for some people that they contributed to the soundtrack from Carmageddon 2. Carmageddon 64 replaces it with some awful, generic techno, and I honestly couldn’t claim to have a guess at how many music tracks are in this thing because it all sounds the same.

If I’m being extremely charitable, I’ll say that the game can at least be completed. It didn’t crash on me. So, that’s something. I feel I’m just damning with praise at this point, which is perhaps fitting. I have led expeditions through many dark crevices in the N64’s library, but this is the deepest one I’ve found. Also, it’s full of garbage and disease.