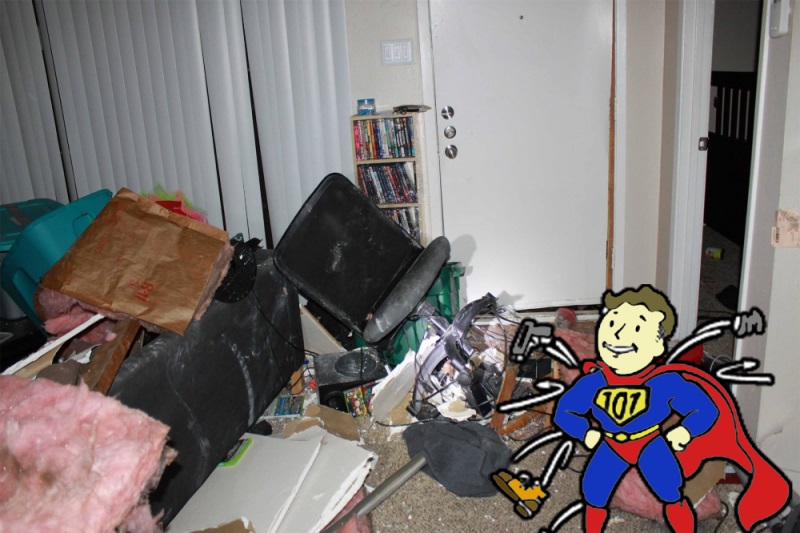 His response is priceless!

Ben Rose was playing Fallout 4, minding his own business, when a Hyundai Sonata burst through his wall like a violent Kool-Aid Man before plowing directly into him. Fortunately for Ben and the driver, the words “Wasted!” didn’t pop over his body. Ben survived.

When speaking about the accident, Rose delivered the following dare I say epic quote: “You play in a wasteland and then your apartment turns into a wasteland. Cars versus people don’t really end up well.”

It’s lucky for Ben that he was sitting in a chair with wheels, as he believes that alone saved his life. “The chair is what saved me, without a doubt,” he said. “That took the impact. It pushed me out of the way. It kept me from going under the car.”

Just goes to show that we aren’t safe from cars no matter where we are and that scene from Day Watch could come true.

Police believe the driver mistook the accelerator for the brake pedal, as she was attempting to pull out of a nearby parking space. The driver didn’t have insurance, so Rose is stuck paying the bills.

Not only does he have a deductible on his renter’s insurance to pay, but medical bills for a fractured vertebra and a mostly-severed Achilles tendon. Ouch. Thus a fundraiser has been started by some of his friends to help relieve the burden. At time of writing, Rose has raised just short of half his goal of $10,000.