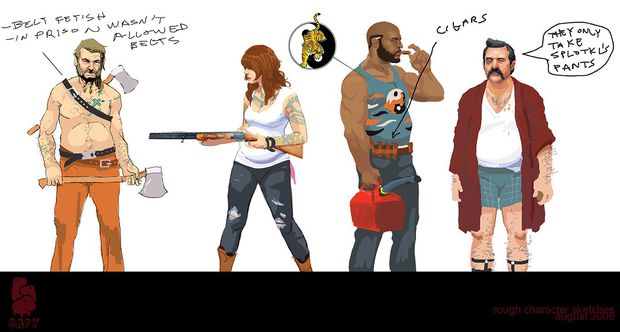 Earlier today, GamerBytes found a document from the Ontario Media Development Corporation that detailed a title from Capybara Games (the folks who brought you Critter Crunch on PlayStation Network and iPhone) called Zombie Tactics.

Although a few months old, the document was revealing, detailing Zombie Tactics as “a mixture of strategy gameplay elements into the horror genre, dropping players into the heart of a devastating zombie apocalypse with nothing but their wits to get them out alive.” Players start off alone, eventually finding survivors which they’ll add to their team, as well as weapons and other supplies.

Curious, we went directly to the source and asked Capybara — what’s the deal with Zombie Tactics?

“Zombie Tactics is the working title for a game Capy has been toying with for awhile,” Capybara’s Nathan Vella told us, “such a long while that our initial concept art was done in pixels.”

The game itself is in the early prototyping stage, although they do have a small team working on the concept to see if it “has legs or not.” For more details on the game, what platform it could end up on, and whether the game will look and feel more Critter Crunch than Left 4 Dead, hit the jump.

“Really, you know as much as we do,” Vella says in all sincerity when asked for more details on Zombie Tactics.

“We know the goal for the project — a tactics-heavy strategy-meets-survival game,” he explains, “but we’re actually smack dab in the midst of prototyping the gameplay. There’s a lot of ways this can go, and we’re aiming to find the best one with our prototype.”

As far as how all of that will play out, expect Capybara to explore something different than what we’ve already seen in other undead-themed titles. Vella says they’re “definitely pursuing the straight up strategy approach,” conceding that there are enough good third- and first-person titles on the market.

Zombies have had a long history with games, appearing in everything from Zombies Ate My Neighbors to Left 4 Dead. However, the style and tone of how zombies are handled varies drastically. Capybara plan on bringing their own unique take to Zombie Tactics.

“‘Capy’ and ‘overly serious’ does not vibe well together,” Vella says. “That being said, we’re not going to make a cute game with zombies, either.”

Right now, he says, they’re working on the game’s art direction, its mood, and atmosphere. Zombie Tactics will “feel like” a Capybara game — there will be the trademark humor — with “blood, gore, and ideally, a dash of horror as well.”

On the subject of what platform we might see Zombie Tactics on, Vella says it’s too early too tell, even admitting that “it might not end up anywhere, to be honest.” Being a prototype, it’s possible the game will never get off the ground. He points to the “keen detective skills of Internet-savvy journalists” catching them with their pants down being the only reason it’s talking about the game at all.

He says that the studio as a whole are fans of PSN, Xbox LIVE Arcade, WiiWare, iPhone and DS, and feels their concepts could end up anywhere, really. Ideally, Capybara hopes that Zombie Tactics will be a downloadable title… if it even comes to fruition at all.

“It’s super important to note that, as it stands right now,” he drives home, “the game is so super-early in prototyping phase, so Capy isn’t sure where, when, or even if this will have a platform.”

Capybara’s most recent game, Critter Crunch, is available now on PlayStation Network and features zero zombies but plenty of cuddly-looking creatures. That doesn’t mean it’s not a good game; we kind of liked it.

[All images and artwork are from early prototype work on Zombie Tactics, courtesy of Capybara.]