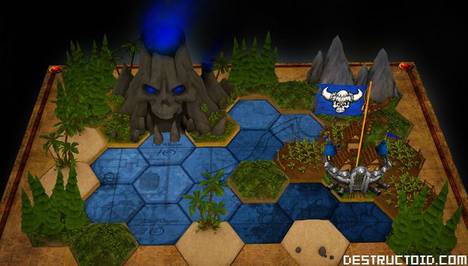 When I first set eyes on Capcom’s Xbox LIVE Arcade/PlayStation Network/PC title Plunder, I will admit that I was a bit intimidated. Sitting next to familiar games like Street Fighter II HD and the top-down shooter 1942, I figured it would be far too complicated to play during the hustle and bustle of CAPTIVATE. I was wrong.

You see, Plunder is a casual real-time strategy game. Yup, there’s that word: “casual.” For someone like myself, it’s perfect, though. You’re simply required to move ships around a hexagonal grid, looting towns and taking out other pirate ships along the way. The game handles most of the “complicated” stuff, automatically attacking enemies, and harvesting resources from raided towns.

Playing mainly consists of pressing one button to issue all of your commands; there’s no overly complex menus to wade through. The game ships with 25 maps, and also offers the option to create and share your own. Four players can battle on one console, with up to eight over LAN or the Internet.

For some, this approachable RTS is going to be a blessing. Others may find that the game lacks depth they’re looking for. But if you enjoy looking like you’re doing something complicated when you’re really just tapping the “A” button over and over again, you might want to drop $9.99 on Plunder when it drops this summer.