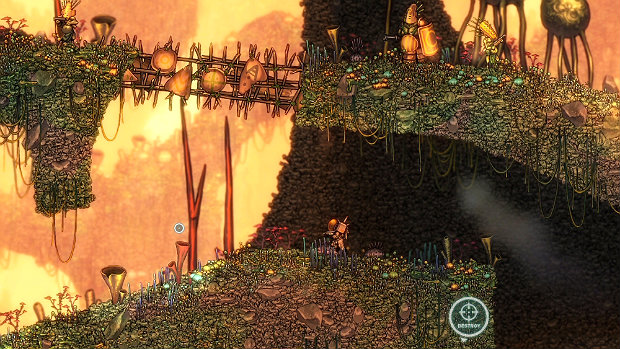 Over two years since it was announced — and several months since it became available on Steam — Alientrap’s 2D shooter Capsized is coming soon to the AppStore, PlayStation Network, and Xbox Live Arcade.

First things first: Capsized will hit XBLA next month for the now-standard $10, with the attendant campaign, Death Match, Time Trial, and Survival modes. According to today’s press release, there’s also an “Armless Fighting mode,” whatever that is.

How do you fight without arms?

In stranger news the physics- and exploration-based game will be available for free on the iPad in January. The game’s mechanics have been re-tooled to match the touch-screen interface, and all the fully-priced modes will make the jump. While the press release isn’t explicit, Alientrap are introducing an in-game currency system to the iPad version, ostensibly “to make purchases and upgrades to weapons, skills, health and accessories.”

“In-game currency” sounds a lot like “in-app purchases” to my cynical ears. Given that “free to play” has garnered such pejorative connotations of late, I can’t really blame Alientrap for trying to skirt that label.

In any case, I love the look and feel of Capsized hostile alien mega-jungle, with the caveat that precise platforming and touch controls make uneasy bedfellows. XBLA for me!

Capsized coming to iPad for free in January [Joystiq]