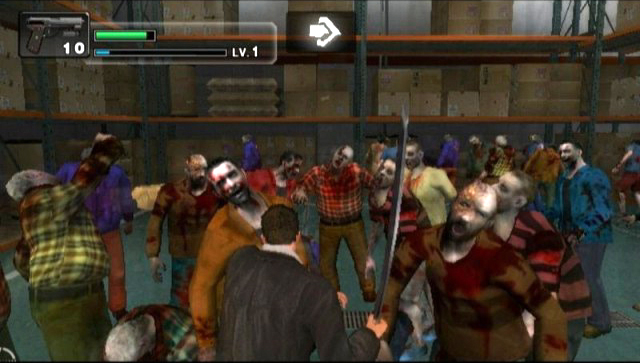 Have you read any the hands-on impressions of upcoming 360 to Wii port of Dead Rising? If so, you know that things are looking pretty grim. It doesn’t matter if you are generally Wii-skeptical like our Editor-in-Chief Nick Chester (who awarded the game “Worst in Show” at this year’s TGS awards ceremony), or full fledged Wii fanboy like GoNintendo’s Raw Meat Cowboy, everyone who has played Dead Rising: Chop Till You Drop in its current form has more or less deemed the game to be a waste of time. With a reported average of six zombies on screen, how could it be anything but a waste of time? Even Resident Evil 2 on the PSX offered more zombies than that.

According to Seth Killian, Capcom Community Senior Manager, there is still reason to hope this game will be more than just an embarrassment to the Dead Rising name. Seth says “No press or media” have seen the final build of the game, which is  “almost done”, and will have “more zombies on the screen”. That’s in no way a promise the game will move itself from “waste of time” to “game of the year” status, but its certainly the best Dead Rising: Chop Till You Drop news we’ve gotten in a while.

Hit the jump for Seth’s full statement (and a customary weekend rant from myself).

“I’m not sure where ‘this is the final build’ stuff is coming from, because that is simply not true. The TGS “build” was mostly just a tech demo and is not the actual or final game, guys…I believe the situation is this: 1) the final game is almost done. 2) the final game is NOT the tech demo shown at Leipzig or TGS. The tech demo is a tech demo, and is not the final game. No press or media have yet seen the version of the game that Nikai was talking about when he said it was basically done. Someone at Capcom said there would be a new version of the game at TGS because that was the plan, but for reasons I dunno the details on, it didn’t happen. As for why we would show the same thing over again, it mostly boils down to different producers having different attitudes, and Nikai definitely has his own way of doing things. This is not a hair-splitting technicality, as I know a number of things have changed. I haven’t played the final build, so I dunno if it’s going to be 3000% different, but I have seen screenshots, and yes, there are more zombies on the screen and a few other notable changes. I can’t promise the moon without having actually played it, but I’m not trying to double-talk you here. The TGS build is not the final game, and there do appear to be some positive changes going forward.” – Seth Killian, Capcom Community Sr. Manager

So how does that sound to you, kids? Got any hope at all for this port, or would it actually please you for it to turn out to be crap?

I figure a lot of competitive minded 360 owners hate the idea of this port, as its existence for them does nothing but diminish the special feeling they get from having Dead Rising access that Wii owners don’t. I’m actually surprised that no one has started a “DEVIL MAY CRY 4 ON TEH 360 IS A BETRAYAL TO TEH FANZ”-style petition to try to keep Dead Rising: Chop Till You Drop from even being released. That’s how insulting and irritating this port is to some Destructoid readers (and maybe staff as well), but I know there are also a lot of you out there who are actually rooting for this game. I’m not just talking about Wii owners who don’t own a 360 and want a chance to play Dead Rising, I’m talking about people who (despite what “Grinchy Luke Plunkett” may say) just think that Dead Rising: Chop Till You Drop is a pretty good idea, and could do a lot to move the series forward.

It’s not like Dead Rising was a perfect game, and the camera and combat systems were arguably its greatest flaws. Erasing and re-writing them with code from Resident Evil 4: Wii Edition would do wonders to make Dead Rising more playable, which is exactly what Dead Rising: Chop Till You Drop is supposed to do. Everyone I know who loves Dead Rising loves it for its premise, and not necessarily for its gameplay. As long as Capcom makes good on retaining that premise by filling Dead Rising: Chop Till You Drop with zombies (they are still promising up to one hundred on-screen zombies at a time), then I see no reason why this port couldn’t be a valid alternative to the original.

Note that I said alternative, and not replacement. Dead Rising on the 360 could only be replaced by a game that offers even more zombies, more weapons, bigger areas, crazier bosses, more of all the stuff that made the original worth playing. That’s what a full fledged sequel to Dead Rising could be, which brings me to my next point.

I want Dead Rising: Chop Till You Drop to do well so more people can appreciate Dead Rising, because that is the only way we’re going to get a Dead Rising sequel. Despite the country’s long love affair with everything zombie, Dead Rising just wasn’t enough to sell 360s in Japan (maybe if it were a JRPG, things would have been different). Putting Dead Rising on the Wii is the perfect way to expose millions of Japanese (and American) zombie-embracing Wii owners to a game that was made specifically for them, a game many missed out on because they didn’t have the scratch to buy a 360 and a Wii.

Contrary to what some may think, there are a lot of these “zombie-embracing Wii owners” out there, and I don’t just mean in the form of cuddle-loving nursing home residents (though there are a lot of them out there too). More than one million people bought Resident Evil 4: Wii Edition for the full retail price of forty bucks, despite the fact that the game was already available on the console for half that (via Gamecube backwards compatibility). Resident Evil: Umbrella Chronicles also sold over one million copies. I don’t know how much House of the Dead 2 + 3 sold, but it was enough to warrant the Wii-exclusive House of the Dead: Overkill. The numbers make it clear: pointer-aiming + zombies = money. If Dead Rising: Chop Till You Drop utilizes pointer-aiming properly, and keeps that zombie head-count high, it’s likely to make millions for Capcom. If the opposite happens, if the game sucks and sells like crap, then the likelihood of a Dead Rising sequel will be all the more diminished.

Knowing all that, how can any self-respecting Dead Rising fan not want this port to turn out nice?