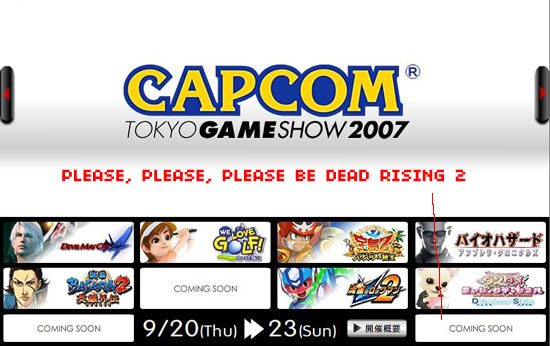 Capcom’s Japanese Web site has just launched a 2007 Tokyo Game Show teaser page, giving some details of what will be shown at the event.

These titles are all listed as playable, so you can be sure we’ll do our best get our hands on these next month. I’m looking forward to some hands-on with Devil May Cry 4 and Resident Evil Umbrella Chronicles, but Nick says he’s most excited about the cute doggies in Wantame Music Channel.

Nick says, “I’m going to spend all of my time with Wantame Music Channel. Expect great coverage of it from me coming out of TGS.”

Alright, I’m going to go before I get my ass kicked.