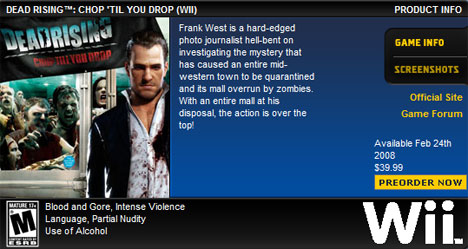 According to a listing on Capcom’s official online store, it looks like Dead Rising: Chop Til You Drop will be available for the Wii on February 24. This conflicts with other retailers who are listing the game for a late January release; we’re inclined to go with Capcom on this one.

It’s also interesting to note that the list of features includes “Take pictures to capture all the intense action to earn points and new items.” The last we heard, the photo-taking gameplay mechanic from the Xbox 360 version of Dead Rising was being stripped from the Wii port. This feature list could be a hold-over from the 360 version’s fact sheet, so don’t get your hopes up just yet.

I’ve been pretty hard on Dead Rising: Chop Till You Drop, put off by the fact that many features are being stripped from the original, including the number of zombies. After I played it, I wasn’t too thrilled with it either. But getting close to release, there’s still a part of me that wants to pick it up. Maybe if Capcom can get that $39.99 price tag a bit closer to $29.99, we’d be in business.