Dragon’s Dogma sounded pretty awesome when Capcom first announced it at its Captivate event back in April, but it was pretty hard to gauge what the game was exactly about. It looked a bit like a proper HD Monster Hunter type of game to me.

When Capcom explained what the game was really about, it was much different from what I had expected.

With an open world to traverse that is full of monsters of all kinds, Capcom wants to put more action into the genre of open-world games that feature giant monsters. The story is affected by over 400 voiced NPCs that all live their lives and act out their own 24-hour schedule.

The world in Dragon’s Dogma is fantasy-like, but grounded in a more realistic form of medieval fantasy if that makes any sense. It means there are still monsters, magic, and skeletons, but magic is not of your usual spellcasting variety. Mages don’t have mana points and instead have to chant and summon spells, which takes time during which they are vulnerable.

Thankfully, such a mage would not have to face giant monsters or smaller enemies alone, as Dragon’s Dogma features a party of up to four characters. As the protagonist, you are of course the most important. But an intriguing system called “pawns” is there to fill your party, affect the storyline, and even elicit some online elements that work in a Demon’s Souls fashion. 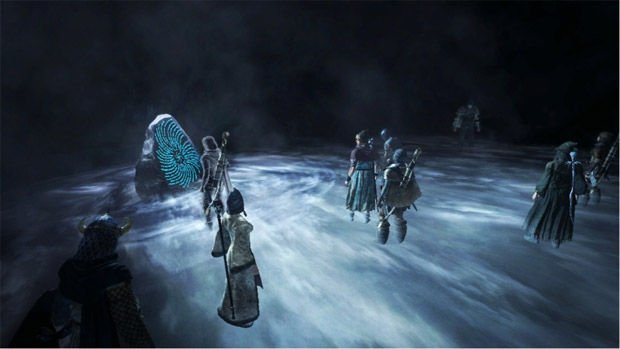 Pawns are otherworldly creatures that look human, but are actually immortal. They never age and never die, although they can be defeated in combat which sends them back to a place called The Rift. For some reason, these creatures feel compelled to follow your protagonist without really understanding why they do so.

While they form your party, they are different than traditional RPG party members. You choose one main companion pawn who will be at your side throughout the game. This pawn is fully customizable, but all the choices you make for it in the game will also impact the outcome of the story.

Filling up the two remaining slots are support pawns, which can be recruited from The Rift. These act as mercenaries that can be swapped out depending on what types of pawns you need for what kind of combat situation, but here is where it gets interesting. You can use another player’s companion pawn as one of your support pawns.

Dragon’s Dogma features an online system that lets you share your pawn with the world. The more useful and powerful your companion pawn is, the more likely it is that other players will use it. When they are done using your pawn — which will remain by your side regardless of being used elsewhere — your pawn will “return” with information gained in other people’s games and a form of currency called Rim crystals, which is used to purchase items or recruit higher-level pawns.

If your pawn is among the best in The Rift, populated by all player’s companions, then more people will use it and you’ll earn more money and information about the world. 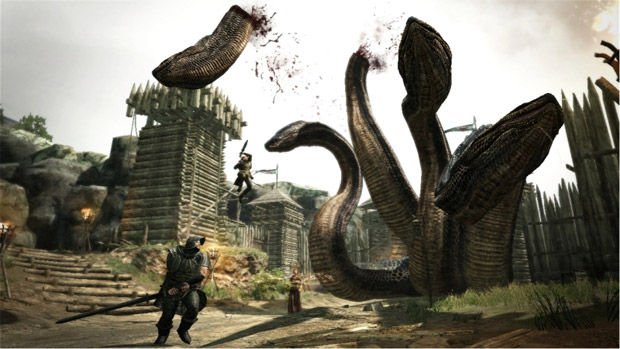 The pawn system is a really interesting way to link a single-player game to the online world without requiring multiplayer gameplay. Capcom decided against cooperative online play as a design decision because they felt that co-op play often breaks the AI and ruins the player’s immersion in the world and the story.

This is unfortunate if you were hoping to play Dragon’s Dogma online, since it looked like such a co-op oriented game. But the pawn system is there instead to make you change your tactics and play in different ways throughout the game. Whether you are just questing and slaying random monsters or hunting giant boss monsters that you can climb and kill in fancy ways, you’ll have to adjust your party accordingly choosing those pawns that fit that situation. If you can only play your console offline, don’t fret; the game comes with hundreds of pre-created pawns.

With a large world to explore and a story that is impacted by your choice of character, how you play the game, and how you treat your companion pawn, as well as the online elements, Dragon’s Dogma has the potential to become a truly great game. Hopefully it will also be fun to play.