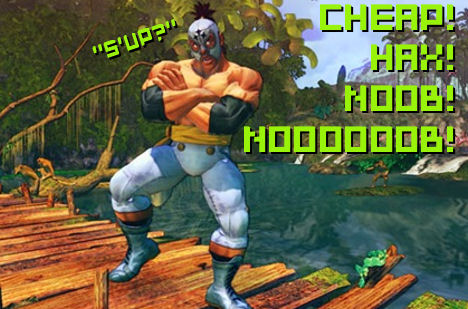 Yesterday we reported that Street Fighter IV may have had its first broken character in El Fuerte when it was suggested that the newcomer had an infinite combo — something that would inflict “black sheep” status on the masked luchadore among the fighting game elite. Capcom, for its part, has denied that El Fuerte possesses an infinite combo and has stated that the video currently showing an example of the move proves nothing.

“In that video El Fuerte does not chain together infinite FP cancels. He chains some together to dizzy the opponent and then repeats a similar combo to win in one round, but that hardly constitutes the use of the term ‘infinite’,” stated a Capcom rep. “Let’s wait and see what the Japanese players say about the tiering before we hastily condemn anything. El Fuerte is currently considered the weakest player in the game, and I doubt this ultra-difficult combo will suddenly push him above Blanka and Sagat.”

Ah, the world of fighting games both amuses and bemuses me at the same time. All this talk of canceling and infinites and tiers and whatnot. Well, we’ll just sit tight and wait for the crazy hardcore elitists to tear this game limb from limb before casting El Fuerte into the fire.