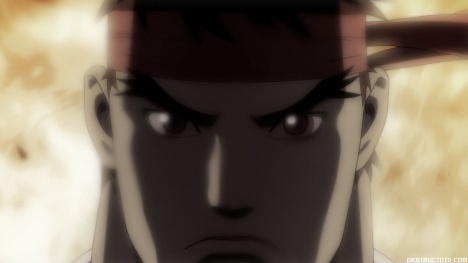 Around the time of CAPTIVATE, our own Nick Chester told you about the sweet anime intros and endings that would come with Street Fighter IV’s console incarnation. If the pics of them left you drooling, this news ought to send you into full seizure: Capcom has announced a full-length anime film will be made by Studio 4C, the same guys that produced the intro and endings previously shown off.

Since Street Fighter IV will fall betwen Street Fighter II and III, the question of how II and IV‘s storylines will be tied together has often been discussed hotly on an internet forum. The movie aims to do just that. From 1Up:

A 3-minute trailer for the movie was evidently shown during a presentation at Tokyo Game Show last week, which contained scenes featuring Cammy, Ryu fighting Crimson Viper, and Sakura fighting Chun-Li (both Cammy and Sakura are recently revealed additions to Street Fighter IV). According to Street Fighter IV producer Yoshinori Ono, the film’s run-time should total around 50 to 60 minutes.

Ono also commented that the movie would be tied to the game’s release rather than sold as a separate product, which is really, really cool, as I am sure many fans would have forked over an additional twenty dollars for it. Considering the game is slated to launch early next year in Japan, we should know soon if the movie will be a pack-in. Cool news, indeed!