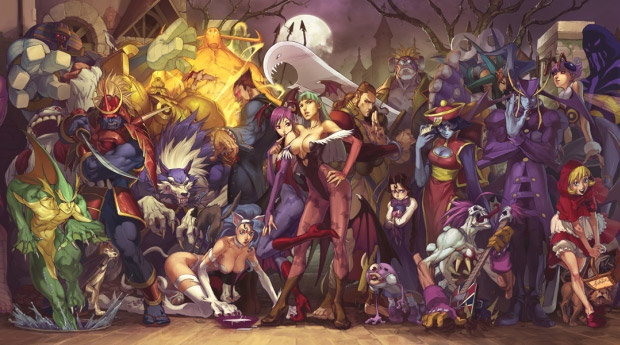 [Update: The official word from Capcom has come in. This package includes Night Warriors: Darkstalkers’ Revenge, not the original game, Darkstalkers: The Night Warriors, as originally reported. The release date is still “early 2013,” but they did give a price: $14.99 / 1600 Microsoft Points.]

Finally, we have the opportunity to write “Darkstalkers” and “Yoshinori Ono” in the same sentence without having to preface everything with a big rumor warning. Announced today by Capcom at a New York Comic Con 2012 panel, Darkstalkers: The Night Warriors and Darkstalkers 3 will be digitally bundled for release on PlayStation Network and Xbox Live Arcade.

Dubbed Darkstalkers Resurrection and due out later next year, this will be in line with prior Capcom re-releases of fighting games. You can expect online multiplayer and matchmaking, replay uploading to YouTube, a spectator mode, HD filtering, and more.

Maybe, just maybe, if this does well enough, Capcom will consider developing a brand new title in this series. I’m probably getting my hopes up, though.

SAN MATEO, Calif. — October 11, 2012 — Capcom, a leading worldwide developer and publisher of video games, today announced that the fan-favorite Darkstalkers® franchise is back and ready to take the fight to current gen consoles. Featuring a unique and colorful cast of characters, blended with fast-paced fighting action, Darkstalkers® Resurrection contains two games, Night Warriors: Darkstalkers Revenge and Darkstalkers 3, that will be available to download in early 2013 for $14.99 on PlayStation®Network and 1600 Microsoft Points on Xbox LIVE® Arcade for the Xbox® video game and entertainment system from Microsoft.

While taking a break from competition, players have replay sharing and Challenge Mode at their disposal to help them hone their fighting game skills.  Replays can be uploaded to the game’s match server or directly to YouTube. The Challenge/Tutorial Mode contains trials to help players deepen their knowledge of the characters and their specific strategies. For those that prefer to learn from watching other people play, Spectator Mode and “Watch With Friends” allows players to watch games either live online or saved from previous matches. Players can discuss both live and saved games in real time.