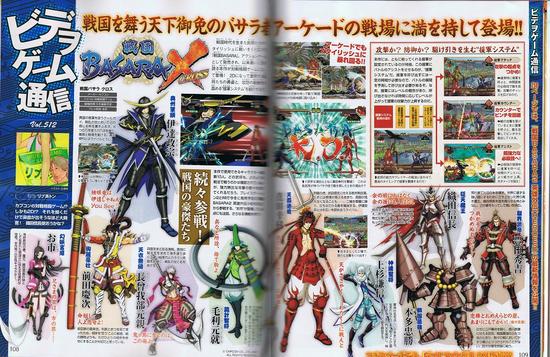 After hearing the painful announcement of the bastardization of my favorite 2-D fighter, Capcom has announced Basara Cross, a new 2-D fighter that will make me forget about Guilty Gear 2 just a little bit. This is, of course, the “new 2-D fighter” from Capcom that we talked about earlier in the month.

For those of you here in the States, you might remember the game Devil Kings, or Sengoku Basara, which this game is based off of. So, they’ve taken a 3-D brawler and turned it into a 2-D fighter…the exact opposite of Arc and Guilty Gear. Does anyone else sense the irony?

Well, as you can see from the scan (check it out in full-size below), it looks like the characters are taking after Guilty Gear for their extreme looks. Especially that guy with the giant ring. That’ll be interesting to play with. All in all, we’ve got the 10 characters in the scans and the fact that the game should be coming to the PS2 and the Wii as some information.

Please, God, let this be awesome. I’m banking on it.