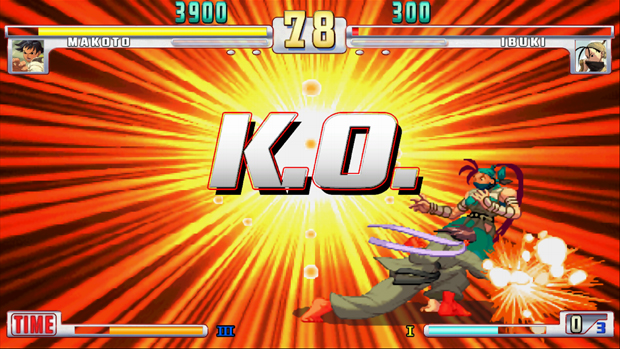 In the past, Capcom have earned themselves a less than favourable reputation when it comes to downloadable content for its games. Fans have displayed everything from mild annoyance to white hot rage every time Capcom reveal their plans for further ways to get more of your money. It comes as no surprise that Street Fighter III: 3rd Strike Online Edition is no different. Announced by Capcom Unity, three packs of DLC will be available for purchase this year.

Firstly and most importantly, Capcom held an in-house tournament called “Fight For The Future 2011.” Featuring sixteen of the world’s best 3rd Strike players, video of the top eight matches will be available as DLC in two “Match Packs” (later this year), the first being the top eight and the second featuring a “best-of” compilation. Both will have commentary by James Chen. Secondly, there will be “Music Packs” (next month) which add all the character themes from the first two Street Fighter III games.

Thirdly, there will be “Costume Pack 1” available next week. It’s consists of seven new colors for every character and it’s priced at $2.99. As expected, you won’t be able to see the new shades of pink and orange on opponents if you yourself haven’t bought the pack. But perhaps more unexpected, Capcom have stated the new color palettes will not show up in replays. Hmm, Capcom. That last pack will probably get some reactions.