I’m very open about the reason I hired a sports writer for Destructoid. I don’t watch sports and I don’t play sports, so it stands to reason I probably don’t play many (if any) traditional sports videogames. On the other hand, Midway’s arcade sports champ, NBA Jam (and its various spin-offs) had my attention. Easy to pick up and play, it required nearly no knowledge of the sport itself — it was simply fun.

So when I spotted Tecmo Koei’s PlayStation Network and Xbox LIVE Arcade title NBA Unrivaled at their Tokyo Game Show party (yes, the one where this happened), I ran towards the demo unit. Tecmo makes very little effort to cover up the fact that it’s inspired by Midway’s title; the fact sheet reads that it pays “homage to the old school look and feel of the arcade classics.” In other words, NBA Jam.

So does it look like NBA Unrivaled is going to recapture that early-90s arcade experience? Impressions after the jump.

In most ways, NBA Unrivaled will seem familiar to fans of NBA Jam. The game features all 30 NBA teams, fully licensed with logos and top-talent from the 2009-2010 roster. While the game is a departure in that it features 5-on-5 games (versus Jam’s two-on-two), the core gameplay isn’t made any more complicated for it. You shoot, you pass, you block, and you can use a “turbo” button to add little “oomph” to all of your movements.

There’s even a momentum meter that fills as you play. Once maxed out, your entire team will go into something called “Momentum Mania,” Unrivaled‘s version of the “He’s on fire!” boost from NBA Jam. While in momentum, your team’s offensive and defensive abilities are maxed out, thus resulting in bigger, flashing plays and dunks. 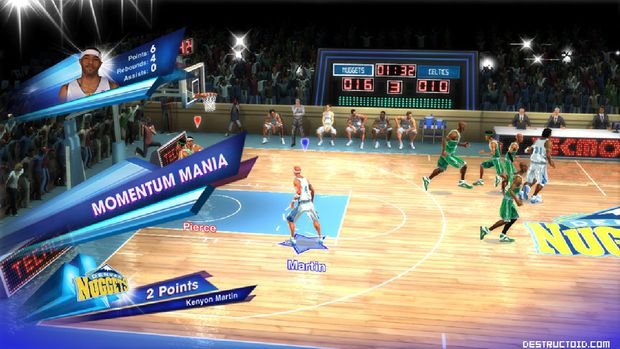 While all of this probably sounds great on paper, particular to fans of arcade-style sports games, once I got my hands on the sticks everything kind of fell apart. The pace of the action was slower than I had expected, and to match the pace the controls felt a bit sluggish. While the game has a unique cel-shaded style that looks good in still shots (and pretty cool in the close-up slam drunk scenes that you can trigger), the animation for the players leaves a lot of be desired. In true Tecmo fashion, however, the best looking thing about the game was the female cheerleaders.

While some of this stuff can be addressed before the game ships (or whatever we should be calling it when a digital download is released), the projected 2009 release date leaves me wary. The game does feature support for up to two-players, both locally and offline (competitive or cooperative), so that’s a plus. But if Tecmo can’t make the experience a bit smoother before it’s released, the “unrivaled” in the title may be more telling than it had intended. Finding a friend to play with may be your biggest challenge.