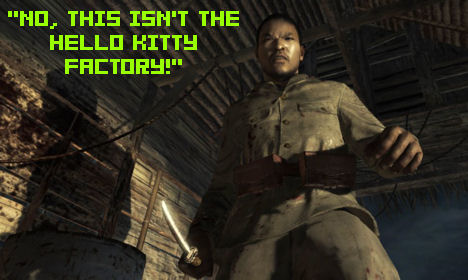 For those of you following Treyarch’s sequel to Infinity Ward’s excellent Modern Warfare, we have a treat for you in the form of screenshots and details concerning the Pacific Front-flavored FPS.

A more detailed post is coming soon from our very own Nick Chester, but in the meantime we have plenty for you to be getting on with, including pictures of torture, flamethrowers and scary Japanese people. Yes, Call of Duty: World at War has the three best things ever invented.

Hit the jump for all the hot details.

If you’ve been following this game at all, you should know by now that World at War is going to be using the same engine as Modern Warfare, though it has been adapted to allow for environmental changes. The much-lauded flamethrower, for example, can be used by players to to burn away cover and leave “a charred battlefield — and foes — in their wake.”

World at War will also be the first game in the series to include co-op play and goes by the mantra of “No One Fights Alone.” Up to four players will be able to take it to the Japanese forces online, while two can fight alongside each other in a split-screen mode. The single-player campaign will include challenges, rankings and online stats for co-op play.

You’ll be taking on the role of U.S. and Russian soldiers as they fight against enemies “that employ lethal new tactics and know no fear, no mercy, nor the rules of war.” The game’s various battles are said to be fought on multiple fronts and will serve “the grittiest, most chaotic and cinematically intense experience to date.”

I don’t think cinematically is a word, by the way.

As far as the multiplayer goes, Treyarch again intends to build on CoD4‘s foundations. The focus on squad teamwork is going to be increased with party systems that favor those working together. Both infantry and vehicles will be present in the multiplayer, and the perk system, as we already know, is returning.

Among the more intriguing inclusions are kamikaze fighters, ambush attacks and banzai charges. The team is setting out to make the Japanese forces intimidating and scary opponents, and promise a harrowing experience for all.

Treyarch is setting some lofty goals and really hopes to prove itself with World at War. These details promise a lot, and one can but hope they deliver, because Call of Duty: World at War will be something really special if it meets its expectations.