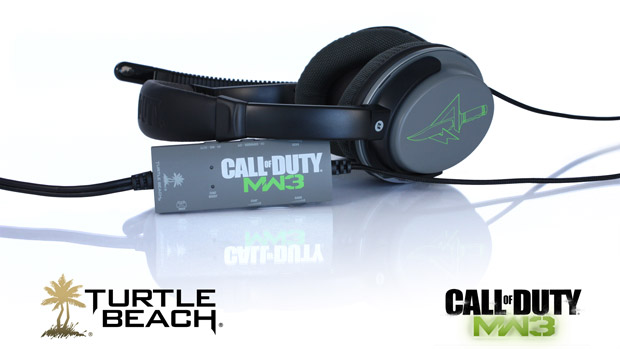 Turtle Beach has partnered with Activision to create a line of specifically tailored new headsets with a big and tasty piece of meat Call of Duty: Modern Warfare 3 logo on them. I heard the State of New York recently had the common sense to pass a law that allows people to wear these things in public, finally becoming part of Western civilization — how delightfully “liberal” of them.

This new line headsets dubbed “Ear Force” look pretty nice spec-wise though, despite being having ridiculous names and being way overpriced, and some models even have custom audio presets designed for Modern Warfare 3 by studly boys at Sledgehammer Games and Infinity Ward. So that way you can specifically hear those bearded men’s footsteps when they try to hug you from a direction you aren’t looking in. Oh wait, that was Medal of Honor.

Check out what you’ll get in the different sizes of packages below. No no, eyes up here gents.

The Turtle Beach headsets are supposed to be pretty great when it comes to audio fidelity, although if you don’t really care for the branding you can just as easily pick up the programmable PX5 instead of the Ear Force Delta. That one is only $249.95!

But really, how are you going to say you turned a Tango that was approaching your Forward Operating Base into a K.I.A., or remove the bonds of non-branded social stigma, without some official CUT-MWAH-FREE branding?