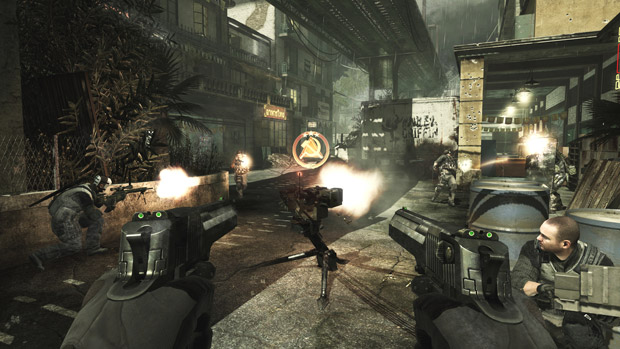 While the core services of Activision’s Call of Duty Elite will be free, players who invest in a “Premium” membership will be a bit more elite than your usual elite.

Priced at $49.99 a year, Premium members will get access to every piece of downloadable content available for Modern Warfare 3 through the year. Activision has already confirmed that this will consist of 20 new pieces of content, although it didn’t go into any more detail. Purchased standalone, that same content would cost players $60, said Activision’s Eric Hirshberg.

To sweeten the deal, Premium members will also get access to that DLC content earlier. While the standard model for Call of Duty DLC has been four content drops spread over the course of a year, Premium members will be drip-fed that new content monthly. According to Hirshberg, that new content won’t simply be new multiplayer maps; players can also expect new Spec Ops maps, game modes, and more.

Additionally, Premium members get access to daily competitions and events where they can snag prizes, both real and virtual. Activision is offering everything from in-game badges and trophies, to iPads and (no seriously) jeeps.

“These aren’t just competitions for pros,” adds Hirshberg, “we’re gonna have competitions tailored for players of all skill levels, and these competitions will be managed and refereed by real people, 24/7.”

Out of the box, all Modern Warfare 3 users will be able to use Elite to form and manage clans. But only premium members will get the benefits of leveling up their clans by participating in tournaments and competitions.

“Everything you love about leveling up as an individual player, Premium Elite members can do as a clan,” explains Hirschberg. “It’s like your own fantasy football team inside Call of Duty Elite, except players you’re counting on are your friends and teammates.”

Expert strategies and analysis is also being made to Elite players, with new content being added regularly. These “high production value” video clips designed by the “best players in the world” will give gamers a deeper insight into using weapons and navigating the game’s maps.

As if all of that weren’t enough, Activision also has Hollywood talent on board to provide original content for something it’s calling Elite TV. These episodic videos will be created using the Modern Warfare 3 engine, and while they’re not ready to show any examples just yet, Hirshberg was willing to give some details on two Elite TV shows.

“We’ve got a simple idea that brings real life rivals together in multiplayer to battle it out Call of Duty style,” he says of the Tony and Ridley Scott-produced Friday Night Fights, “whether it’s firemen versus cops, New York fans versus Boston fans, Democrats versus Republicans, football fans versus soccer fans, even a few famous celebrity rivals who play Call of Duty are gonna get involved.”

Will Arnett and Jason Bateman’s production company, DumbDumb have a show in the works, as well. It’s called Noob Toob, and the premise apparently seems to have Arnett and Bateman providing snarky smack-talking commentary on various player clips.

Not up for shelling out $49.99 for all of the above perks? There’s another way to get a full year of Premium Elite: it comes with the “Hardened Edition” of the upcoming shooter. Additionally, those who purchase the set will get lifetime Premium Elite “founders” status, which sounds good for bragging rights and not much else.

Given everything that Activision is offering, it certainly does seem as if Premium Elite service is a sweet deal for Call of Duty diehards. While casual fans who are reluctant to buy add-on content for the shooter may not find value in the service, there’s plenty here for those who purchase new map packs every few months. What do you think of what Activision is offering? Are you ready to go all in, or are the standard Elite services enough?