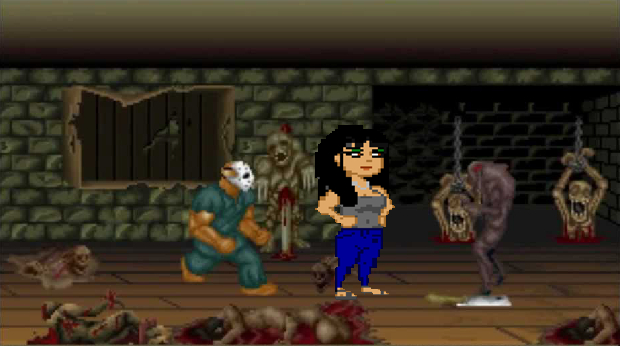 A lot of people cite Super Metroid as the first game that showed them how tense and isolated videogames can make them feel. For me, that realization came four years earlier when I picked up Splatterhouse on the Turbografx-16. Like Super Metroid, it didn’t seem to care that it was a videogame. It wasn’t afraid to do things that games were not expected to do, things that few believed were strengths of the medium at the time. Unlike Super Metroid, those things involved meeting your mutant girlfriend in a bloody battle to the death as she intermittently begged for help, and being torn apart by by a man with chainsaws where his hands used to be. It’s like and Evil Dead, Dario Argento, and Jason Vhorhees slumber party in game form.

While the game has been utterly outclassed in nearly every way in the years that followed, it still holds a strong place in the hearts of those who experienced it for the first time back back in the 90s. Caitlin Oliver is one of those people. She’s loved Splatterhouse for a long time, and that love lead her to become the current global high score holder in the original arcade version of gross out classic.

She’s shooting for another high score right now, streaming by Galloping Ghost Arcade over on Twitch. Keep up with her on Twitter or on her personal webpage (packed with spooky horror game gifs) for more future gross high score arcade action. She may go for Altered Beast next.