Ah, Grand Theft Auto IV. It’s perhaps the biggest release in the history of video games, and it has received near-universal acclaim — well, that’s except for a few facets: namely, the multiplayer and the driving. Regarding that second point, I received a couple of emails earlier this week asking about a “driving guide” that I had supposedly written up, and I also saw a number of comments wondering when it would be released. I had no idea how word of it got out until I noticed Jim’s “Second Jimpressions” blog, in which he mentioned the “ridiculously lengthy tutorial on car turning” that I had written in a staff emailer.

Well, I don’t mean to burst your bubble, folks, but this purported driving guide is nothing profound. It doesn’t comprise any “secrets” or anything of the sort; it merely consists of some tips on how to keep your vehicle under control on the streets of Liberty City. Hell, it wasn’t even close to this long when I originally typed it up. But before I get to it, I’ve also included a bit of background on the vehicles in GTA IV, and my opinion of the changes that Rockstar has made. Hit the jump to go back to driver’s ed.

[Editor’s note: This was originally posted in my community blog, but at Reverend Anthony’s suggestion, I’ve moved it here. Enjoy!] 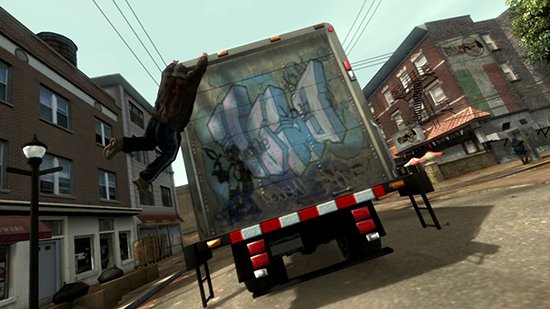 Rockstar completely revamped the in-game physics this time around, going with NaturalMotion’s euphoria engine. As some of you may know, the engine takes the real human body into account in its calculations, and all “collisions” and movements are controlled by it. So if you hit someone with your car, what you’ll see is a result of a calculation done by the engine based on your speed, the angle at which you hit the pedestrian, the person’s body type (height, weight, etc.), the part of the car that you hit the person with, etc.

As far as I can tell, this applies to the cars as well, and that’s what I love about the driving in GTA IV. Rockstar strived to make the driving much more realistic this time around, and while GTA isn’t quite GT all of a sudden, the difference is like night and day. Essentially, Rockstar has “nerfed” the handbrake. You can’t just take a corner at 70 mph by mastering the handbrake anymore, which makes sense. I mean, yeah, it may not be as much quote-unquote fun, but once you figure out the driving, you’ll be doing just fine.

So for those of you who are having trouble with the turns (like doing a 180° instead of a 90°, so to speak), here’s my guide. Again, it’s mostly common sense. It goes through the motions of a right turn when you’re at high speed (and by the way, I have the game on PS3, so just change the buttons accordingly if you’re playing on 360). 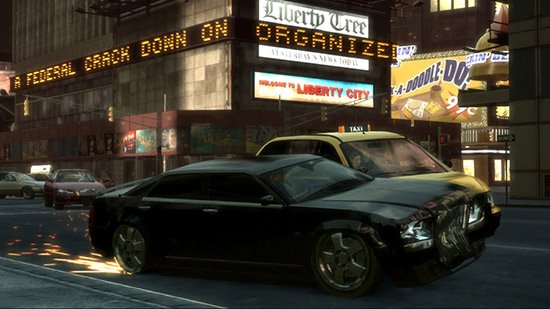 With a smashed front end and a blown tire, it would be wise to find a new mode of transportation.

1) Slow down, aka “USE THE BLOODY BRAKES”. You know that L2 button? Yeah, well, if you’re flying down the Broker-Dukes Expressway, you might want to press it and hold it — for a while — before you attempt a turn. I really can’t stress this enough: in GTA IV, you will NOT be able to take a turn at high speed by just using the handbrake, unless you want to crash into things. If you’re really close to the turn and you feel like you won’t be able to slow down enough, remember to use the brakes in conjunction with the handbrake (i.e., press L2 and R1); that’ll help a lot. But don’t be too overzealous with the L2 button, or you’ll end up going in reverse.

2) Once you’ve slowed down to a moderate speed, start turning the left analog stick to the right, and TAP the handbrake at the same time. Seriously. DO NOT even think about holding the R1 button for more than a split second, because if you do, you will either spin out or end up facing in the direction you came from (otherwise known as doing a 180°).

But there’s more to it than that. Again, because the physics are more realistic, everything depends on what you’re driving. If you’re in a sports car (e.g., a Turismo or Feltzer), then you have to be very light on the handbrake, lest you go spinning out of control due to oversteer. But if you’re in something bulky (e.g., a bus or a Gruppe Sechs armored car), you’ll generally have much more leeway with the handbrake, because larger vehicles tend to have a lot of understeer. The key is to learn how to use the handbrake judiciously. 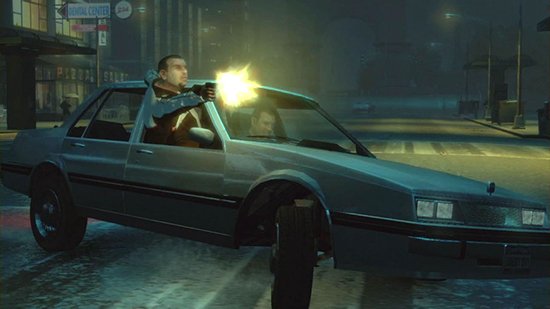 These guys have got turning down to a science. By the way, doesn’t that look just like an old Buick Century?

3) As soon as you’ve begun drifting, quickly turn the wheels in the opposite (left) direction to correct yourself. I say this because you will usually have turned too far to the right anyway (but that’s also how drifting works — your vehicle slides for a while, and then you get it back under control with corrective steering).

If you didn’t slow down enough in step 1, you’ll probably notice that your car is sliding uncontrollably towards oncoming traffic, instead of into the proper direction of the cross street that you’re trying to turn onto. In this case, use the brakes, and the brakes only (that’s L2, NOT the R1 handbrake) to help get your automobile back on track.

4) Hit the gas once you’re facing in the correct direction; that should iron out any remaining directional kinks in your turn. And of course, you’ll have to use that in conjunction with the left analog stick to help orient yourself in a straight direction.

But here’s a caveat: if you hit the gas and hear the engine revving with a high-pitched whine, and you notice that your car slides around with just a touch of the left analog stick, it means that you’re still skidding (because your wheels have locked). Let go of the R2 button until the engine stops redlining (you should only have to let off the accelerator for a split second), and then immediately hit the gas again to speed up and complete the turn. 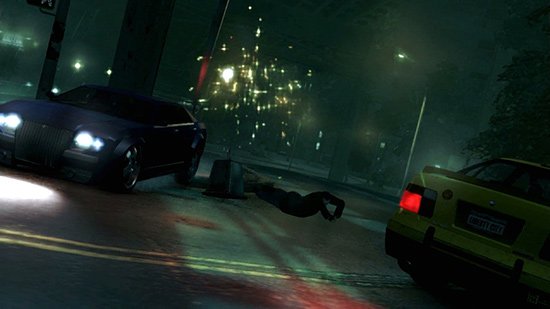 Remember, kids: humans and streetlights don’t count as obstacles, but trees do.

I should note that the driving in this game is going to take some getting used to. It took me a good half hour of sliding around and crashing into things before I got it down pat, but now I have absolutely no problems weaving through traffic at high speed (like on the East Borough Bridge) and making turns. Again, the key is to be mindful of the type of vehicle that you’re in, because everything is going to depend upon that (as it should). And remember: if all else fails (i.e., you still suck at turning after reading this guide), rest assured that the cars will get exponentially better once you unlock Algonquin.

Here’s an example of the differences in handling. I got in an ice cream truck, and it felt top-heavy — the truck was tilting, almost to the point of being on two wheels, when I tried to take sharp turns. I hopped in a Banshee (the convertible sports car from the prior games), and that thing spins out like crazy if you floor it — that’s what happens when you have all that power under the hood along with rear-wheel steering. Every single vehicle feels different. Something else that’s going to take some time to get accustomed to is the camera change while turning. When you use the handbrake, the camera does this weird thing where it won’t turn with your car for a bit — you’ll see your car from the side — and then it’ll swing around. It’s strange, but like everything else, I got used to it after a while.

Someone else asked about how to do barrel rolls, and while I don’t have any specific tips for that — after all, it’s not like I’ll get an achievement for doing a few — I’d suggest doing what you’d do in a game like Burnout Paradise. That is, find a ramp — but when you drive off of it, only put half your car on it. Don’t aim for the middle of the ramp, as you usually would; aim for one side of it. The idea is to make the jump with the left or right half of your car on the ramp, and the other half on the street. That should allow you to do a barrel roll or two. Oh, and using a sports car will probably help, since they’re light.

I hope that this guide was of some use to you. I know that many of you will just yell things like “This was a letdown!” and “Pssh, I could’ve told you that” in the comments, but hopefully, some people will be helped out by it. And finally, if you’re looking for a TON of more general hints and tips on the rest of the game, head on over to Professor Pew’s excellent “GTA IV protips” blog. With his helpful hints and my driving guide, you can’t fail!