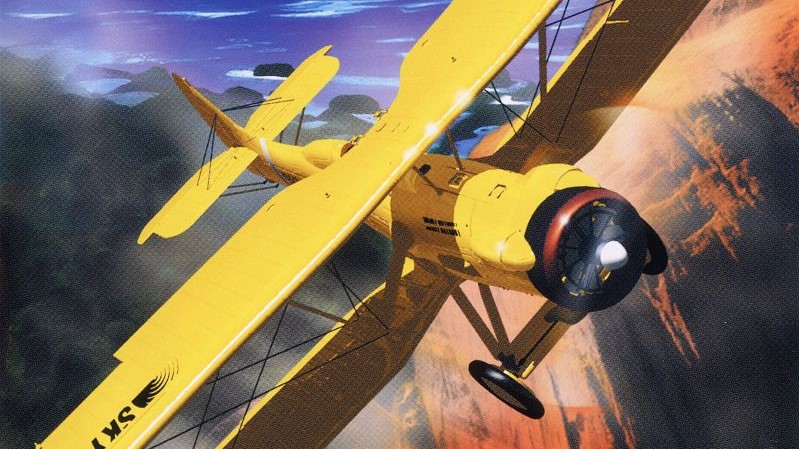 Sky Odyssey was a community recommendation from way, way back. Since then, I’ve had it earmarked, and I’m not sure why it’s taken me so long to get around to it. It was pitched to me as “like Pilotwings,” and I’m an absolute sucker for Pilotwings. As it turns out, it’s an apt comparison. It feels like the logical conclusion to the original SNES title’s fixed-wing biplane challenges.

I’m also something of a fan of flight sims, but have you noticed that there’s a dearth of arcade flight simulators? There are plenty of games about spitting ordinance at other aviators and many about just flying, but why am I not seeking out treasure or being encouraged to fly recklessly? A game that’s like, “there’s a massive storm; why not land on an aircraft carrier?” and you do that because there’s nothing more awesome to do.

And that’s 2000’s Sky Odyssey. It’s one of those games that makes you wonder why we don’t get more games like it. 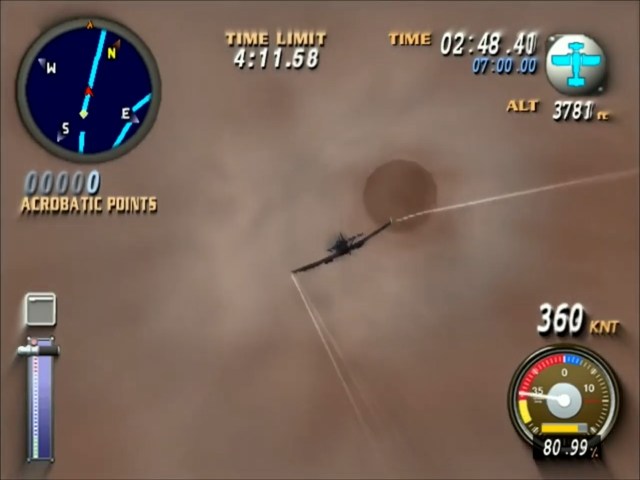 Here’s how a typical mission is set up in Sky Odyssey: cross the strait between islands. You are low on fuel. Rendezvous with an air tanker for more fuel. There’s fog. There are strong gusts. The islands below you are crumbling. Try not to die.

Sky Odyssey is a game that tells you to fly through air currents to pick up speed, then you find yourself fighting for control of your plane as it’s swept along. There are no half-measures here. In the first mission, you’re already threading through a ravine. The second mission of Sky Odyssey starts with your fuel line leaking, and you’re forced to match speeds with a train to top up and make it to the runway. I don’t know why you took off in the first place. Everyone told you that your fuel line was leaking; were you just not listening? It’s pretty fortunate that there’s a fuel train leaving the station right when you’re set to take off.

It feels like the design document was, “What’s the coolest thing you can do in a plane?” Below that was “Without combat.” And then below that was, “Not in the bathroom.” Every mission starts with “go to this location,” and then they just start adding in the sorts of nightmares that planes wake up screaming from. If Sky Odyssey ever got a sequel, they could only top these things with dragons and exploding zeppelins. Which I’m on board for. 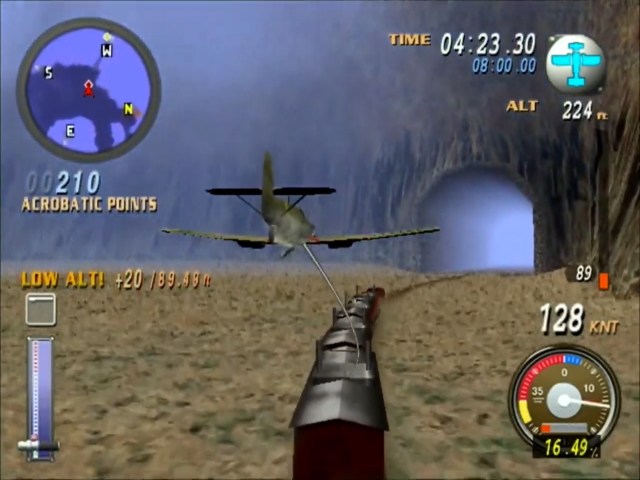 This isn’t about transportation, it’s about survival

It aims for a sweet spot between flight simulator and action game and nails it with unimaginable accuracy. The whole story involves hunting for treasure in the most air transportation unfriendly chain of islands in existence. It’s mostly just a framework to connect a bunch of harrowing flight missions around. This isn’t about transportation, it’s about survival. Survival in a world that really hates powered flight.

Along the way, you get to customize your plane, and this is sort of where I find Sky Odyssey to be at its weakest. There are three planes to start with, and anything beyond that is locked behind ridiculous criteria that are unexplained. Usually, this means beating the game’s other modes within time or point constraints, but one involves landing on alternate runways. It’s cool as an extra special feature, but the three planes you’re left with aren’t that exciting.

You get to choose a custom part every time you complete a mission. There are lots of ways to tweak your plane’s weight and power, but there’s usually little indication going into a mission that giving a specific attribute attention is beneficial. So, if you start a mission and find that a lightweight plane gets thrown around too easily, you have to fully exit back to the initial menu to be able to tweak things. It really throws a damper on experimentation and maximizing efficiency. 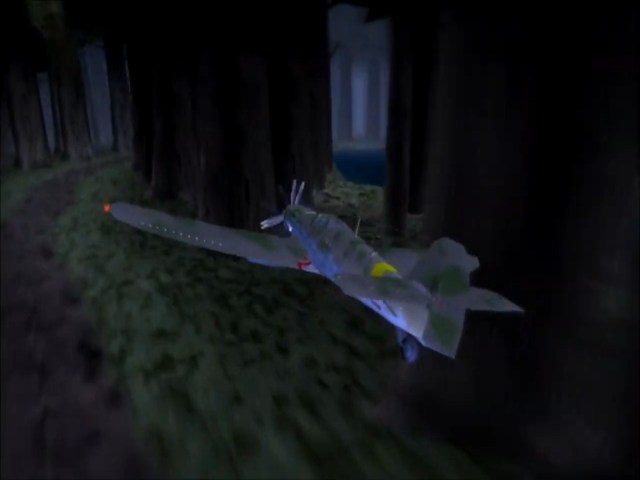 Sky Odyssey is also not a very long game. There aren’t a tonne of missions, but frustratingly, if you crash during a level, you have to start the whole thing from the beginning. Some flights can take up to 10 minutes, and it’s an absolute pain to do the whole thing again because of a small mistake. One time, I made the mistake of pulling up too hard while I was decelerating on a runway, and my plane spontaneously disassembled itself on the tarmac. I’m not sure whether it was a glitch or just something I don’t understand about aviation, but having to do the whole mission again when I was literally at the finish line is a horrible feeling.

This leads to this horrible problem that I’m not sure anyone else has. After a setback, I want to walk away from Sky Odyssey, but it’s just slightly not compelling enough to make me eager to come back to it.

One of the most striking things about Sky Odyssey is its soundtrack. It was scored by Kow Otani, who also did Shadow of the Colossus. It’s incredible. It’s intense. While Pilotwings leaned hard on some weird electro-jazz, Sky Odyssey feels like someone composed for a historical epic that got canceled, so they shifted all the tracks over to this flight simulator. When a pack of wolves is let loose in a concert hall, this is how an orchestra pleads for its life. It makes flying through a ravine sound like a climactic moment. 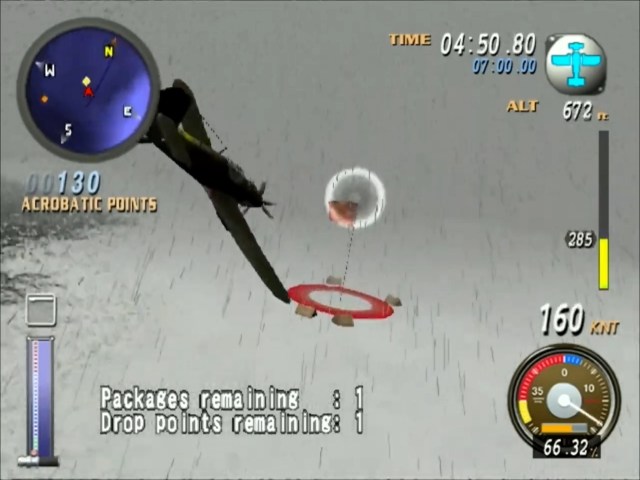 I think Sky Odyssey came out at the wrong time when we didn’t realize we’d be in for a rather homogeneous two decades of flight games. It’s like Citizen Kane: misunderstood in its own time but worth re-examining today. It’s Citizen Plane. Yes, I think I’m really clever for coming up with that one.

I can imagine two ways that Sky Odyssey could be improved for a sequel. The first is simply to move it to modern hardware so more severe weather situations could be incorporated. Things like tornados, for example. The second way would be to embrace the ridiculousness. Add in aliens, end-of-world weather, and make me fly to space or something. Activision or Sony or whoever owns the rights, give me a call, and I’ll put together some design ideas. Except, I keep my phone on silent, so if I don’t pick up, I’ll call you back.