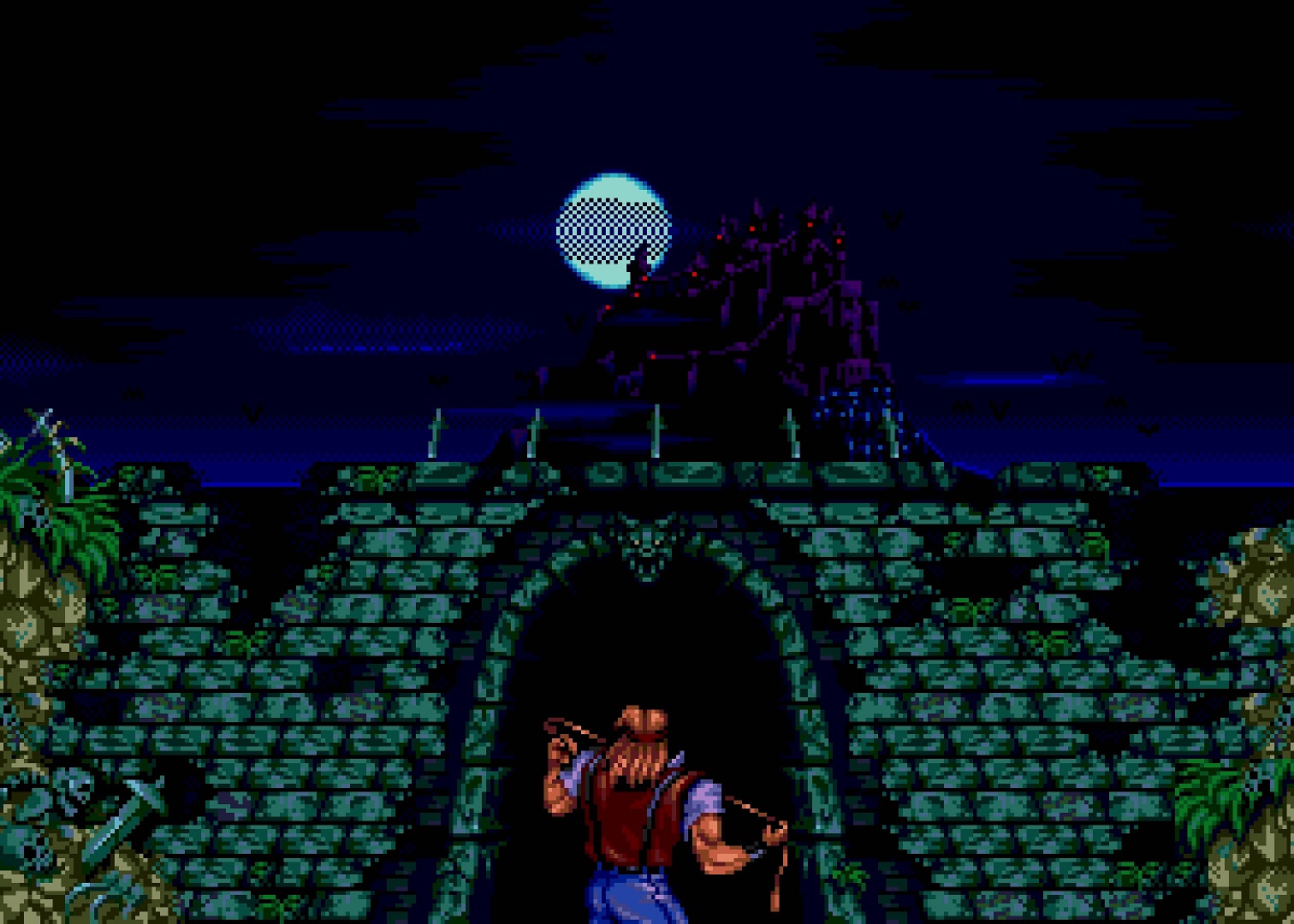 I hold no side-scroller in higher regard than the original Castlevania on the NES. It’s not the flashiest or more feature-stuffed game, but what it does, it does almost perfectly. The bosses could be better, I guess. However, perfection is a constantly shifting target, so I’ll take Castlevania as the closest we’ll ever get to it.

It’s probably why I prefer the classic formula of the Castlevania series over the later “Metroidvania” approach. Not that I have any distaste for it, but my preference is that tough-as-nails, level-by-level setup. It makes my thumbs feel like they’re flexing.

However, I’ve never met a Castlevania I love more than the first, and I’ve played most of them. The closest I’ve come to the same admiration was actually with Castlevania: Bloodlines for the Sega Genesis. The Genesis isn’t typically what you think of first when you think of Castlevania or even Konami, but it’s among the company’s run of completely stellar games they sent Sega’s way, and it’s one that shouldn’t be overlooked. 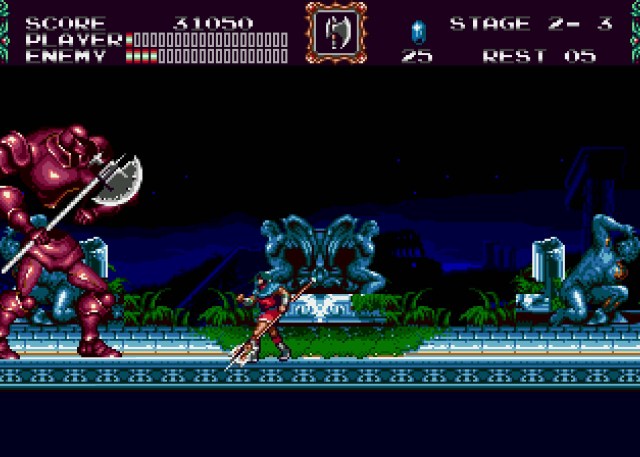 When you look this good, you don’t have to know anything

Castlevania: Bloodlines puts the spotlight on two of the biggest fashion disasters to ever walk the halls of Dracula’s Castle. You have John Morris, who wears suspenders with jeans, and to make matters worse, the suspenders go over his vest. Then there’s Eric Lecarde, who I appreciate for rocking a skirt, but its pink hue is a little much. At least he didn’t break any laws. Actually, Castlevania: Bloodlines takes place in 1917, so there was probably some archaic indecency law that would have nailed him to the wall for showing off so much of his gams.

In any case, John Morris is the wielder of the Vampire Killer whip, and despite not carrying the clan name, has the moves of a Belmont. Eric Lecarde, on the other hand, has a trident and can attack in more directions, making him the better choice. Eric also has a high jump that gets him onto out-of-reach platforms, while John can use the whip to swing over gaps. That’s where you get your branching paths, though they never lead to something as cool as entirely different levels like in Rondo. 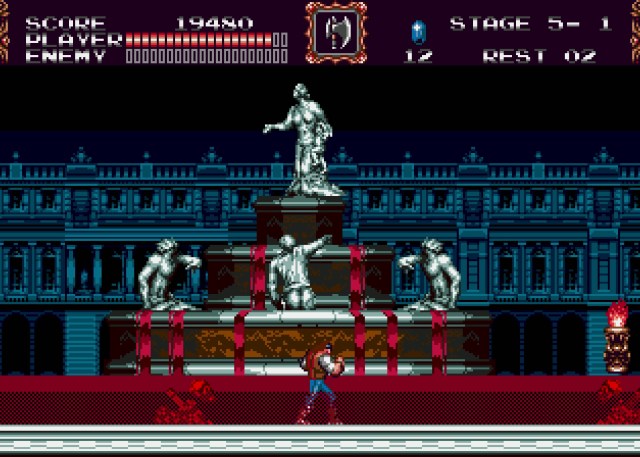 We need to talk about butts

There are a few things that separate Castlevania: Bloodlines from other games in the series. The major one is the fact that it definitely has that Genesis ‘tude. The music, the graphics, and the design all have that ’90s Sega edge. There’s even blood in the North American version, and I think I even saw a butt. It was on one of the statues in the Versailles stage. I’m going to affix a screenshot here of the alleged butt, and need a consensus here, so please let me know if you think it’s a butt.

Butts aside, the fact that Castlevania: Bloodlines takes place all across Europe, rather than just in Romania, helps it stand apart. Each of its levels are entirely unique, both in setting and obstacles. You start off in Dracula’s Castle, but you then go off to Atlantis, a trippy version of Pisa, and a German munitions factory on your journey. Most Castlevania games don’t really go past Dracula’s front yard so it’s nice to have a European vacation. Why are there mummies in Pisa, though? Shouldn’t they be in their natural habitat: The British Museum?

The bosses are also some of the better encounters in the series. While the typical Castlevania boss just has you attack their shins until they fall over, Bloodlines prefers bosses that keep their weak points out of reach until you have an opportunity. To add to the Genesis feel of the game, there’s one that looks torn straight from Vectorman. They’re nothing too groundbreaking, but when you compare them even to the ones in Castlevania: Symphony of the Night, they’re a bit more stimulating. 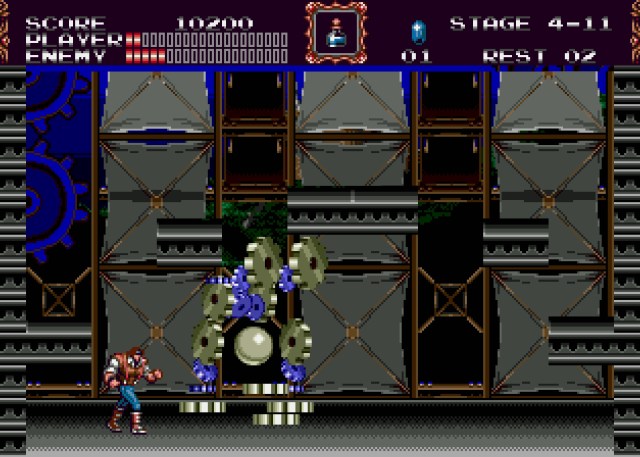 The soundtrack is great, but it definitely isn’t the most memorable in the series. It is, however, one of the first times when I noticed a discernable difference in the sound processors of an early Model 2 Genesis and a Model 1 or later revision. There’s this awesome bass sound that a few of the tracks use, but on an original Model 2, it sounds more like a weird crunch. It’s not a game-breaker, but it’s worth hearing the tracks as they’re meant to be.

The biggest embuggerance in Castlevania: Bloodlines is its reliance on limited continues. This is something that, to my knowledge, it’s alone on, but it’s also something Konami loved to do back in its early days. You have a small handful of lives and continues to complete the game, but strangely, there’s a password system. The password remembers how many lives you dropped, but it does mean that you can repeat levels that you do poorly on and improve your stock through foresight.

Limited continues, and passwords shouldn’t co-exist in the same games. Limited continues shouldn’t exist at all, but it is a relic of bygone design. Castlevania: Bloodlines isn’t the most difficult in the series, but it isn’t easy, either. Notably, the game caps off with a boss rush, meaning it’s not unlikely that you’ll get to the end of the game and then have to start over again because your clairvoyance wasn’t able to warn you of the various patterns you’d be going up against. Of course, you can use a password to try the last level again. See how pointless that is? 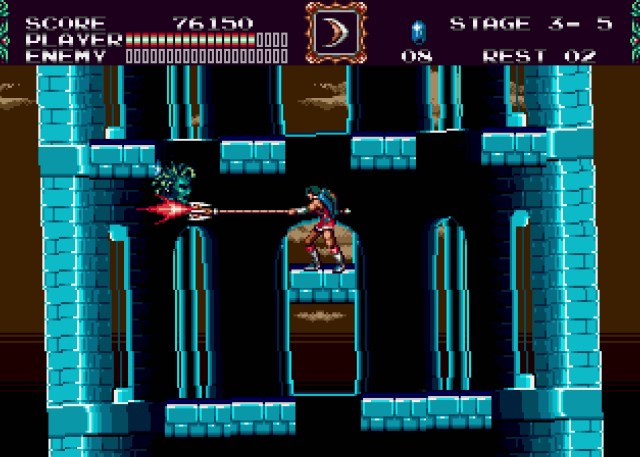 Miraculously, Konami hasn’t forgotten about Castlevania: Bloodlines. As easily overlooked as it is, they not only included it in the Castlevania Anniversary Collection but also in the first Genesis Mini console. Considering they didn’t, for some reason, include Rocket Knight Adventures, I’ll take that as a win. It’s especially important since original Genesis copies of the game sell for quite a bit on the collector’s market.

I don’t want to downplay my affection for the Castlevania series. There are a lot of games that I love, but the internet has conditioned me to want to rank them. In that sense, I’d place Bloodlines right behind the original Castlevania at the top of the list. It does quite a few things that were never again replicated in the series, all while maintaining a level of quality that puts it at the top tier of the series. Don’t let the suspenders and skirts fool you; this is a title you’ll want to sink your fangs into.