This game may result in tooth decay

The Turbografx-16 is a frustrating system to collect for. A lot of the library is ports, either from arcade or other systems. Almost any game worth playing is going to set you back quite a bit, and if you want to play anything on the CD add-on, good luck. I once offered to swap out the capacitors in a guy’s TurboDuo console, and it was like performing open-heart surgery on the king of the moon. More capacitors than I had ever seen on a retro console, all tightly packed. I did it, though, and immediately regretted only charging for the parts.

I have a bit of fondness for the little console that totally couldn’t. If I had to pick a favorite game out of the eight that I own, it would be Air Zonk. I was going to say that’s probably because I’m not a huge fan of shoot-’em-ups, which is the corner of the TG16 library most people love the most, but then I realized Air Zonk is a shoot-’em-up. 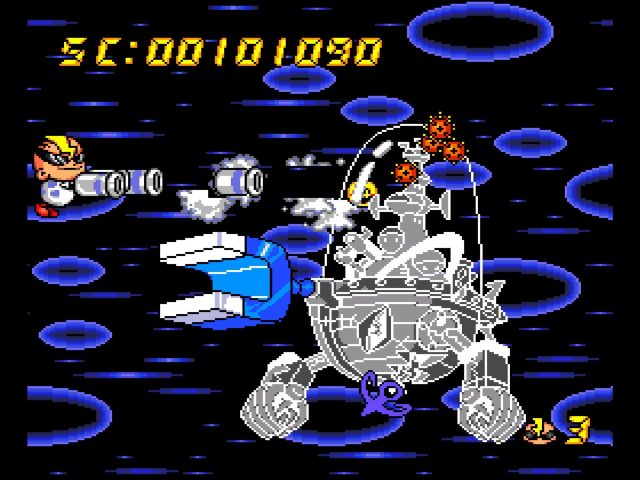 Technically a spin-off of Hudson’s homegrown Bonk series, the relationship actually makes things weirder. The Bonk series was this quirky little game about a hardheaded caveman, but Air Zonk takes things into the future. Zonk is like some sort of futuristic, robotic version of Bonk. But, like, cooler? I’m having a tough time describing this game.

It’s basically as if Mad Magazine wanted to make fun of Astroboy. Zonk flies around with jet boots, shoots out of his hands, and wears shades. The proportions are exaggerated in a grotesque way and there are lots of visible veins for some reason. The power-ups come in these little capsules shaped like the stereotypical meat on a bone that is common in caveman cartoons.

Outside of the aesthetic borrowed from Bonk, the game is sickeningly colorful. Don’t mistake that as criticism, however — the art style is incredible. The bosses are weird monstrosities that look like they belong in a Fleischer cartoon. The backgrounds are detailed and flashy. They’re incredible, chaotic, and detailed. Better yet, they change throughout the level, giving more opportunities for visual treats. 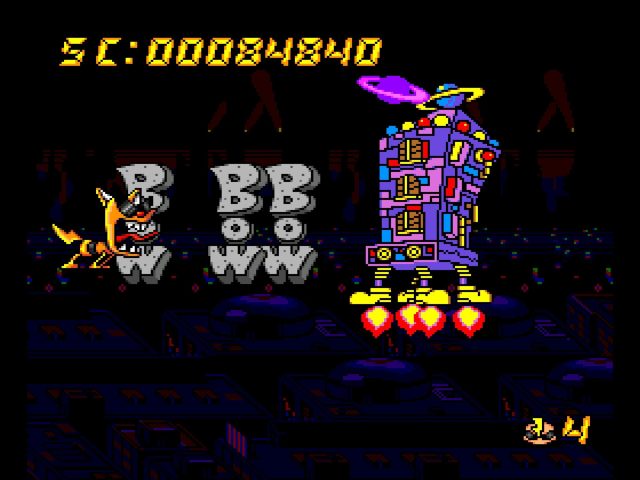 The main draw for Air Zonk is easily its partner system. You get to choose from a frankly ridiculous selection of weirdos. They range from a cow, a bulldozer, something that looks like a mole crossed with a gumball machine, and a missile. All of them wear sunglasses because it was the ‘90s, and it still gets better.

Your partner shows up when you collect enough happy faces and cap it off with one wearing sunglasses (you can probably see something thematic developing here), and they go to work helping you out. But then, if you continue collecting faces, you can merge with your partner in a disgusting amalgam. You’re temporarily invulnerable after which you’re still paired with an awesome weapon. 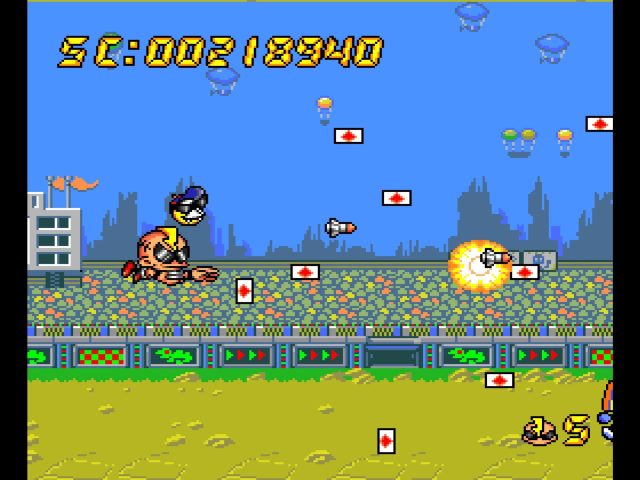 Even without the partners, as stupidly awesome as they are, Air Zonk still has it where it counts. There’s a lot of different weapons you can grab. All of them have unique charge attacks and developing a strategy with them can make a big difference. Charge long enough and Zonk will just drop this huge warhead that blows up the screen and, listen, it’s amazing. It’s a spectacle.

If this wasn’t sweet enough, the music is excellent. It’s quirky and energetic, just like everything in Air Zonk. It’s hard for me to describe a soundtrack as being anything more than awesome. It’s like the musical equivalent of Sour Patch Kids. It’s sweet, then sour, then your tongue feels like it’s covered in fuzz. I don’t know, just listen to it. 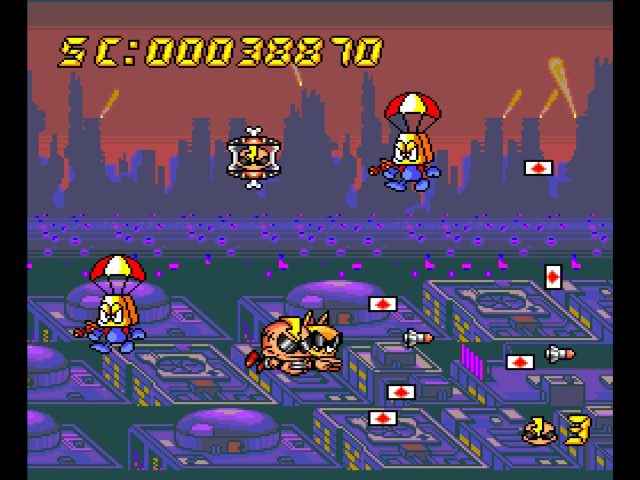 It’s not all sunglasses and fuzzy tongues, however.

The biggest downside is that Air Zonk is short. Like, demo short. It’s five levels, and yeah, maybe you’ll have to retry them when you run out of lives, and yeah, maybe the final boss rush might leave you in severe pain, but that doesn’t change the fact that there’s not a whole lot there. You’ve seen it in under an hour. That or you’re spinning your wheels retrying the same levels, which isn’t much fun either.

There are three different difficulty modes, and you can try for the coveted no-continue run, but… I’m not about that life. 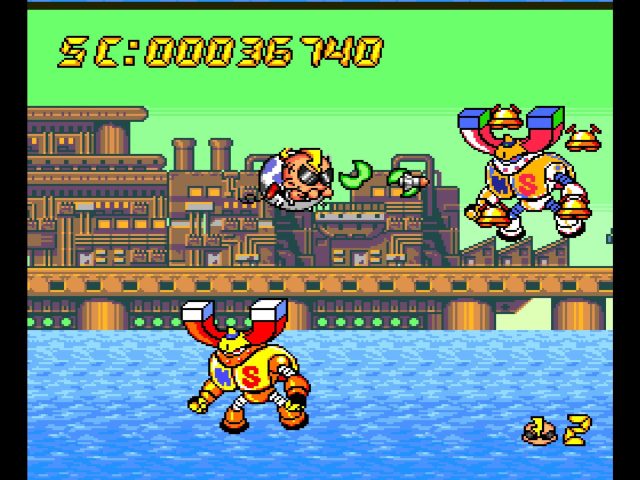 To sum it up, Air Zonk is an incredible sugar rush. You feel great during the brief period that it’s happening, but then it’s time to chug another energy drink or take a nap.

It really feels like a demo. It’s like I’m playing a pre-release preview version of the game. There are so many partners and power-ups, and then there isn’t enough length to get off the runway. It’s bewildering. It’s amazing, yet unsatisfying, like if someone gives you a single two-bite brownie.

There was a sequel, Super Air Zonk, for the Turbo CD. Because of its format, I haven’t played it, so I can’t really give an opinion — but the people I’ve spoken to say it’s disappointing. They seem fixated on the lack of parallax scrolling in the backgrounds, and maybe the music isn’t as good. Again, I can’t really comment, that’s just the ground vibrations.

What I can comment on is Zaku, a homebrew game on the Atari Lynx of all platforms. It was heavily an homage to Air Zonk, though it brought its own personality to the table. I’d like to see it ported to something that people actually own since it’s a pretty effective callback to my precious TurboGrafx game.