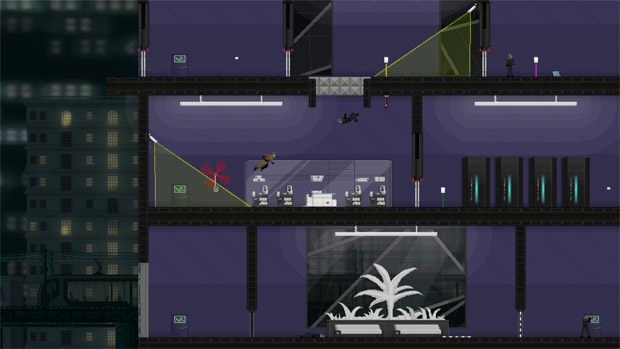 Developer commentary and other extras offered as DLC

Now through Thursday at 4:00pm Pacific, the stealth puzzler Gunpoint is half price at $4.99 on Steam. Fraser gave the game a 9.5 out of 10, so you know it’s on the level. In addition to the sale, some other exciting stuff is happening should you already own a copy.

The Special and Exclusive editions of the title are now available as DLC, and they’re also discounted in this sale. The former is $9.99 and includes the soundtrack and developer commentary — which you can stop by shooting the in-game versions of Gunpoint‘s developers. Rad. As for the $14.99 Exclusive edition, you’re getting a 40-minute making-of video, playable Gunpoint prototypes, bonus tracks, and your name on the team’s beta access list for future titles.

Lastly, there’s now Steam Trading Cards, if you’re into such things. (I can quit any time I like.) Steam Workshop support for sharing custom levels is planned, as are ports to Mac and Linux.