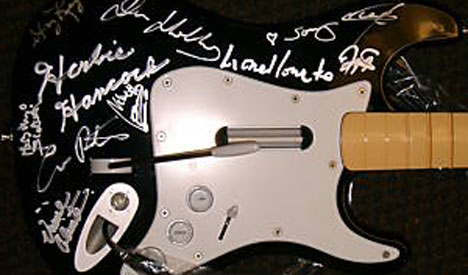 Sure, maybe you already own Rock Band. But is it signed by Grammy award-winning jazz musician Herbie Hancock? Yeah, I didn’t think so; your copy of Rock Band fails.

While rubbing elbows with celebs at this year’s Grammy awards, Harmonix had the pleasure of playing their game with the legend (and the Pussycat Dolls, from what I understand, although I may have just dreamed that). Thinking on their feet, they had Hancock and some of his musician buddies sign a special edition Xbox 360 bundle.

They refused to give it to me; death threats mean nothing to the folks who put God damned “Green Grass and High Tides” in their last game. The bundle was put up on eBay, however, and the proceeds go to a good cause — the Elizabeth Glaser Pediatric AIDS Foundation.

At the time of this writing, the bidding is at $150, which is cheaper than the bundle costs at retail. Uh, did we mention that it’s signed by Herbie motherf***in Hancock and that the money goes towards charity? Let’s move, people.