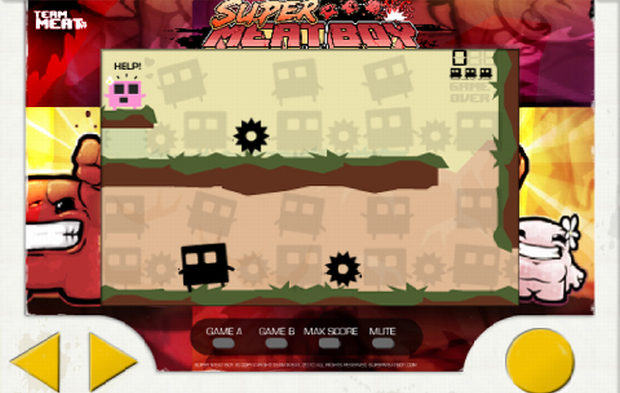 Man rants about the App Store, complaining that iPhone versions of games like Street Fighter IV are just soulless brand-whoring like the old Tiger LCD games we played as kids.

Company takes offense at Man’s rant, removes his ridiculously expensive game (so priced to prove the inanity of the App Store and its users) from its application service.

Man retaliates by making a Tiger LCD version of the game he is currently working on, and releasing it on the same App Store that spurned him.

Irony collapses into irony. The snake eats its own tail. Super Meat Boy becomes one with the universe.

The Super Meat Boy Tiger handheld app is pretty awful gameplay-wise, but that’s kind of the point; for only 99 cents, you, too, can own the most mechanically uninteresting, comically inspired game on the entire App Store. At the very minimum, buying the app will still support Super Meat Boy‘s production.

Remember way back in the day when you loved a game so much that you
would buy ANYTHING that had to do with it? Remember Easter, when you
had to go to your Great Aunts house to celebrate with the family, and
you knew you would be bored in the car and the only thing you could
bring was a crappy handheld version of some game you loved (for me it
was Megaman 2) and you had no choice but to play it in the car and at
her house because she was born in like the 1890’s and didn’t even have
a VCR? Those were great days…and now, we at Team Meat, are giving
you the ability to do that ALL OVER AGAIN ON YOUR IPHONE, IPOD AND
EXPENSIVE GIANT IPOD (IPAD).

Super Meat Boy Handheld is available on the iTunes AppStore for only
$0.99 (THAT’S NOT NINETY NINE DOLLARS YOU SILLY PEOPLE). Pick it up
today, brag to your friends, and support Super Meat Boy!!