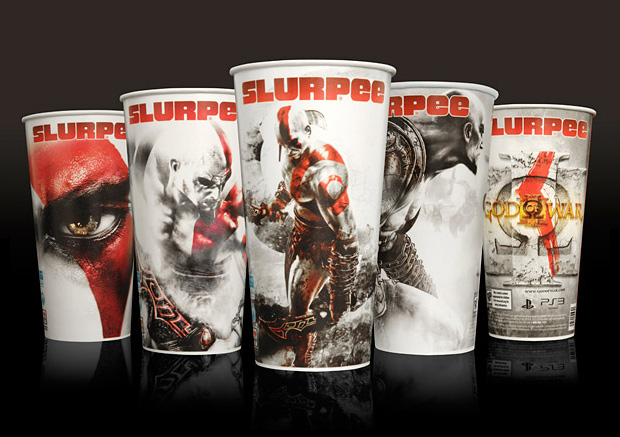 If you like videogames, you probably visit 7-11 fairly often — or so Sony and 7-11 hope, anyway. Ad Age reports that the companies have joined with Mountain Dew, the nectar of the gods as far as gamers are concerned, to put together a major marketing campaign for God of War III that begins on February 1st.

Mountain Dew and 7-11 have created a new Slurpee flavor, dubbed “Kratos Fury,” that the convenience store chain will be selling in four different God of War-themed cups. (If you’re wondering what Kratos Fury tastes like, the flavor is apparently a mix of blackberry and blood lime.) Each cup comes with a code for some God of War III downloadable content, including making-of videos, a Kratos premium theme for the PS3, a PC wallpaper image, and in-game armor. Dew-craving God of War III buyers will also be able to find DLC codes on neck tags on two-liter and 20-ounce bottles of the yellow-green soda.

Ginger Kraus, Sony’s Senior Director of Marketing Alliances, confirms what we all know in our hearts to be true, saying, “7-Eleven’s core target is the 18- to 34-year-old male who is right in the sweet spot for this game.” I am a 23-year-old male. I like Slurpees. I love God of War. That’s a bingo!

As you might expect, this is just the start of a massive advertising push from Sony for this marquee game. They’ve dropped the price of the God of War Collection, which has already sold over 380,000 copies, to $29.99. More marketing and promotions are on the way, so get ready to see Kratos’ ugly mug plastered all over billboards in your town leading up to March 16th, when God of War III will finally launch.

Filed under... #Cooler than the other side of the pillow#DLC#Food#God of War