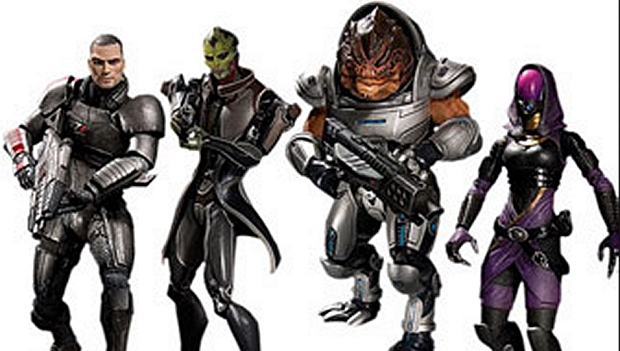 Apparently not content with having you buy bottles of Mountain Dew to get Mass Effect 2  DLC, it seems EA and BioWare have gone one step further, bundling download content packs for Mass Effect 3 with its official line of action figures. Store listings note that each of the eight Mass Effect 3 figures – ones for Miranda, Garrus, Legion, Tali, Mordin, Grunt, Default Male Shepard, and Thane – will come with a code that can be redeemed for DLC on the North American Xbox 360 and PC versions of the game. No word was given regarding the PS3 version.

According to the BioWare store page, the content itself will be “slightly randomized during the registration and could include powerful new weapons and new characters. The pack could also include character boosters, weapon modifications, and weapon upgrades to make your multi-player squad stronger.” I guess that “slightly randomized” bit should keep folks from just copying the codes and disseminating them, which was exactly what happened with the Mountain Dew tie-ins.