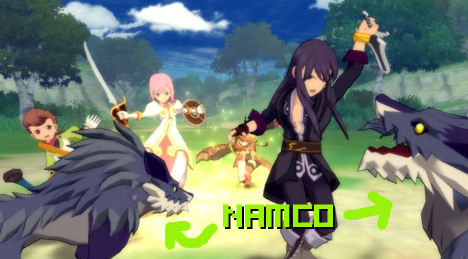 There’s a reason why people call the company Scamco Bandai, and that’s because Namco’s approach to DLC borders on the insulting. Not content to sell incomplete games at retail and charge people for stuff that’s already hidden on the disc, the dhampirs have now hit upon an even more outrageous scheme — charging you cash to download level ups in Tales of Vesperia.

Yes, for a mere 300 MS points, any pitifully lazy gamer can jump up ten levels or “earn” himself 300,000 Gald. Yes, you too can defeat the object of the game thanks to Microsoft’s Monopoly money and reveal to Namco how pathetic you truly are. Here’s what you can buy for Vesperia:

Namco manages to continually astound me with this stuff, and I’m going off the company completely just because I don’t know what shady crap it’ll pull with each successive game. This kind of thing makes horse armor look almost acceptable, and I really wish Namco would stop abusing DLC and its customers in this manner.

The worst part is, someone will buy it and justify the whole sorry thing.