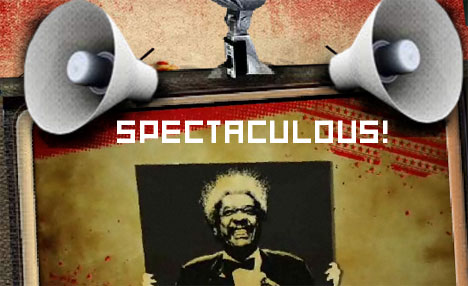 Let it be known that boxing promoter Don King is totally and completely bats**t crazy. And while there’s no doubt about that, the jury’s still out on 2K Sport’s upcoming boxing title, Don King Presents: Prizefighter. But as King himself declares, he can promote anything.

So promote Prizefighter he will, this time at the newly launched Hypekingdom.com. Whether or not the game is good has become irrelevant, because this is clearly the best Web site to ever exist on the Internet. With features like a Don King “Nickname Generator” (I’m Nick “Convict” Chester, thank you very much), and a dictionary so you can figure out what the legendary promoter is talking about, there’s at least ten minutes worth of fun here.

Disappointingly, the Mad Lib-style customizable hype spoken by Don King that’s promised in the press release didn’t work for me (it just kept “combinating”). But I’ll surely go back to check for Prizefighter screenshots and updates. Because when someone promotes a game by yelling “Buy my game,” you really don’t have a choice, do you?

Prizefighter is coming to Xbox 360, Wii, and Nintendo DS this year.

Learn the art of hype from the king himself, including creating the perfect nickname, self-promoting salvos using King’s voice, interpret King’s custom dictionary and more

May 28, 2008 – 2K Sports today announced it has partnered with the king of boxing and the godfather of hype, Don King, to launch HypeKingdom.com in support of the highly anticipated boxing video game, Don King Presents: Prizefighter.  Fans can now enroll in the University of Hype to learn the art of larger-than-life self-promotion, while getting new insight into the man behind the mania.

“To be the king, you’ve got to know the king, and HypeKingdom.com provides what you need to know to follow in my footsteps,” said Don King.  “You’ll also be witness to the spectacular promotionalization of 2K Sports’ Don King Presents: Prizefighter, the most exhilarating boxing title the world has ever seen!”

At HypeKingdom.com, fans can experience the thrill of being the king through the following features:

Don King Presents: Prizefighter will deliver the deepest, most authentic and entertaining boxing experience available. The life of a boxer is more than just a night at the fights; it’s about building a career and rising to stardom. In Don King Presents: Prizefighter, players must train, overcome adversity, get promoted and avoid temptation to rise in notoriety.  The story of their struggle to become champion unfolds in a unique, live-action sports documentary style that features real-life legends and current stars from the world of boxing including Ken Norton, Larry Holmes, Andrew Gollotta, Joe Calzaghe, and many others.  Heather Vandeven, the reigning 2007 Penthouse Pet of the Year, and popular video vixen Bria Myles, also star in the documentary and act as temptations for boxers throughout their career.