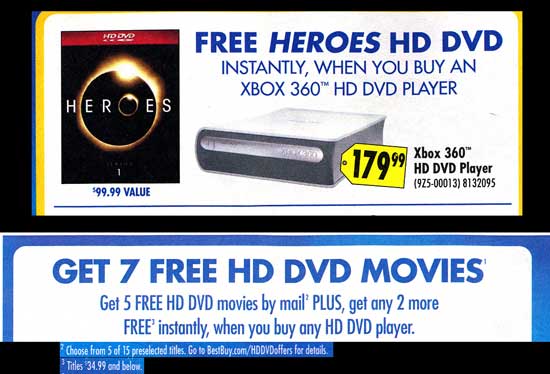 Raise your hand if you want to take Best Buy for a ride! The big box retailer are currently offering a free copy of Heroes: Season 1 on HD-DVD when you purchase the Xbox 360 HD-DVD add-on. Additionally, they’re also offering seven free HD-DVDs (two in the store, five by mail) with the purchase of any HD-DVD player. Hey, the Xbox 360 HD-DVD add-on is an HD-DVD player!

Since that second deal says any you can put these two deals together though they won’t like it. I got it to work today by doing a moderate amount of bitching and a call to 1-888-Best-Buy and they had to honor it.

To sum up, that’s $179.99 for an Xbox 360 HD-DVD add-on with a free boxed set of televisions most popular show, as well as seven other free HD-DVDs. Wait, make that eight free HD-DVDs — the add-on still ships with Peter Jackson’s King Kong. This is one deal that I think a “moderate amount of bitching” might be worth.