Today I played The Elder Scrolls V: Skyrim. Despite it being several hours ago, I’m still finding it hard to wipe the smile from my face. After smashing skeletons, slaying vampires, stealing horses and passing forged letters around in order to break up a budding courtship, one thought is running through my head. 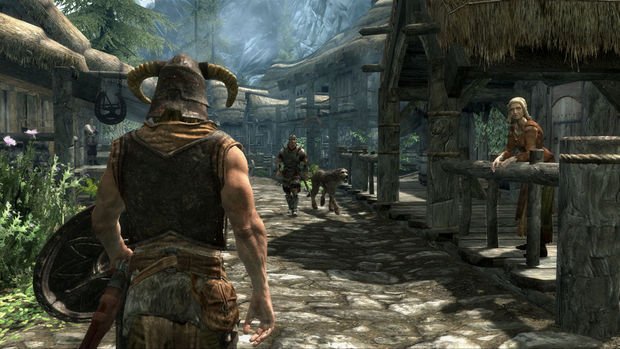 It is no easy task to condense the Skyrim experience into demo form, and it’s almost as difficult to write about it. Despite only having an hour’s taste of what the game offers, I already find myself with amazing stories to tell. For instance, I spent a giddy few minutes burning butterflies with Destruction magic and chasing frightened deer into a river. I stumbled across a hunter, desperately shooting arrows at encroaching skeletons. At one point I was ambushed by a pack of wolves and ended my fight by valiantly kicking the last one in the face and administering the coup-de-grace with a sword in the head. This is Skyrim — where crazy shit just happens.

Those familiar with former Bethesda RPGs ought to be delighted by just how intuitive and fluid Skyrim is. With a simple button press, a directional menu appears, highlighting skill trees, available magic, items and equipment. Pushing in the desired direction opens a sub-menu where you can add skills, equip weapons and magic, and drink potions. Compared to the cumbersome, busy menus of Oblivion, it’s a breath of fresh air.

Speaking of fresh, particular attention must be drawn to the new graphics engine. The stunning vistas are nothing short of inspiring, with open fields and sprawling mountains providing truly breathtaking scenery that makes one stand back in awe. It is particularly beautiful to see the land of Skyrim at night, with eerie blues and contrasting greys — making for a world that looks both peaceful and intimidating. Character models are fantastic when compared to the horrific Gamebryo humunculi that once haunted our dreams in Oblivion, and the conversation system, which subtly alters the camera rather than jarringly focuses on an NPC’s face, makes for a more natural experience. Other NPCs may also interject a discussion, which gives a greater sense of dynamism and drama to the dialog. 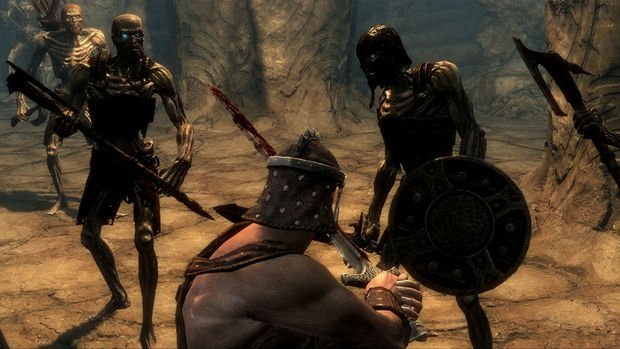 I got to play through the game multiple times and had a different experience with each. Once, I stumbled upon a town and partook in some interesting little quests, such as passing a fake letter to a woman in order to break up a relationship. Another, I amused myself by trolling NPCs — freeing prisoners from guards, stealing horses, and using my left hand like a flamethrower to cook anything that moved. Another run had me exploring dungeons to face off against conjurers who sent shimmering monsters after me, and vampires who weren’t shy about throwing magic around.

The combat system is intensely satisfying and helped make the vampire smiting feel quite pleasing indeed. While it retains much of the hack n’ slash action of previous Elder Scrolls titles, the ability to keep a magic spell bound to one hand like a BioShock Plasmid makes for incredibly flexible fighting. Fans of spellsword-type classes will absolutely adore what Skyrim can do. Magic, for its part, is far more effective than it ever was in Oblivion and when leveled up, spells can be truly devastating or immensely healing, depending on your flavor.

Those wanting to customize their hero will have a lot of work to do, with a character creator that’s more flexible than ever. Each of the game’s races can have every facet of their facial features tinkered with, and those with OCD problems will be able to spend hours toying with eye width, adjusting nose length, and choosing their favorite type of yellow face paint. Just be warned that using pre-sets makes it far too easy to make a frightening Captain Jack Sparrow lookalike.

To describe an hour of Skyrim is to descend into a gibbering cacophony of half-finished thoughts. So much can happen and there are so many stories to tell that it’s impossible to not attempt to describe everything at once. Rest assured, this is a game that will drop jaws and craft memories, a game that I feel will be talked about for a long time. Undoubtedly this is the roleplaying experience of the year.