Some of you seemed to enjoy my and Davis’s illustrated commentary at E3, so we’re chronicling this year’s PAX in much the same way.

While you’ll likely see indepth previews and news stories about the other editors’ PAX experiences over the next few days, Davis and I will attempt to give a casual (meaning, lots of curse words) overview of our weekend in Seattle.

More importantly, however, you’ll be able to check out a lot of cool new Ashley Davis drawings after the jump.

So hit the frigging jump, already.

Ashley: There were way too many! I can’t decide!

I will tell you what was NOT my favorite moment. Aaron Linde breaking his foot and missing the whole convention. 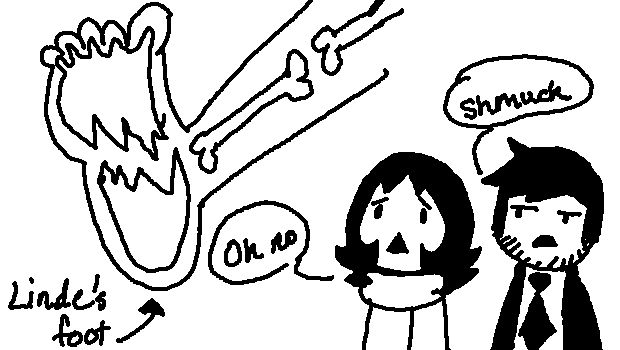 “Wah, I can’t get down the stairs in my own house. Wah, three of my bones are broken and I’m in excruciating pain.”

Ashley: What he means to say is “We hope you get well soon, Linde.”

Anthony: And that he’s a little bitch.

Or at least, favorite game, if you can’t make up your mind.

Ashley: My favorite game was Bit.Trip Void. I would say P.B. Winterbottom, but I didn’t actually play it. Something about all those eyes watching me suck at a game made me only want to stand to the side and watch.

Anthony: I did play Winterbottom, so it was my favorite. You’d think it’d be just like World 4 of Braid, but it’s way more fast paced, improvisational, and funny. Much more nonlinear. We saw a puzzle solved with ten clones, then two, then only one. I only wish Winterbottom‘s booth hadn’t been so far from the goddamn show floor.

But I really liked Void. The Nintendo dude said it was about “greed,” which is the cleverest thing I’ve ever heard a marketing dude say about a game. 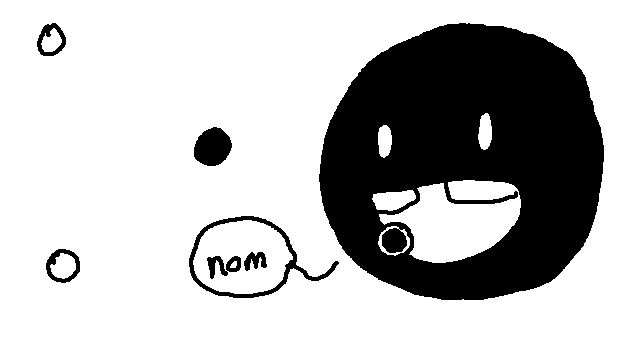 (It’s about gobbling up black dots to get bigger and increase a multiplier, but if a white dot touches you before you hit the A button and “bank” those points, reducing your size, you lose all the points you’ve collected.)

Ashley: I think it’ll be my favorite Bit.Trip game to date. The ideas it puts into use and the execution are fantastic. It’s also a lot easier to control than the other two.

But it does get hard pretty fast.

Anthony: What else did we play? No More Heroes 2, which was frighteningly misogynistic but had slightly more interesting combat (treadmill carpets, more weapons, etc).

Ashley: Well, you got to play most things because I didn’t want to hold up the lines. So I mostly just watched.

Seeing Heavy Rain in action was very neat. Each person (us included) played out the scenario in pretty different ways, though we didn’t get to see anyone sneak out of it unharmed. 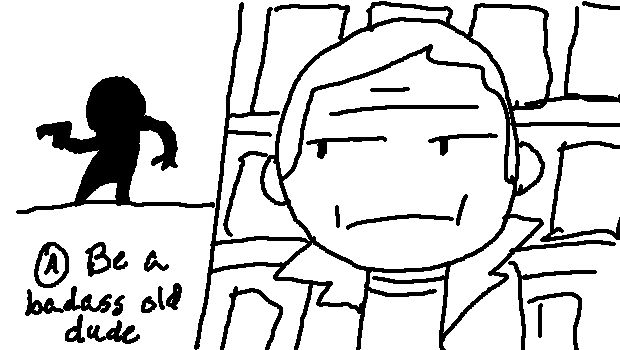 Anthony: Yeah. First guy tried to sneak up, but grabbed a bludgeoning bottle too quickly (using the right analog stick, of course) and got seen. Second guy successfully knocked the robber out after grabbing a frying pan, catching a box of cereal as it fell of a shelf to mask the noise with the triangle button, and finally using a jerk of the sixaxis to put the bastard down for good.

Then I played and intentionally got shot.

That’s how I roll.

Ashley: But you did die playing The Saboteur.

Which wasn’t bad. Interesting enough in some ways to make me almost forgive the same old Killin’ Nazis For Revenge An’ Profit plot, though the shitty driving controls from Mercenaries 2 make a reappearance.

Come up with a favorite overall moment yet?

Ashley: I don’t know. Would it be narcissistic to say that it was the panel I got to kinda be in? 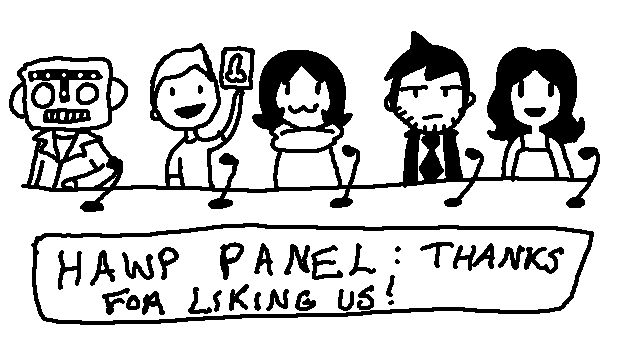 Anthony: Depends on why, probably.

Ashley: The reason why is because all of those people smiling and laughing back up at us made me feel all good inside.

Though that was more for you and not me. But still!

Anthony: They cheered when you said Tetris Attack was your favorite game.

Ashley: I’m talking about the HAWP panel, by the way.

And even more for your dad saying “Thanks”.

Anthony: Or “Howdy.” I’ll never be as beloved as him.

What about meeting the community?

Ashley: Crap, that should have been my answer. Can I go back and change that?

You hate the community, obviously. 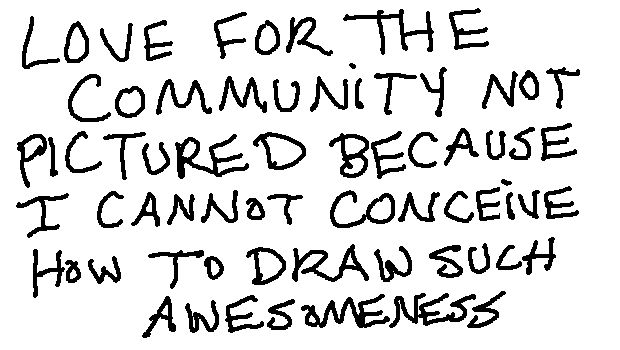 (Also, just to get it out of my system: Shank was fluid and fun but unoriginal, Left 4 Dead 2 felt fantastic thanks to the Jockey, Borderlands isn’t meant to be played for only three minutes, and Red Dead Redemption could actually be quite cool).

Anthony: (Also Scrap Metal was pretty much what you’d expect, but very solid.)

(And “Game 3” by The Behemoth is unplayable to colorblind people [i.e., me.])

Ashley: They’re the reason why I’m so drowsy at the moment. I got very little sleep the whole time just because I wanted to keep hanging out with everyone.

(Too many games to talk about!)

Anthony: Stella gave us little plush versions of our own heads. And bushofghosts gave me a flask.

For, like, no reason. I dunno what we did to inspire the community to be so frigging nice to us.

Ashley: We wore those heads around the whole time on our lanyards, like witch doctor-esque shrunken head necklaces. Except way cuter. Such an awesome gift. 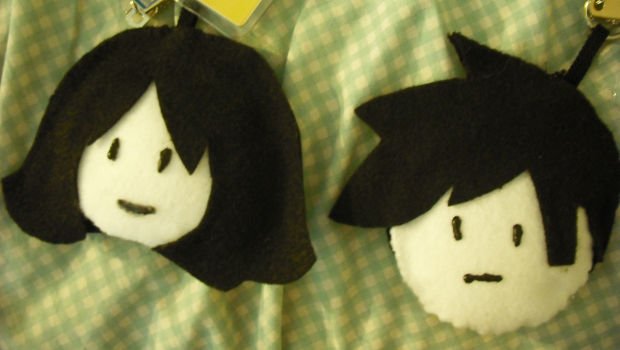 We were both met with an insane amount of kindness and love, which blew me away. It’s hard to understand just how many people’s lives you touch until you meet the community for the first time.

Anthony: You say “lives we touched,” but I recall being mean to these people far more often than I was nice. I literally do not understand why we were treated so well.

Ashley: Maybe it’s because I was there. They didn’t want to kick you in the balls in my presence.

But really, it was so nice to meet everyone, and have nothing but niceness given back in return, despite my fourth grade level social skills. Dtoid community members are the greatest bunch of people I have ever had the pleasure to meet.

Anthony: I’d usually say something horrendously sarcastic like “they’re alright,” but yeah. They were frighteningly kind.

Except bunnyrabbit, who added “even if you are a fucking twat a lot of the time” to the end of every other sentence he spoke to me.

But fuck that guy.

Ashley: Anthony only speaks for himself. I love you!

I love you all!

Do you want to talk more about the panels you were a part of for everyone who was not there?

Anthony: HAWP was really good and holy shit I never realized that many people actually watched/liked us. Dtoid panel was great thanks primarily to Chad’s musical number, which he almost pussied out of doing until we goaded him an hour before. The review panel was alright.

At the start of the HAWP panel I got the audience to do the wave in a bunch of different ways. I now want to do that every single day.

Ashley: Your power is not yet that great, my dear. 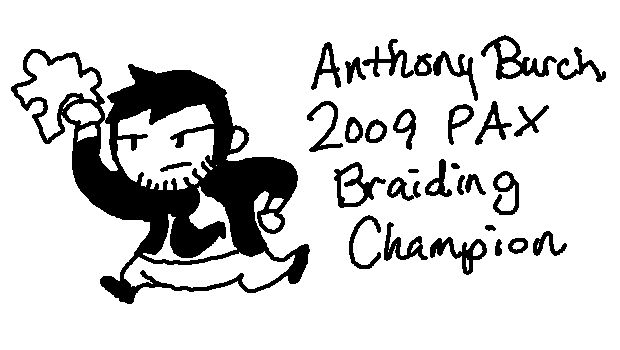 Anthony: I did win my first ever live videogame competition, though.

There was a Braid speedrun going on in the freeplay area.

And only two people entered.

And I was one of them.

And the other guy took so long the speedrun timer shut off.

Ashley: We never got to see if your time stood for the rest of the event.

Anthony: I’ll pretend that it did. 38 minutes. If anyone knows any better, tell me.

Ashley: I like to think it did, though. You’re so good at Braid.

Anthony: Which is the stupidest fucking game ever to be “good” at.

Ashley: No way, being good at Mario Kart Wii is way stupider.

We played that with Dr. Mario! 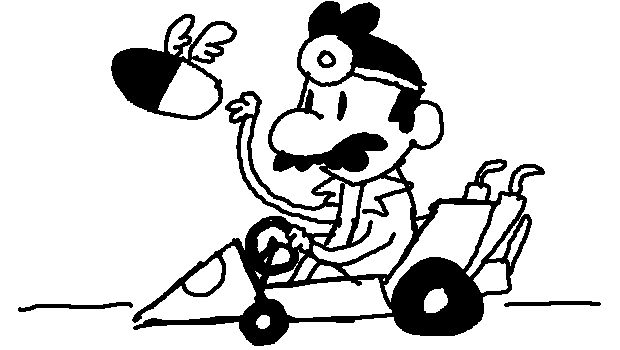 And that guy had dressed as Pokey the day before, as well.

Ashley: He was awesome.

I don’t think there was a day he was actually himself.

Ashley: Yeah, I dunno what I’m saying. VIDEOGAMES ARE FUN!

Anthony: (Fairytale Fights was violent but not terribly exciting.)

Ashley: (What is Bothering Carl? was made for kids but one of my favorite games of the PAX 10.)

Ashley: Do I really have to?

Anthony: If you want to be cool.

Besides, there’s other stuff to talk about! Like meeting Guybrush Threepwood and that cool person who was dressed up like a Heartless and eating cake. 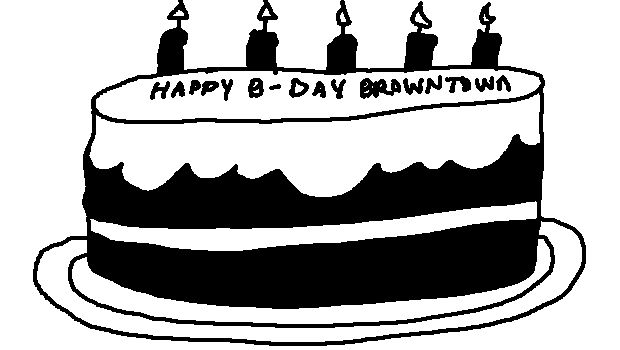 Anthony: I DIDN’T GET ANY OF THE CAKE. It was Samit’s birthday cake.

Ashley: You went to bed too early!

I had two pieces!

Anthony: WHAT THE FUCK WHY DIDN’T YOU WAKE ME UP

I SERIOUSLY DIDN’T KNOW PEOPLE WERE EATING THE CAKE

Ashley: I didn’t think you would want to be woken up!

Anthony: WHAT THE FUCK IS WRONG WITH YOU

YOU KNOW HOW I FEEL ABOUT CAKE

Anthony: Also there was a chick in a really awesome TF2 soldier cosplay who went to our panel and yelled “screamin’ eagles” and did all the soldier’s taunts and WHY THE FUCK DIDN’T YOU BRING ME BACK A SLICE OF CAKE

Anthony: YOU’RE FUCKING DEAD TO ME 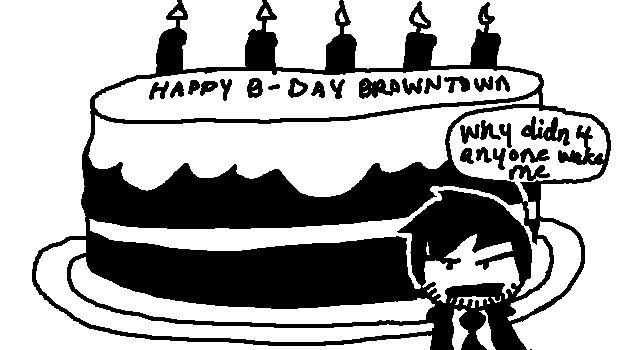 Ashley: That I wasn’t better prepared to mingle.

I wish I had brought a sketchbook and had time to draw for everyone.

I also wish, since we always have to talk about breakfast now, I didn’t have the french toast this morning. I forgot I didn’t like it that much.

Anthony: Scrambled eggs was a good choice. I regret nothing.